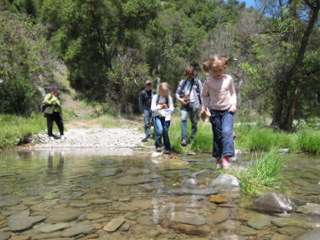 > 10 Reasons You Should Take Your Kids to Henry W. Coe State Park

10 Reasons You Should Take Your Kids to Henry W. Coe State Park

The second largest California state park, Henry W. Coe State Park is also largely ignored from the general public. At 87,000 acres, it is twice the size of the District of Columbia, could be a national park in other parts of the US, and yet only saw 38,000 visitors in 2010. We camped there with three other families over this Memorial Day weekend and I want to show you what you could do with your kids there, so you can enjoy this gem of wilderness and ranch lands.

Here are 10 reasons why you should bring your kids to this incredible park before school starts again.

1. Support your parks! Henry W. Coe is a park on life support. Generating only $100,000 in revenue last year with car and camping fees, Henry W Coe. is on the chopping block of the California state 2011 budget. Unless a solution is found, it will close in September 2011 together with 69 other state parks. if you don’t think that’s a good reason, read items 2 through 10 and think about what would be lost if the park closed. To support the park, you can also sign a petition on the website of the California State Parks Foundation.

2. Camp at Manzanita Point. Forget camping at the park’s headquarters. The views may be nice but you are missing out on a great opportunity to feel like you’re backpacking – with a car. We camped at the Manzanita Point group site #9, 2.5 miles from the park’s headquarters. The reason it feels so remote is you’re only allowed 1 to 2 vehicles per site, and only one trip in and one out. Of course, this requires some planning with your friends but a flatbed pick up truck does the trick for 3 families. Four of us adults hiked in, the rest drove. Once you’re there, imagine this: no RV engines humming next to you, no cars driving in circles late at night, no trucks banging metal while collecting dumpsters in the wee hours. Just listen to the sounds of nature – and possibly your neighbors partying but sites are fairly spread out so it shouldn’t be a problem.

3. Hike on beautiful trails. With its large size and four entry points on the borders, very little of Henry W. Coe’s wilderness is accessible for day hikes, even more so with kids. This park means some serious hills! However if you’re already 2.5 miles in at the Manzanita Point campground, you open up access to lesser known spots and awesome views.

On Sunday, we all hiked to China Hole, one of the best swim holes in the Bay Area. The total hike was a 6.6-mile loop from the campground, starting on Cougar Trail continuing on Creekside trail, Poverty Flat Road and ending on Manzanita Point Road. Total elevation gain: 1,300 feet. All kids from age 4 to 7 walked it. Not too shabby, according to my friend Jason who recorded the itinerary on his Garmin Forerunner 305.

4. Swim and splash at China Hole. Fed by an underground spring, China Hole is the most popular swim spot in the park. No wonder. This lovely lush spot on Coyote Creek offers a string of wading and swimming opportunities for all cold-water endeavors.

Located just a few hundred feet downstream from the confluence of the Middle and East forks of Coyote Creek and the gateway to the Narrows, China Hole is where we laid down our backpacks, changed into swim suits and let the kids play on the sandy beach or jump in 3-feet deep pools, while two adults went swimming in deeper parts of the creek.

While all the kids dipped their feet in the creek, only half of them decided to play with the water. Others started making “rock paint” by crushing two pebbles against each other, adding water and painting arms and faces. A couple played in the warm sand and even made sand angels. Good thing there was water nearby to rinse it all off!

5. Ford a creek on rocks. Finding the exact spot where your shoes won’t get wet while crossing a creek is intensely satisfying for hikers. For kids, crossing creeks is an even bigger deal as it involves combining good balance with sizing up skipping stones as potential bridges to the other side. We forded Coyote Creek on two occasions and both times the kids did great.

6. Swing in a hammock at the campground. Ever since we received a travel hammock as a Christmas gift 6 years ago, it’s been part of our camping set. Wherever you camp in wooded areas, you can always find two trees roughly 8 to 10 feet apart to hang this hammock. The kids will love you for it.

REI and Amazon.com carry a nice selection of ultralight travel hammocks made of parachute material, such as this Eagles Nest Outfitters Double Nest Hammock that weighs only a pound and can carry up to 400 pounds. It’s so light I might even take it on a day hike!

7. Improvise a swing. If you don’t carry a hammock or a swing in your car (I know, I know, they are such essentials), make sure you always carry 50 feet of solid climbing rope with you. Rope is a lifesaver on camping trips, working equally well as clothes line, jump rope or knot rope. You can also find a sturdy tree branch, loop the rope around (tie a rock at the end if you can’t get the rope past the branch) and hang a big stick on a noose at the bottom. Tie a few knots. Swing problem solved! Now kids, get in line and behave. The adults are busy relaxing!

8. Build a fort for the fairies. This has got to be one of my favorite activities for kids because it makes them figure out the basics of 3D construction with natural materials. My 2nd grader started building a fort with sticks and was joined by two friends.

Three forts and a little parental help later, they had a solid structure that could withstand a light breeze and kids running dangerously close around it.

The younger kids got interested and thanks to a fairy-making and a tea light/ping pong ball activity, turned the fort into a place where  the fairies could come and  play at night.

Playing with glow sticks later that evening on a backdrop of ping pong balls illuminated by the flickering light of battery-operated tea light candles, it was a magical sight.

9. Enjoy a campfire. The first night we camped, rain fell pretty steadily on us and almost none of us was prepared for the wet weather. Lighting up a fire proved the best antidote to keep spirits up and warming up the kids who were running around like mad gnomes.

The second night was glorious and the kids were hell bent on marshmallow roasting until the marshmallow supplies dried out. This they achieved, as well as some smeared white goo all over their hands, faces and clothes. Because you know, what better way to wipe off melted marshmallow than using your own sweater?

10. See some wildlife. I’ve come to the conclusion that a trip to Henry W. Coe has to include wildlife sightings. There’s just wild animals everywhere if you keep your eyes peeled.

On the way to Manzanita Point, we saw two wild turkeys wandering around the campground. They were the first of 4 wild turkey sightings over 2 days. At the campsite, we saw three big black hairy caterpillars with orange dots that turned out to be future checkerspot butterflies. Hair-rising cool because we didn’t know if they were venomous.

After I lifted a log in the fort building process, one of the kids identified a big animal that lived inside the log and was attempting an exit: a scorpion! I put the log down (you bet) and we all got close, trying to see it from a safe distance.

This blurry photo was taken by my husband who was trying to wrangle the scorpion out of the log with a stick (without harming the beast) while pushing on the camera’s button and focusing.

Over the weekend we also had a deer visit us on our campsite, saw a couple more on the hills, my 2nd grader held a darkling beetle for fun and we heard a great horned owl call at night.

Now, will you believe me if say that you need to take your family to Henry W. Coe state park?

2 thoughts on “10 Reasons You Should Take Your Kids to Henry W. Coe State Park”