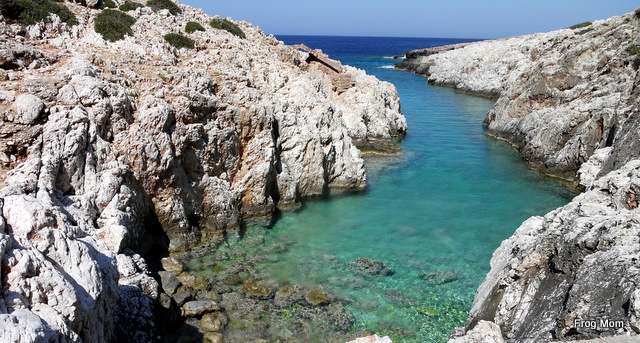 For brave souls who can tear themselves away from the beach, the Greek island of Crete offers beautiful trails to get in summer shape or just to see the island off the beaten path. I’ve selected four different family-friendly hikes in Crete that range from short (0.5 mile) to long (10 miles) and sorted them by theme, so you can choose the one that fits your mood. Based on popular teen fiction books, Greek mythology or unique nature spots, they offer great authentic outdoor days in Crete far from the crowds. They’re all kid- and grand-parent-approved, as we hiked them with my two girls (8 and 10 years old) and my dad (74 years young). Three of them offer secluded swimming spots (no crowds guaranteed), so don’t forget costumes in your backpack! 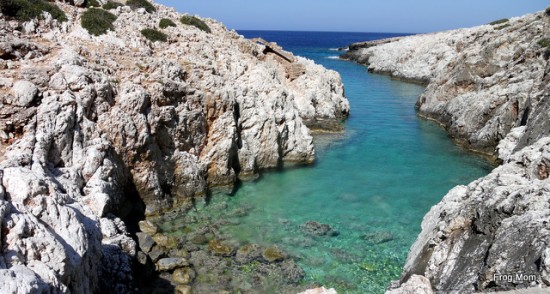 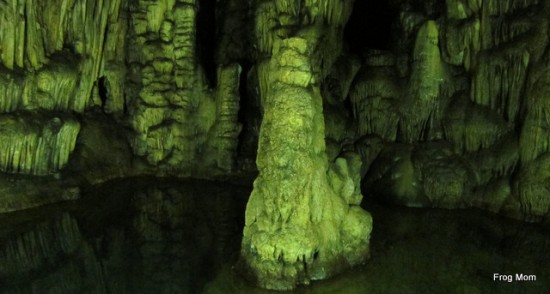 Out-and-back. Half a mile up a pleasant trail, roughly 200m elevation gain. If you insist, you can also hire an authentic Cretan donkey (hush, don’t tell anyone). Fresh orange juice bars at the parking lot.

According to legend, it was in the Diktean Cave that Zeus was born to Rhea. No traces of Zeus nowadays, but the Diktean Cave’s stalactites and stalagmites strangely resemble the monsters of the movie Alien. Up on the Lasithi Plateau where windmills flap their hollow wings above expansive fields of greens, the Diktean Cave is well-worth a family excursion.

From the parking lot – with a stunning vista and just-as-stunning orange juice – all you need to do is follow the only trail up the hill during 15 minutes to the entrance booth where you can buy your ticket. Or if you show up during rush hour, simply follow the crowds. I hear the place can be extremely popular, but then, how could it not be? Lit up with cave-appropriate low-heat lights, the cave features formations that take on fantastical shapes in the dark and nowhere else can you claim you’ve seen a cave where Zeus was born.

Inside the cave, a staircase takes you around the cave and above clear water pools where people throw money for luck. Sign that Greek Gods are still alive!

Come back the way you came and have lunch at the exquisite Vilaeti Restaurant where the owner distributes candied citrus zest to nice children.

FOR MYSTIC PIRATES: KATHOLIKO MONASTERY TO THE SEA HIKE 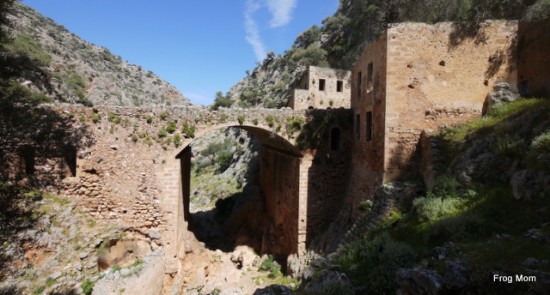 This hike is a real feast for the eyes and ends with a splash in a natural harbor, past a couple mystic caves and a steep canyon. The only hitch is you have to like stairs. Lots of stairs. We started at the Gouverneto Monastery, a Venetian-style fortress on the peninsula north of Chania. Across the walled garden, we passed a wooden door and came out onto a flat hilltop. From there, a path leads down the hill. The path quickly turned to stairs with an easy grade and within 10 to 15 minutes, reached an ugly concrete structure. Inside it was the entrance to the cave of Agios Ioannis, St John the Hermit. According to the story, John lived here in seclusion in the 6th century, having sailed from Egypt to Crete on his mantle. The cave is now a place of pilgrimage and inside, it features some nice stalactites and stalagmites. However the highlight hides up a few stairs in the middle of the cave. As you look down – and possibly flash a headlamp, you discover a rectangular water tank carved in the stone, a pool used as a baptismal font by pilgrims. It’s both striking and beautiful, as well as unexpected. 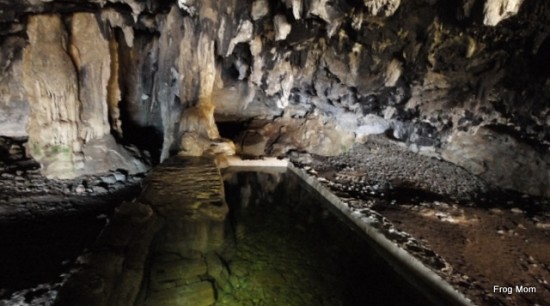 Out of the cave, you can walk back up (most people do) or keep walking down the ravine. We walked down. Past the cave, the steps became narrower and higher and as added perks, the wild scenery of the gorge opened up on the distant sea. Oh, what a sight! Better not be afraid of heights though. As the steps descended the near-vertical walls of the gorge, the path became quite steep. The reward came around a bend, when the steps led to a monastery carved in the rock, much like Petra in Jordan albeit small-scale. That is Katholiko Monastery, founded in the 11th century and abandoned because of pirate raids. It is breathtaking and the large arched bridge facing it is puzzling. It leads absolutely nowhere.

Staying on the monastery’s side, walk to the other side of the bridge and scramble down to the bottom of the gorge. Follow the gorge bed on a rough stone trail until you reach the hidden crystal-clear natural harbor. You can access the water on the left side (easy scramble) but beware of sea urchins who cozy up near the edge. My 8-year old can attest that it’s not fun tripping on one!

Come back the way you came and breathe in the smell of wild thyme in the gorge. 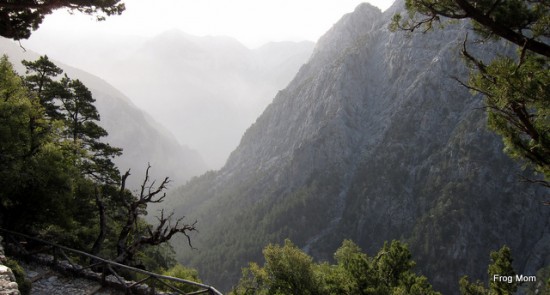 Reputed to be the longest gorge in Europe, the Gorge of Samaria starts on top of a mountain and finishes at the Lybian Sea 16km later. The place where you end up is a tiny coastal village with no roads connecting it to the rest of Crete. For most people, this means a tourist bus in and a ferry out. That’s arguably one hell of a hike, and perhaps the reason why so many visitors show up at 8am to hit the trail first thing in the morning.

We were lucky to visit the gorge on the second day of the season in April and the weather was heavenly. To say that we met more than two dozens hikers would be wildly exaggerated, but the summer season sees a thousand hikers hike the gorge every day. It can also get extremely hot and even with water springs spread along the trail, I can see how the hike would be unpleasantly hot. As always with iconic hikes, timing is essential. Fitness is crucial as well as once you’re on the trail, the only way out is the other end of the trail – or a rescue helicopter.

For our girls, the trail’s only challenge was how long it was. It took us six hours to reach the sea at a comfortably unhurried pace. Apart from that, it was very nice. The first two miles are a long downhill descent on a rocky path and the main diversion was coming across two donkeys carrying bags for the rangers. A tad unnerving were the frequent firefighting stations, reminding us that in case of a fire, we would be completely trapped and toast. 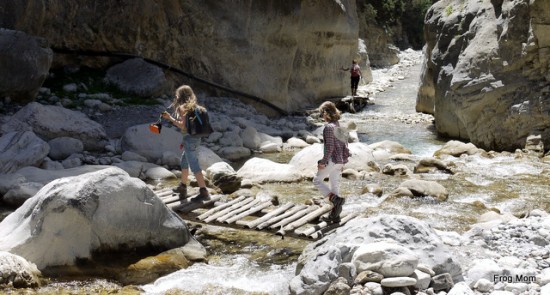 The real fun begins past the abandoned village of Samaria, a ghostly settlement whose shady trees provide a well-deserved rest stop. This village marks the almost-half way point and from there on, you cross a series of spectacular landscapes and it’s level all the way to the sea. My girls had a total blast crossing the river on stepping stones or wood bridges. The best part was probably around the Iron Gates, where we got to follow a wooden walkway above the stream under 1,000 feet of sheer cliff face. I know my girls would have liked that section to go on forever but from that point on, the landscape opened up and soon we were out of the national park. Late lunch at the village of Agia Roumeli was a non-remarkable affair and we had an hour to splash in the waves before taking the ferry. What a hike! I completely recommend using a tour operator for this trail, logistics can be a nightmare. 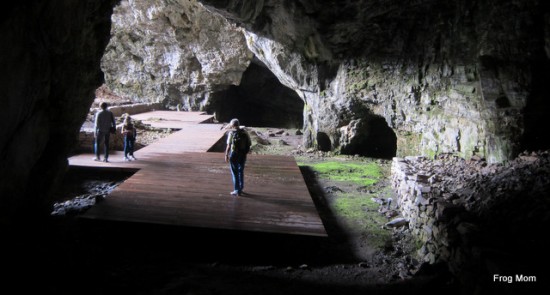 Out-and-back. 600m/less than half a mile. Easy hike. No facilities (at least in April.)

Percy Jackson, anyone? This has to be the shortest hike done after the longest route driven I’ve ever been on, but what spectacular mountains! On the flanks of Mt Psiloritis, the Idean Cave is is the place where Zeus grew up, sheltered from the fury of his father Kronos. It’s a fun place to bring Percy Jackson fans, even though you won’t have much else to do on the spot. That’s unless you want to summit Mt Psiloritis, always a 6-hour option.

From the parking lot, the cave is clearly signed and you walk past a charming whitewashed mountain chapel before joining the dirt road that leads to the cave. Most of its archaeological relics have been transported to the Heraklion Archaeological Museum, but the cave has plenty to get the imagination going. A gaping hole in the mountain, the cave features abandoned rail tracks outside the entrance, remnants of recent excavating days.

To get to the bottom, you simply walk down a long staircase that gets darker and darker until you hit the bottom platform. No geological formations down there, but two vast chambers and plenty of room for mythical daydreaming.

At the parking lot, don’t expect bells and whistles, maybe not even a toilet. Let me tell me you, these mountain bushes are terribly see-through. Be ready!

4 thoughts on “4 Family-Friendly Hikes in Crete”