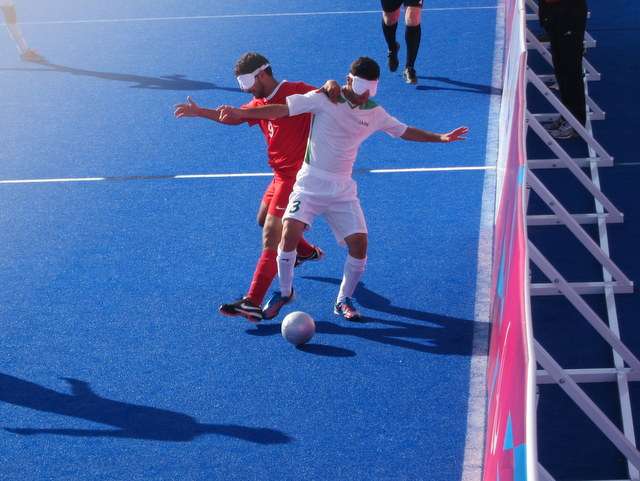 My girls started school in London yesterday and my 4th grader came back from class with a big smile and a surprise field trip. She had to wake up early the next morning to spend the day with her class at the Olympic Stadium – 5-a-side football as part of the Paralympics 2012. Yoohoo! She was ecstatic and before dinner tonight, I quizzed her about the experience so she could share it. With a soccer fan dad and 3 years of soccer league in San Francisco, she was psyched to see her first live soccer game. It meant even more to me as a parent that it was the Paralympics because sight-impaired people playing soccer just beats me. The way my daughter described the rules reminded me of a nature game I learned with my friend Susan Silber. It’s called Bat and Moth and teaches you about echolocation. As you read, you’ll see the analogy easily. Now fresh from the field, here is my daughter’s special Paralympics report!

As Told by An 8-Year Old

I woke up in the morning at 6 o’clock. I asked my mom to wake up and then I went to see my sister but they both said that they wanted to sleep 5 more minutes. So I went to my room and got dressed in white. In white I wouldn’t get lost on the way to the Paralympics because the teachers would be able to see me. Then I ate breakfast, I brushed my teeth and we took the Tube to my school. We were there at 7.30am. I saw my teacher and we had to give our paper so that we can go there on the field trip. After the whole class was gathered up, we went all the way to St. Pancras and onward with a train to the Paralympics stadium.

At the stadium we gave the tickets and got in. We were late for the first game. At first, I was a bit disappointed because the stadium was small and had a fake grass field. I expected a huge stadium like on TV. It was blind players playing football. The first team was from Iran and the other team was from Turkey. The players were blindfolded because otherwise the light would hurt their eyes. Since they couldn’t see, they heard the ball making noises. It went like a baby toy. The walls also made noises when the ball went on them. They sounded like someone beating a drum. The goalies, the referee and the people who guided the players by speaking could all see.

The game was kind of silly sometimes. For example, one person walked like he would imitate a mummy and ran into someone else. With the other kids we laughed but that was disrespectful. They still were very good players. In that game, Iran won 12 to 6 and the game was about one hour and a half long.

There was an intermission and everybody in my class went out of the stadium on a big area with picnic tables and played duck duck goose. I was “it” once and I tagged one of my friends.

When we went back into the stadium for the second game, we heard the music “We Will Rock You”. Everybody clapped their hands and stomped their feet while singing that song. Then they played a song by Justin Bieber and the second game started – Great Britain vs China. The game was a bit like the last one but there were more faults and penalties, especially for China. A penalty is when you can kick the ball into the goal with nobody blocking you.

The end it was a 1-1 score but there were 3 extra penalties – one Great Britain, one China and one Great Britain. They each got one point. So the referees decided sudden death – 2 last penalties. The first one who scores wins. China went first – we were all very afraid because we rooted for Great Britain. In the end, China scored and won the game 3 to 2.

Then we had lunch. I only had a bagel left because I ate all the rest while we were watching the games. The others said I was lucky to eat a bagel with cream cheese and smoked salmon. It was very difficult for me not to eat it before. It smelled so good. Then we got back on the train to the tube and back to school.

I’ve only seen real soccer games on TV. The blind people are sillier than the normal people but they are really good players.