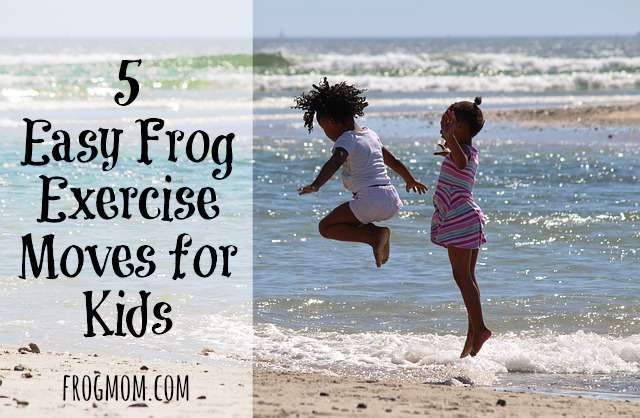 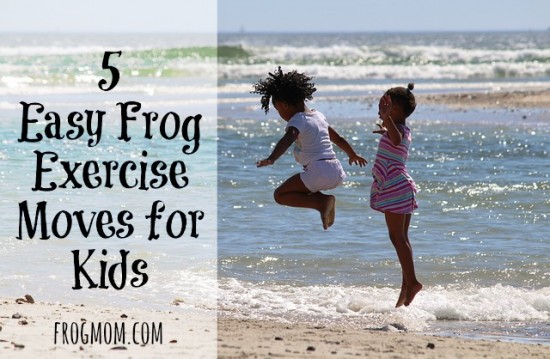 Get kids active outdoors with 5 easy frog exercise moves! This post is part of an educational Free Unit Studies series and this week’s theme is Frogs. Frogs being a pet peeve of mine, I am thrilled to create frog-based exercise moves for kids. Each activity is inspired by scientific frog behaviors, which means that the moves double as educational material on the humble amphibian. Not only are these frog exercise moves fun, but you won’t need any gear or gym equipment for them. Comfortable clothing and trainers will do. These moves would be great birthday party or school activities on a frog theme. Do you have a park nearby? Show some frog love as a family and get fit together! 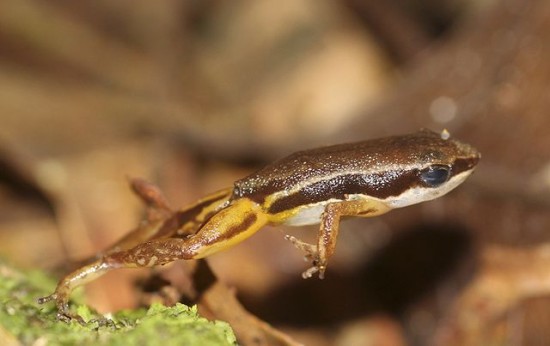 Frogs can jump pretty far, right? For instance, bullfrogs can jump up to 10 times their body length and some champion bullfrogs can do even better. At the Jumping Frog Jubilee of Calaveras County, the all-time record-holder, since Mark Twain wrote his eponymous short story, is a bullfrog named Rosie the Ribeter who jumped an impressive 7.15 feet (2.18 m) in 1986. That’s the equivalent of my 10-year-old, 150cm/5 ft tall, jumping more than 15m or 50 feet in one jump. Can you imagine?

The reason frogs can jump so far is because they use their stretchy calf tendons as coils to fuel their jump. Yes, their legs represent 1/4 of their body mass but that alone cannot account for how high or far a frog can jump. They also jump quickly and far to escape predators, a useful survival skill in nature.

For this activity, identify a starting point with sticks, rocks or leaves. It’s the jumping pad. The idea is do do 3 quick jumps in a straight line, as far as possible from the jumping pad where potential predators can be. That’s what a frog would do, before deciding what to do next and that’s how frogs jump at the Calaveras County Fair. Now, kids.

For science kicks, measure the overall distance and compare to the child’s height.

A variation of the frog jump is to do lateral jumps (sideways) to exercise different muscles, or to repeat the frog jumps during a whole minute. Full cardio workout guaranteed!

Science shows that there’s more to swimming like a frog than breaststroke. A study of the African clawed frogs, Xenopus laevis, a pure swimmer, showed that their propelling power in water came more from ankle rotation than from leg pushes. Yes, they do use their webbed feet to kick water backwards but towards the end of the push, they rotate their ankle for an extra humph. They also use their front legs but only for steering, which is really quite different from breaststroke.

Swimming is also a highly sociable activity for frogs as groups of young frogs are known to swim together in schools, much like fish. Last but not least, not all frogs are swimmers. Toads and tree frogs are essentially dry land animals but like their aquatic cousins, they need to come to the water to mate and lay eggs.

Note: this exercise is designed to be done on dry land. Nobody needs to get wet, unless they want to.

The idea is to replicate the swimming frog technique on dry land. There are two versions which I’ll explain below. 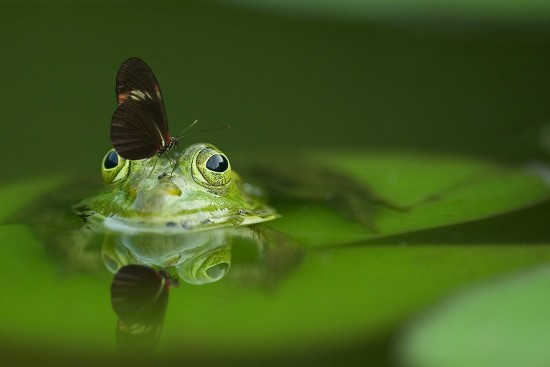 Do you know that frogs have an amazing eyesight? Their eyes come in a variety of colors from red, orange, and yellow to metallic copper, silver, bronze, and gold. In most frogs and toads the pupil is horizontal, but many are vertical and some are even round, triangular, heart-shaped, hourglass-shaped, and diamond-shaped. Pretty cool, right? Besides being beautiful, frog eyes are also very well located for maximum bug-catching chances. Located high on the sides of the head, frog eyes offer front, side, and partially rear views, and all while the frog is mostly under water. When the see something moving like an insect, they’re on it immediately. Now to the crux of the matter – catching bugs.

This game is played in a group and over an open area big enough so that kids can walk fast over 10 m/30 ft minimum. The idea is that insects try to make it across a pond without getting eaten by a hyper-vigilant frog. 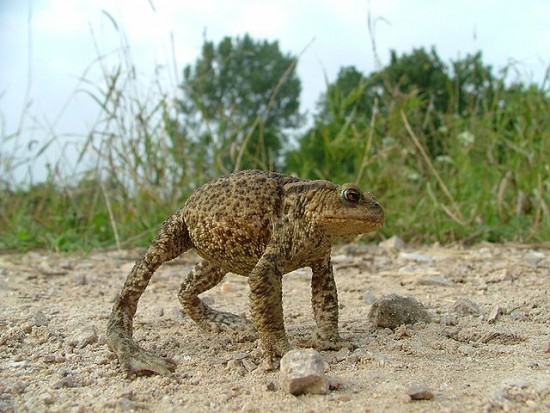 Efficient defense tactics keeps frogs alive and happy. Of course, frogs can run (or hop away) to escape from predators, but some frogs use colors and do not jump away from predators. Instead, they sit or stand in such a way that they show off bright colors on their bodies. The toad above has the perfect body position to avoid being eaten or attacked. It is called the defence posture. Many frogs will also use defence postures without the use of bright colours. For example, the Painted Frog, Neobatrachus pictus, will lift itself up on all fours and inflate its lungs so that it appears larger. It may also make a loud piercing scream to try scare off the predator.

The idea is to replicate a frog attacked or threatened by a predator and an effective defence posture. You need 2 players. 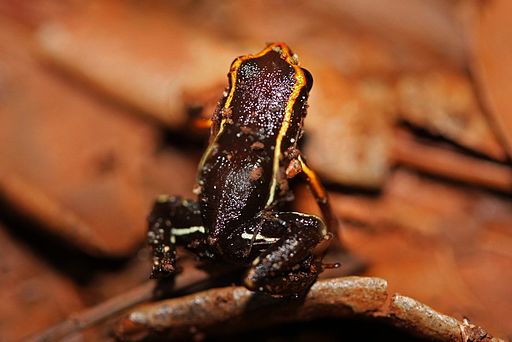 African dwarf frogs are cute frogs that weigh a couple of ounces and live a completely aquatic life. In the wild, they live in regions of sub-Saharan Africa and spend the vast majority of their time underwater. They are very active animals that leap around a lot but occasionally, they will lie completely stretched out at the surface of the water, as if they were dead. This is a completely natural behavior and it even has a name. It’s called “burbling.” Because of their small size, they are popular aquarium pets and you’ll find websites dedicated to them. Not saying you should get one – I believe in wild animals remaining wild. But there are many pet owner forum discussions on “is it normal that my frog stands there, frozen, in the tank?” Yes, burbling is normal and it must be quite relaxing. Let’s try it out.

The idea is to replicate the active behavior of the African dwarf frog before burbling a bit.

I hope that you have enjoyed these easy frog exercise moves for kids. Apart from the frog jump (quite popular and obvious) and the Catch a Bug game (school material), I created all the other moves based on scientific and known frog behavior. In my research, I actually learned a lot about frogs and I hope that your kids will enjoy these activities with their friends. Now if you’ll excuse me, it’s time for my fingers to burble.