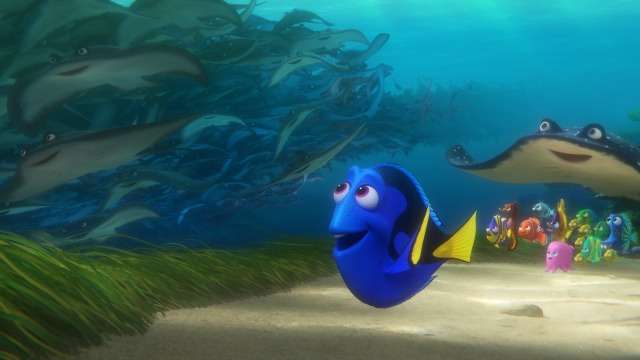 In Pixar’s animated movie “Finding Dory,” a blue tang fish named Dory goes on a quest around the world to find her family. The movie is funny, emotional and sweet, as well as beautifully done. Some images are pure art and the different ocean habitats look amazingly real. What more could a Finding Dory fan ask? This work of fiction with marine creatures as protagonists is also scientifically accurate. It’s accurate down to the sad human trash polluting the ocean, but also in representing marine species on screen and their behaviors. Young marine biologists, meet the real ocean animals in Finding Dory!

I took my two girls, ages 11 and 12, to the Disney family preview of the movie in London, not sure whether they were still the right age for an animated movie. They’re definitely more into dystopia than fairy tales and at home, we rarely watch animated movies anymore except mangas. At the preview, most kids were under 6, but the Finding Dory-themed nail art and face paint activities won my girls’ heart so that was fun.

During the movie, they laughed at jokes and looked (a little) worried in scary scenes, they related with the character’s struggles and cheered in the final scenes. For them, it definitely worked and I’m pretty sure that the ocean conservation message played a part in that. They are both fierce ocean advocates and after the screening, they mimicked the echolocation “superpowers” of the beluga whale and commented on the six-pack rings squeezing a poor turtle in the middle. Finding Dory is a good story for all ages, but it’s also a good story about the ocean.

Now it’s my pleasure to introduce the real heroes of Finding Dory! 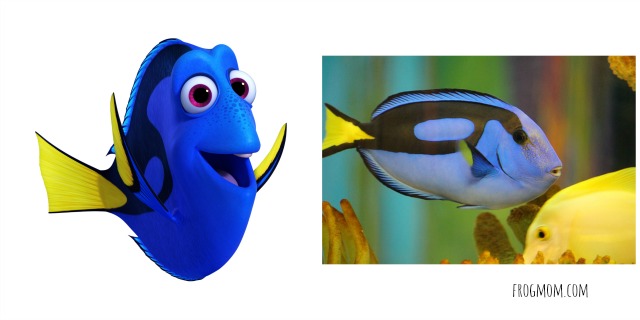 Dory is a Pacific blue tang, a member of the surgeonfish family who lives in coastal waters, coral reefs and inshore rocky or grassy areas. Living in narrow holes and crevices, blue tang’s predators include tuna, bar jacks and tiger grouper. Present in Indo-Pacific waters, wild Pacific blue tangs play an important role in the health of coral reefs as they feed on algae, using their sharp teeth to rip it from rocks and coral. This prevents the algae from overgrowing and suffocating the coral. Pretty cool, huh?

Unlike many other species, Pacific blue tangs are very hard to breed in captivity and a surge in demand from aquarium owners might endanger wild populations, illegally collected with chemicals that stun them. If your kids love Dory, let Dory roam free in the wild and don’t purchase any Pacific blue tangs for your aquarium! 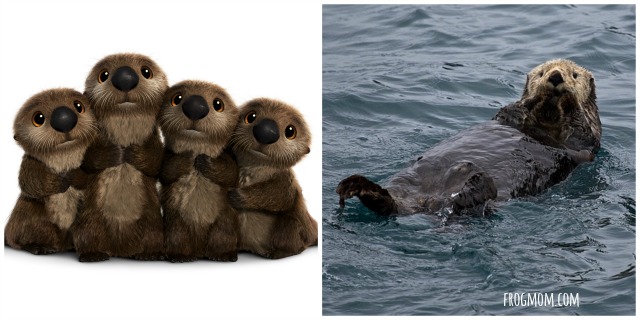 Cute alert! Big-eyed sea otters get one of the greatest moments in the final chase scene of Finding Dory and if you want to know, they are just as cute in real life. A common sight along coast lines in North America and Asia, these brown furry cuties love to get together in nearshore groups called rafts. Rafting groups usually float on their backs in the sea in resting mode (just like in this picture.)

Mother-pup pairs are very important because in sea otter groups, only the female is responsible for the pup. They teach their pups everything about foraging, diving and grooming, as well as being good swimmers. To crack open hard
shellfish (they love abalones, mussels and clams), otters will float on their backs to use both front paws to hit a shell with a rock until it breaks. Smart and cute, what more could you wish for? 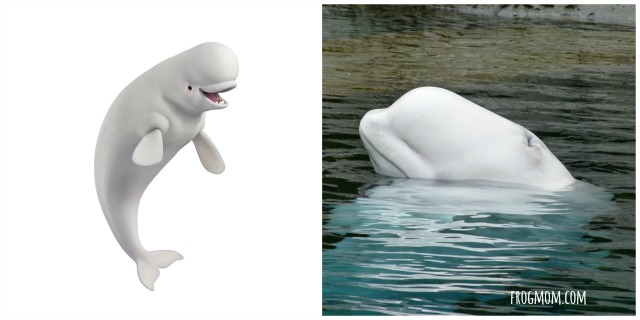 Nicknamed “canaries of the sea” by early whalers because of their squeaking, clicking and whistling, beluga whales have a unique communication system referred to as “echolocation” in Finding Dory. That’s exactly what they do in the wild. Echolocation involves the production of sound and timing of the reception of its echo after rebounding from any solid surface including prey or the seabed.

Bats use echolocation to fly at night and beluga whales use echolocation to swim in deep dark waters that are nearly pitch-black for half of every year. It’s a very unique way of finding out where you are in space by locating obstacles. If you want to know what they really sound like, this is a recording. Imagine early whalers hearing these sounds through the hull of their ships, miles and miles from home. How many different sounds can you hear in the recording? 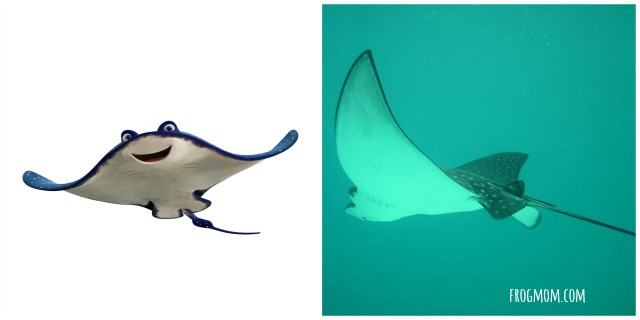 Spotted eagle rays can be found almost anywhere in the world near coral reef habitats in warm tropical waters. In Finding Dory, their graceful mass migration next to the coral reef coincides with a crucial moment in the story, as young Dory is whisked away from her parents in the wake of their swim. In real life, eagle rays do migrate very long distances in flocks of 500 in the winter to warmer waters. In the water, it looks as if they are flying as they move their wings vertically and and when they break the surface of the water, it can look as if two sharks are traveling together. Imagine the fright!

Thanks to their aerodynamic body shape, they are amazingly fast swimmers. Eagle rays feed on mollusks and crustaceans such as clams, shrimp, oysters, octopus, squids, sea urchins as well as bony fishes. To eat them, they crush the shells with their flattened and very strong teeth and then use the papillae in their mouth to separate flesh from shell. Look Ma, no hands! 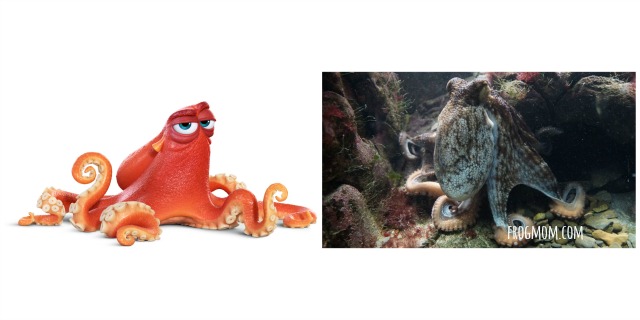 Hank the grumpy octopus (septopus, to be precise) is our favorite character in Finding Dory, an expert at camouflage and prison-breaking despite his cozy-life envies. In real life, octopuses are indeed extremely flexible as they don’t have any backbone–they are invertebrates. With tentacles equipped with suction cups to help them catch food, they are also experts at hiding from predators. They can change their color and texture to blend in with their surroundings in a fraction of a second. Well done, Finding Dory, for showing this so well!

As in the movie, they will also expel ink to distract a predator while they make a quick escape. Generations of kids will now look completely differently at touch pools in aquariums, though they shouldn’t be concerned as octopi are generally not touch pool animals. Hank didn’t mean to end up there! 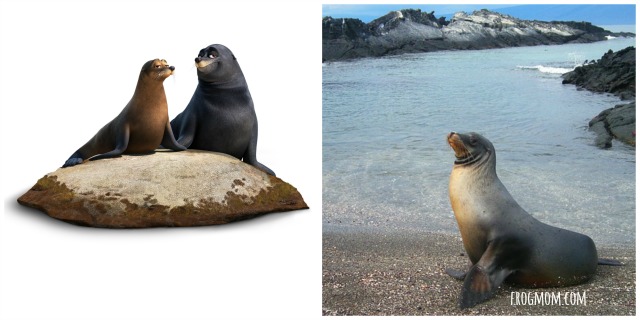 Fluke and Rudder the sea lions are quite the bossy pair in Finding Dory. Bullying their mate Gerald by barking at him, they prevent him from sunbathing on the rock they claim as theirs. While Gerald has become an unlikely internet hero, real life behaviors of sea lions are quite close to what the movie depicts.

Living in the Pacific Ocean, sea lions do get very territorial during mating season and large male sea lions tend to exert their dominance over smaller animals by barking at them. Barking is also a way for male sea lions to woo females into becoming part of their harem. When feeling threatened by humans, they also make a prolonged hoarse grunt sound, which makes them very vocal marine mammals. As you can see, bullying is actually normal behavior for sea lions but you have to understand. In a shark-eat-sea-lion world, it’s no surprise that they would show agressivity to protect themselves and assert their social status. It’s tough world out there and they need to survive. We still root for Gerald, though. 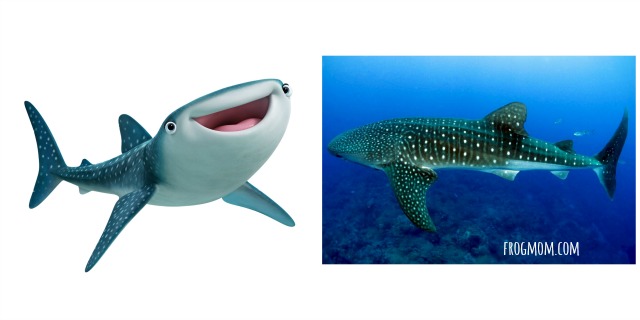 Whale sharks are the largest known living fish and like all sharks, have a skeleton made of cartilage instead of bone. Destiny, Finding Dory‘s whale shark, is kind and eccentric and bonds with Dory as they can both “speak whale.” In the movie, Destiny has very poor eyesight which makes her bump into all corners of her small tank. In the wild, they are one of the types of sharks that are absolutely no threat to humans as they only eat plankton and small fish with their big mouth wide open. Yes, they eat with their mouths open and that’s OK, kids, because they (unlike you) can’t chew.

However, you will be interested to hear about a fascinating adaptation feature that’s quite close to echolocation. Whale sharks have sensors that run the length of their bodies to track pressure changes in the surrounding water. Whale sharks swim with their huge mouths wide open to chow down, making it hard for their proportionately small eyes to see where they’re going. Being able to detect large objects with their pressure sensors gives the shark a “sixth sense” that acts like back-up vision. 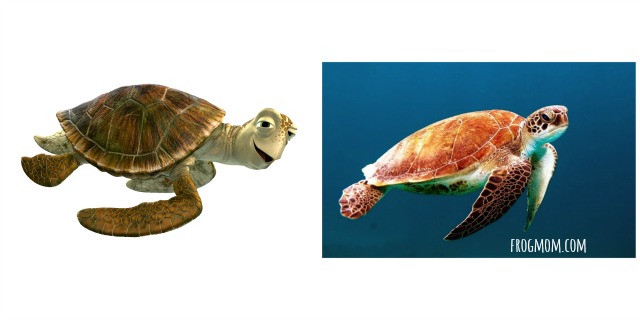 In Finding Nemo, Marlin hitched a ride with migrating sea turtles as they cruised along the East Australian Current. In Finding Dory, Dory gets help from the mellow high-speed sea turtle Crush to zoom across the Pacific on the California Current to find “the jewel of Morro Bay, California.” In the wild, sea turtles are amazing migrators and during non-nesting season, they can migrate hundreds or thousands of miles.

Are they really mellow? Well, they can be terribly cute at a young age, like the delightful Squirt the Turtle. Everybody has seen pictures of baby turtles scurrying along sandy beaches to reach the sea, but do you know how they sleep once in the water? Hatchlings typically sleep floating on the surface, and they usually have their front flippers folded back over the top of their backs. How’s that for very cute?

The one serious note in Finding Dory concerning sea turtles is when a turtle gets stuck in the plastic rings of a six-pack and ends up in the Institute’s quarantine. That, sadly, is very true and if you google Peanut the turtle, you’ll learn about a real-life turtle who grew up deformed with a six-pack ring in her middle. This is a great image that shows the impact of plastic pollution on ocean animals and might help people be more careful about their plastic trash at the beach. 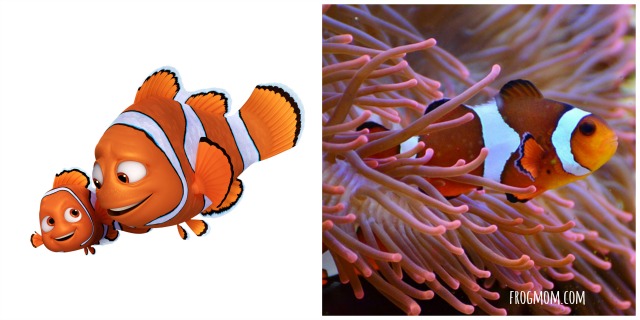 It’s impossible to talk about Finding Dory without Nemo, the clownfish who started it all. As you probably know by now, clownfish live in sea anemones and feed on small things like zooplankton and detritus. With their stingy tentacles, sea anemones protect the clownfish who can zoom in and out of sea anemones without problem as their skin has a protective mucus coating. The scenes when Dory gets repeatedly stung by sea anemones trying to join Nemo and Marlin? Totally true. Poor Dory.

Recently, we were lucky to see wild clownfish with my girls when we went snorkeling in Thailand, which of course had them exclaim, “I found Nemo!” Sadly, not all clownfish are that lucky. They became extremely popular in aquariums after Finding Nemo and their wild populations plummeted. You can learn more about this here and see how you can help clownfish remain wild in coral reefs.

That concludes a brief survey of the main ocean animals in the movie but there are lots of other ocean animals in Finding Dory. Are there other ones you’ve noticed that you want to learn about? Cool behaviors you’d like to mention? Feel free to use the Comments section below and share your feedback.

Thanks Disney for inviting me to the Finding Dory preview! It was a very cool movie and I loved learning how well documented it was as I was researching this story.