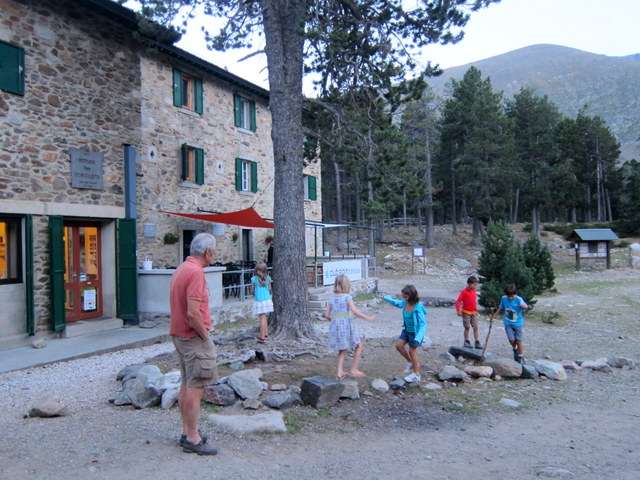 > A 7-Year Old’s First Night in a Mountain Shelter

A 7-Year Old’s First Night in a Mountain Shelter

Today we went up a mountain with the car and we found a house because on the next day we were going to hike the Pic du Canigou. The house was beautiful and inside it was comfy. We got the keys and went upstairs into our room. It was medium size and there were two bunk beds – four beds – inside the room.

There was a view on the mountain through the window. There was also a donkey and few horsies outside. Some of them were brown and one of them was white. There was even one with a little bell on his neck. The donkey was spotted black and white just like a dalmatian.

When we got in the room, we set up how we were going to sleep and we put two adults up and both of the kids down. After everybody got their sleeping bags on the bed and the little kids got their little dolly out, we went down and I took a soda – Orangina – and my sister drank a Coca Cola.

My grandpa had to sleep in a room across from ours and there was a person who was already sleeping in it and he didn’t smell good and he stinked. So my grandpa went to sleep in another place.

When the bell rings, we all went to our table and there was the last name of each reservation written on each table. After, they started to serve dinner. We had soup for starters, lentils and sausage for the main dish.

They gave cheese but I didn’t eat mine. For the dessert they gave brownies with powdered sugar on top – it was good!

After dinner we wet to go play outside with kids that we didn’t know. They were Catalan and we didn’t talk the same language. I understood nothing of what they said but we still skipped rocks together. With my sister we made a little theater out of rocks for fairies.

Then we went inside up to our rooms, we got in our PJs and we went to bed. When we were in our sleeping bags, my dad came to read a story so I could go to sleep and after I read a little bit of the story by myself.

I also made a little house with blankies. I attached them to my daddy’s bed and we could open it if we want to go outside.

We also had the ladder to have communications and after we whispered through the ladder with my sister but when my parents saw that we were whispering and we had to stop and go to bed.