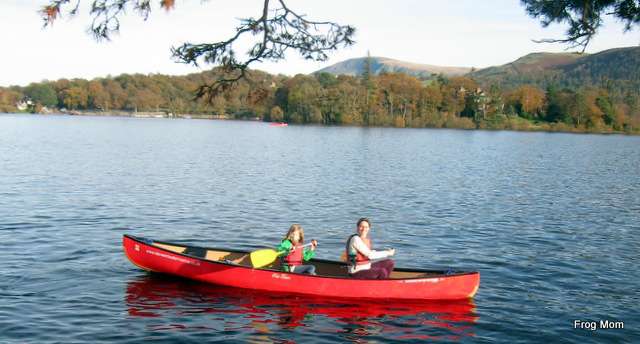 > A Family Canoe Adventure in the Lake District

A Family Canoe Adventure in the Lake District 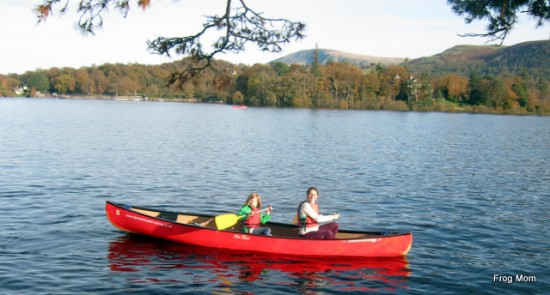 Davy Crockett certainly knew what  he was doing more than us, but he had found the perfect way to explore waterways of the Canadian frontier. Canoes! A family canoe adventure is an ideal (and mildly physical way) to enjoy the colors of the Indian summer on a lake. If you’re looking for a lovely water activity where you navigate with your children and (hopefully) don’t get wet, look no further than canoeing.

On a sunny autumn day, my girls accepted that renting a canoe to go island-hopping in the Lake District in England was a good option to while away the afternoon. Since none of us had canoed before, it would be a fun activity, provided neither of us fell overboard or knocked the others over with a paddle. We had reasonable hopes we’d make it safe, dry and happy. There isn’t a lot of gear involved in canoeing: it’s just a canoe, a paddle and you. How hard could it be?

Well, there’s certainly a learning curve. During the first 10 minutes, we bumped into a variety of floating objects or aquatic plants, whether they be buoys, anchored boats, willow banks or wooden posts. Coordination, for Pete’s sake, it’s all in the coordination! Should we all paddle at the same time? Take turns? We experimented with all sorts of combinations and during the first hour, did this: first my two girls paddled together in the middle and front (bow) seats, then I paddled in the back seat (stern). We also realized that it was more energy-efficient to stick the paddle in the water vertically, while holding the grip with the other handle and gently rotating the paddle around the shaft. Finally, we were moving forward in a sort of zigzaggy direction. 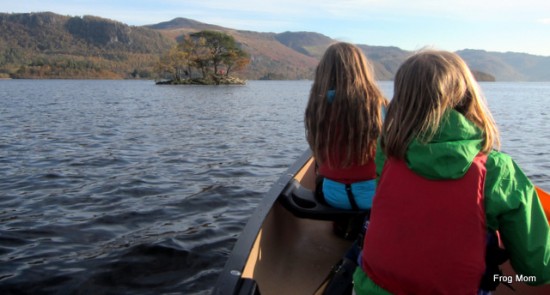 The canoe shop had pointed us to two possible islands that we could reach, depending on our energy levels. The closest one was the tree island, literally an island with a single tree on it. It’s the one on the picture above, as well as the one below later that day. 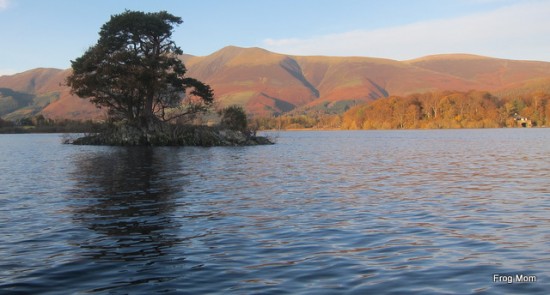 The second island was much further out, in the middle of the lake, about 40 minutes or 1.5 miles away. We decided that we’d reach the tree island first and decide our next move. As you can see, the tree is firmly rooted on the top of the rock island and a few roots have sprouted into separate trunks. Like proper pirates, we decided to make landfall and claim the island our own. Here is y 11-year old, putting to good use her sailing skills learned over the summer. She’s tying a knot to secure the canoe to a tree. 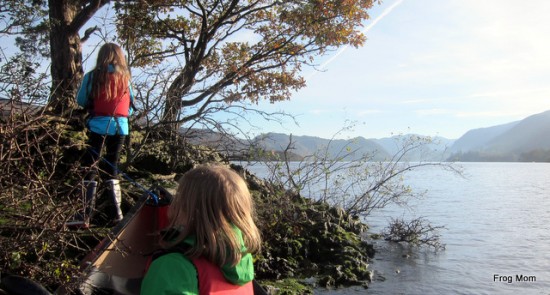 We had so much fun getting on that small island, that I convinced my 9-year old to come with me to circumnavigate the island while my oldest took pictures of us. 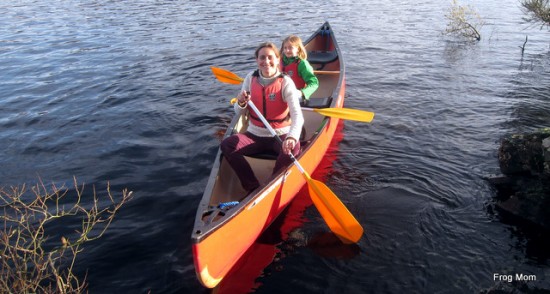 It was so playful—a bit like playing with a toy boat–that we decided to go for the big island. After all, we’d made it thus far and the rental was for 2 hours. In we went! We now got the hang of it but we felt so confident about our newly-learned skills that we started fooling around, cracking jokes. And when my 9-year old laughs hard, she leans forward and sideways. Canoes may be floating vessels but they tip real easily. Please laugh upright, I pleaded with her! It was an exercise in self-control but we managed to reach the other island which, surprisingly, looked as desert as the tree island. There was even a beach to moor the canoe, and tall thin trees that grew roots in the water at the tip. 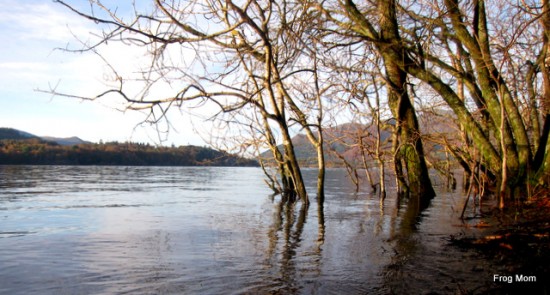 Such a lovely place. We fantasized about camping on the island, thought of all the best spots to pitch a tent, hang a hammock, make a tree swing or run around. Exploring the island was a blast and right when we were reaching the other side of the island, we saw something moving. Initially they looked like smallish wild turkeys but upon closer examination, they were a bunch of grouse! Here’s a couple of them. 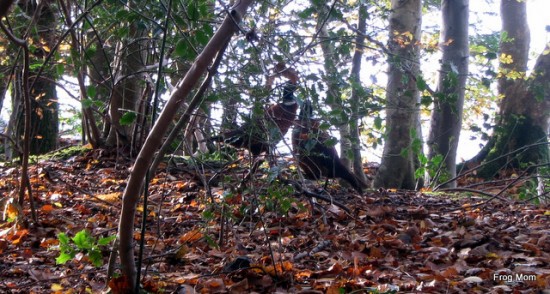 We tried to get closer but they were extremely skittish (can’t blame them) and kept running away in all directions. With my smart phone in hand, my 11-year old went on a wild grouse photo safari and I believe she managed to zoom in and get better shots. This was cool! We didn’t expect any wildlife on such a small island, let alone such big game. At last, we had walked around the entire island and needed to consider our way back. We could have stayed for hours enjoying the lovely Indian summer colors of the trees but it was getting late already. Before leaving, we decided to christen the island Grouse Island, for obvious reasons. 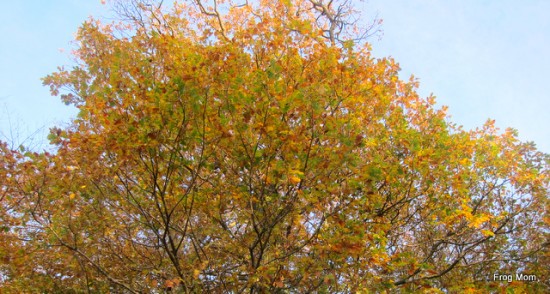 For the return trip, we switched the sitting order around and I found myself in the middle of the canoe with my oldest at the stern and the youngest at the bow. I felt so useless! There’s a reason the strongest paddler has to it at the back. That’s where you get the most results with your paddle! My young one especially enjoyed sitting at the bow and took on the role of captain, yelling orders and steering the canoe in the right direction. 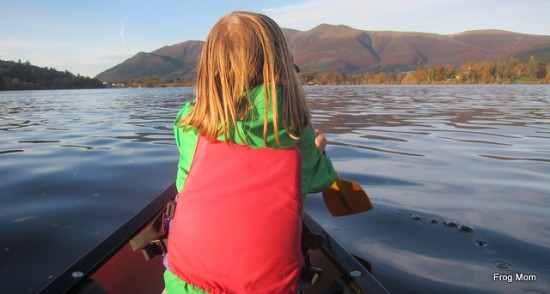 She was having the time of her life and my oldest one was feeling quite important, knowing that she had the most “powerful” sitting position in the canoe. As for me, well, I tried my best to keep up with the captain. We were so much better coordinated on the return, it was unbelievable. By the time we could see the marina, we spotted smoke rising out of chimneys on lakeside rooftops. It was a perfect family adventure with a fairy tale finish. 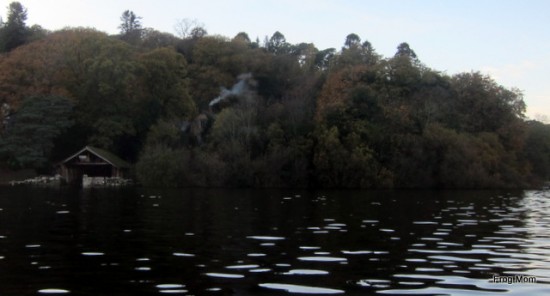 Can you smell the wooden fires in the fireplace? I certainly could. It conjured images of hot tea, cozy chairs and good books. A few minutes later, we navigated smoothly into the marina and docked the canoe without a scratch. 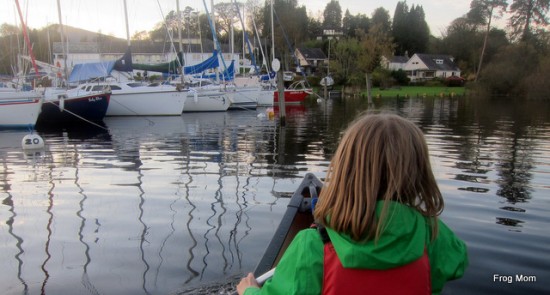 Success! And I should add: dry too!

If ever you can try canoeing with your kids, I strongly recommend it. My girls enjoyed it a lot and they’ve already asked when we were doing it again.