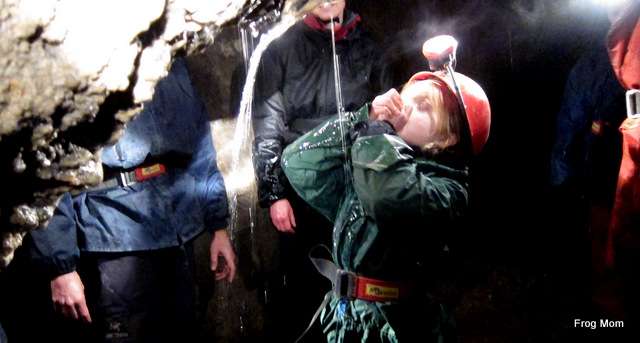 > A First Caving Adventure with Children

A First Caving Adventure with Children

When I polled my girls on how they felt about wearing a helmet with a lamp and squeezing through narrow passages underground, they asked if I was serious. Then they gave me the worried “here we go again, mom’s found a new adventure” look. That was before. A ladder, a shaft and a few chambers and passages later, they were beyond psyched. They insisted I take pictures of them in full caving regalia to show their friends at school – “They’ll never believe we did this!” Followed by, “Mom, when are we doing it again?” That again meant a big thumbs up for our first ever caving adventure, a half-day where my girls had an underground blast doing rock climbing improv, checking out sparkly rocks and leading the way to chambers where water seeped and dripped from minerals. Wild!

Given that our girls are 7 and 9 and caving is mostly an adults-only activity, I needed a guide with the proper equipment for this adventure. Luckily I found out that Explorers Connect was organizing a Peak District weekend with a caving option and that’s how we became part of a small group going down into a medieval lead mine known as Devonshire Caverns.

On a cold and damp morning, our guide Steve explained how he had picked that mine as a perfect terrain for beginners with a few challenges to spice up the trip. He had experience with school trips which was really cool because he was the perfect mix of stay-safe and explore guide for my girls. Gearing up in the fog, we all slipped on a waterproof jacket over our warm layers and rainproof overpants. Then we tightened a belt with a clip for a heavy battery pack around the waist before adjusting the helmet and plugging in a  caving lantern connected to the battery pack. Last but not least, we all donned rain boots. Just like the scene in Ghostbusters, it felt like were all wearing unlicensed nuclear reactors on our backs and I was ready to coolly say, “switch me on!” to my fellow cavers. Only we started with a gentle stroll through the village and up the hill to a clearing in the woods. Far less dramatic, I admit, but the entrance to our adventure was.

“That’s the door?” exclaimed my 9-year old, somewhat surprised by the size of the door. Read: small size. If she was surprised, imagine us adults. How were we going to fit through that hole? Because the entrance to our glorious mine adventure was a little square door at ground level directly opening onto a metallic ladder that led to a small slippery ledge in the dark. Guess I had been expecting a red carpet entrance with gilded chandeliers but a girl’s got to adapt for the sake of adventure. Yes, I told my girls, I was sure about this. It was going to be fun, I promised.

In and down they went, somewhat hesitantly. I followed. Welcome to the mine! As soon as I was in, I switched the settings of my camera to “night” and started taking pics, trying – unsuccessfully – to avoid the constant drip of a few stalactites overhead. Within the first five minutes, my back and butt were already wet, I kept banging my helmet on the ceiling and I cursed myself for not having a real waterproof shockproof case for my camera. However none of that mattered once Steve asked us to switch on our lamps – that’s the “switch me on!” part.

The beam of our lanterns made the walls of the chamber sparkle. Oooh, precious! On closer examination, we were looking at crystallized drapes of calcite, a few calcite “straws” (hollow stalactites) and smudged silvery lines. Around us, softer spots indicated clay in between the layers of limestone. To give us more background, Steve told us about the mining history of Devonshire Cavern. Now the miners’ name for the cavern was Coalpit Rake but although coal was part of the mine’s name, lead was what made it famous. In the village earlier, Steve had showed us a stained glass window whose colorful fused glass plates were held together by a silvery grey line – lead.

The stained glass industry was only one of the many uses of lead in the Middle Ages, others being the printing press and the roofing of buildings. Lead was even used in food and wine – as a sweetening agent – and medicines. Knowing the health dangers involved with lead, I was amazed the mine had been used until the 1850s. Bundled in our clammy vinyl jackets, we were visiting a relic of dark ages when alchemists still dreamed of turning lead into gold. Felt eerie.

To give us a taste of caving, Steve started leading us through the upper level of the mine. Walking single file with our girls in the middle, we walked through a series of tunnels. In that part of the mine, we were mostly able to walk upright and through corridors wide enough for an adult but occasionally, Steve pointed at a few detours where we could play with the idea of scrambling over rocks and squeezing through gaps.

That’s when things clicked with my girls. Scrambling and squeezing was fun! From then on, they were totally proactive in the exploration of the cave and by the time we reached the lower level, they were frankly bypassing the adults to follow in Steve’s footsteps fearlessly. If you ever thought that caving was dangerous for children, you should have seen my girls. It’s like they were in an underground playground, reminding us that being small was great and warning us of potential obstacles even when they were clearly visible. Man, they were in charge!

From a crossing called Five Point Junction, Steve showed us the map of the mine and asked if my girls would lead us to the old shaft entrance of the mine always following the wall to their left. Though it sounds simple enough written like this, it was a bit more challenging in the dark when tunnels led to forks, a few dead ends and dual levels for the same passage. My girls agreed provided they were helped by an adult and a young woman in the group joined forces with them to lead us on.

When we had explored most of the upper level, Steve asked us if we were game for more challenges in the lower workings of the mine. Galvanized by the initial levels, we were more than ready to engage into steeper, deeper and narrower tunnels. The upper level disappeared as a distant roomy memory. We found a chamber where water dripped from a stalactite in a constant stream into a barrel. A natural fountain! We took turns washing our hands and refreshing our face.

Down there, we walked hunched most of the time. At one point, Steve asked us if any of us would like to try crawling between the top of a big boulder and the ceiling of the cave in a space that allowed only crawling with an occasional shoulder twist. Heck yeah! Out of my two girls only my 9-year old felt as strongly. My 7-year old took the regular route. I enthusiastically followed my 9-year old and waited for my 6’2″ husband who crazily decided he was game too – despite his size and claustrophobia. Everybody went through unharmed!

The last experience we did with Steve was simply amazing. In a tunnel high enough for all of us to stand in, he asked us to switch off our lamps. My girls were scared and agreed reluctantly. When all the lamps were out, it was dark like you rarely see dark. Not a light, not a shadow, just pitch dark. Then Steve gave us candles and we lit them up. Had we done the candles directly after the electric lanterns, we would have thought they were useless to give out light. But after a minute in total obscurity, they felt like little warm suns.

Holding the candles – not enough for everybody, roughly 1 for 2 people – we made our way to a circular chamber where Steve told us about the working conditions of the 18th century miners and how candles were their only source of light. Told in hushed tones in the lower parts of the mine with only our flickering shadows dancing on the walls, this story had a profound effect on us. We got it. We felt for the poor men and children who had worked day in day out with a rough patch of mud on the head so they could stick their candle in. What a life. For a fleeting moment we could see them.

Switching the lanterns back on brought us back to our century. More quickly than I thought possible given the maze layout of the mine, Steve took us back to Five Point Junction and the entrance shaft. Thus ended our first caving experience. We were muddy, wet and warm – just like proper cavers!

Thanks to Belinda Kirk from Explorers Connect for organizing the weekend and to my soil scientist dad for correcting what I was writing about minerals and geology based on my vague explanations and a few blurry photographs. If I still managed to mess it up some identifications, well I’m sorry. Over the phone he asked if I’d brought back samples that I could test in my kitchen with sulfuric acid. No I said, that’s vandalism. Typical dad.