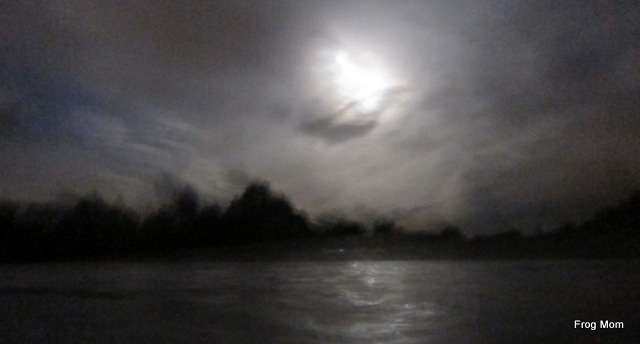 For the outdoors lover, night is the next frontier. Low lights and muffled sounds erase day-time referentials, replacing them with black and white geographies and a world of nocturnal inhabitants. Swimming at night adds yet another degree of mystery as darkness robs you of underwater visibility, a much-needed guide to treading unknown waters even if you lug a Darth Vader glowing rubber duck around your arm. However a full moon on the summer solstice was too symbolic a night to pass on a secret swim invitation. The morning of the summer solstice, I received the details for an 11 pm swim 90 miles from my home. Auspiciously my girls were both at sleepovers and my husband willing to follow this mad adventure. I booked a Zipcar and we left London at 9 pm. Two hours later at the time that usually sees me in bed with a book, I dipped a foot into a lake and felt my way around slippery bottoms.

The night swim was on.

To borrow Dorothy Wordsworth’s words, the full moon was among a company of shady island clouds, and the sky darker about it than the natural water dark. This lonely lake was surrounded by a shadow theater of leafy trees under a Turner sky of patchy clouds floating in front of the supermoon.

Before entering the water I felt chilly in the damp night air and questioned my decision to swim only in a swimsuit. My wiser husband had opted for a wetsuit but confused by too many travels, he had grabbed my old long john wetsuit rather than his spanking new fully-sleeved neoprene thing. Therefore having squeezed himself in a wetsuit too sizes too small by the car, he was eager to get it over with and was already wading in the water.

I braced myself for a cold water shock and was surprised to realize the water was lukewarm. I’m not using the term lightly as a British nights usually come with shivers, but this lake was lukewarm around the edges.

Counting to three I sidled in and joined the small company of swimmers who all sported some sort of glowing thing around their neck or head. How else are you going to know where your fellow water enthusiasts are? I had squeezed two glow sticks along the sides of my swimming goggles. The moon might have been shining bright in the clouds but the bobbing heads of the swimmers were all obscured by the night. Wondering which of these heads I knew, I asked around to find my husband – and found him.

Swimming breaststroke, I stopped at regular intervals to snap pictures with my camera in a waterproof case but they all came out blurry. Even at 3200 ISO, I couldn’t stabilize my hand enough that the resulting photo wouldn’t be all smudged. Part of me was sad but part of me loved the Impressionist look of the shots. Now comfortable with the lake, I followed the others who decided to do something unexpected.

I know, I shouldn’t sound so surprised but I thought full moon swims were just a matter of in and out. Don’t get me wrong, I love that we started swimming. I’d read that lake was used for triathlons so knew it was sizable and as such, we could go on for a long time. Wait, how long? Regardless, I followed the glow lights.

The calming sound of water lapping at my hands as I pushed the water was eerie. Time and again, I turned around to locate other glow sticks in the dark. I did it until we reached the last buoy of the lake, occasionally chatting with fellow swimmers – it’s fun to introduce yourself to a new person in your swim suit.

I couldn’t see the last buoy until I heard other swimmers exclaim “Weeds! Let’s swim around the buoy and come back.” I didn’t fancy spaghetti weeds wrapped around my feet and kept my legs well at the surface. After the buoy I guessed we were in deeper waters and we made our way back to the pale light of the lantern on the pier.

I noticed a swimmer was dragging an unusually large glow stick. “What is it?” I asked. It was a glowing Darth Vader rubber duck that changed colors. I couldn’t help it and tried to get a picture but that Darth Vader duck wouldn’t float still! Very dark side of the Force of him. On we swam.

So far, we’d turned our backs on the moon. Now it was blinding us with its ghastly round face.

Have you ever swum when the glowing of the full moon reflects in the ripples of a lake?

That, was magical. I was so thankful that Bryan, the organizer, had arranged this swim. Not only did we have the lake to ourselves – the ducks must’a been dreaming the night away on shore – but we were incredibly lucky with the weather. Yes the

sky was now looking now curdled milk what with the clouds breaking up in smaller puffs glowing in the moonlight, but the air was dry and the night was still. How unique a feeling to be slowly treading bottomless water with the stars as night lights and no boundaries between solids and liquids.

I felt alive and exhilarated – not nervous as before entering the lake, not apprehensive about the water temperature, and not tired being up past midnight in the wild. Just alive and strangely happy to be fully immersed, sensing more than feeling the world around me. Alive, not drowned.

And this is where I give you the safety talk because night swimming is inherently dangerous and it wouldn’t be responsible to write about it without mentioning a few safety tips. First of all, don’t drink and swim in that order. Look at what happened to Jeff Buckley – he ain’t the only one who thought he could get away with booze and night dips. Swim then drink, that’s up to you. Just make sure you have all your senses to swim in the dark. The experience can be disorienting. Second, know your limits. If you’re feeling panicky in dark water, stay in areas where you can get out without any problems. You’ll feel better. Third and last, don’t swim solo. As Christopher Robin said, it’s more fun to be two. And if you can have a small group, safety in numbers works its magic  even better. For other safety tips on open water swimming in the wild, read the health and safety tips of Wild Swimming. End of safety talk.

As we reached the pier, I felt pangs of regret that we wouldn’t swim any longer but happy nonetheless to be back for a hot cup of mint tea and a dry towel.

Now I wonder – what’s it like to swim in the sea at night?