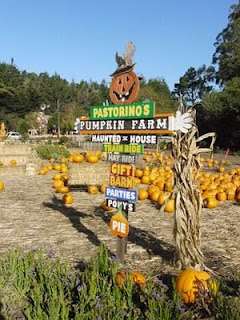 > A perfect October day between Half Moon Bay and Pescadero

A perfect October day between Half Moon Bay and Pescadero 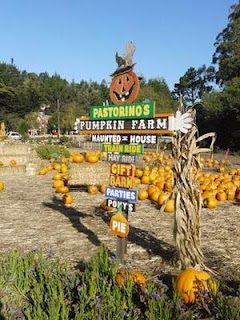 What better place to enjoy a day out in October than Half Moon Bay, the city where pumpkin patches outnumber grocery stores during a whole month? Past the Pumpkin Festival in mid-October, Half Moon Bay’s pumpkin patches still attract crowds but the trafic is slightly better and the pumpkins get cheaper. The big question is, where to go? In past year’s I’ve mostly hovered around Petaluma so I had to rediscover Half Moon Bay. 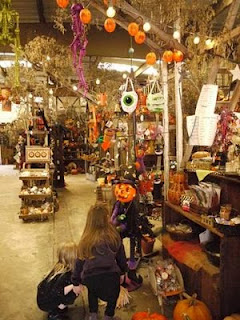 I ruled out Lemo’s for their cheap commercial look and long hesitated between Arata’s and Pastorino’s pumpkin patches. In the end, we picked Pastorino’s because I just love their great country barn. In hindsight, Arata’s and Tunitas Creek Farm would have better choices – more of a country feel. Ah, you can’t have it all. I’ll just return to Arata’s and enjoy their a-maze-ing giant maze – and gladiator games, that weird Arata’s touch. 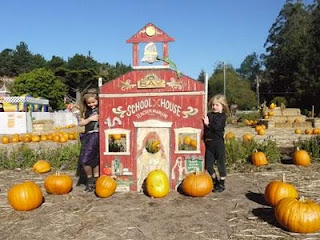 With friends, we showed at Pastorino’s at 10am, right when the farm opened. There was already a birthday party going on and kids running around with colored bands for access to all rides. Indeed, you have to pay with tickets for every single station: the petting zoo, the poney rides, the “bat cave” train, the haunted house, the bouncy house and the bouncy slide (at a whopping $1 per slide!). I bought 20 tickets at $1 a pop knowing that they’d refund whatever I hadn’t used. Ironically, our kids played “Three little pigs” a lot behind the cut-out houses that were super cute – one of the things you don’t need tickets for. The big hits ended up being the bouncy house and the “bat cave” train, a little train pulled by a tractor that looks like a locomotive. It goes through two plant nurseries, the second one of which leads to a slightly spooky room in the dark with a few skeletons and graves. What a thrill for the kids! We couldn’t test the haunted house as it’s only open on weekends. 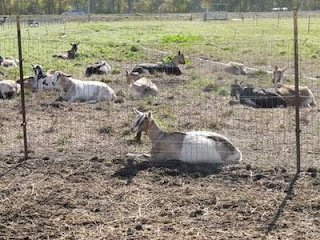 After a couple hours of jumping and running around, we left Pastorino’s for our lunch destination. I wanted to go to Pescadero’s country store to try out their wood-fired pizzas. On the way we stopped at a little stand on Highway 92 that sells honey and honey sticks (blackberry honey and wildflower honey) from Santa Rosa, plus a nice selection of fresh produce. I think it’s Beeson’s but not sure.
Pescadero’s country store ended up being a great lunch spot. The mushroom pizza drizzled with truffle oil and the goat cheese pizza with peppers are so delicious that just writing about them makes me hungry! The back lawn with picnic tables offers a great space for kids to run around. 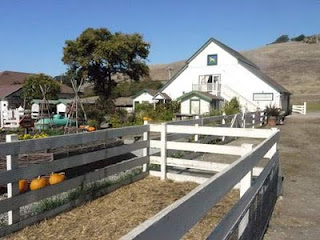 We hopped in the car again to visit Harley Farms Goat Dairy, my favorite goaty farm in the Bay Area. When I go on the weekend, I always get their lavender and honey fresh goat cheese. As soon as you walk past the barn, your nose tells you there’s goats in the air. The smell is strong – and a welcome refresher that animals are not all synthetic and clean like on TV ads. This is a real farm! The kids ran to the goat enclosure and admired the animals. No goat kids were in the kid pen that day – we’ll have to come back in February when the new generation is born. If you have time, adults can tour the farm and taste the cheeses to their heart’s content. 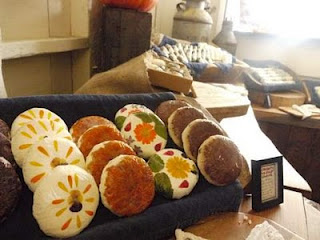 Others can walk inside the white-washed barn and sample all the goat cheeses made that week. On Tuesday the choice included their famous edible flower goat cheese (with edible flowers grown in the garden), cranberry-walnut goat cheeses, herb logs, feta cheese, fresh ricotta, and spicy pumpkin spreads as well as garlic and herbs. They also have a small body/bath products line made with goat milk, most of which smell fantastic. The lavender and rose geranium soap bars, in particular, are heaven, as well as their body milks and creams. Don’t forget to leave with a package of frozen goat milk raviolis if you fancy a quick dinner that night. 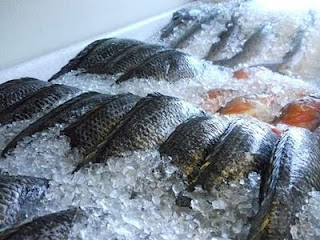 It was “back home” time so we drove back up Highway 1, but this being a food-oriented day, we stopped one last time at the Pillar Point Harbor to get some fresh fish. You can ask at the harbor captainry what the catch of the day is, or head to the fish market and ask what local fishes they have available that day. We opted  for a Vermillion rock cod which was filletted for us and finally got on our way. Can’t wait for November 15, start of the crab season. Last year we walked up to a boat and the guy pulled a cage out of the water and extracted four live crabs for us. The girls loved seeing the “sea to table” aspect. Anyhoo, this was a great day down the coast.