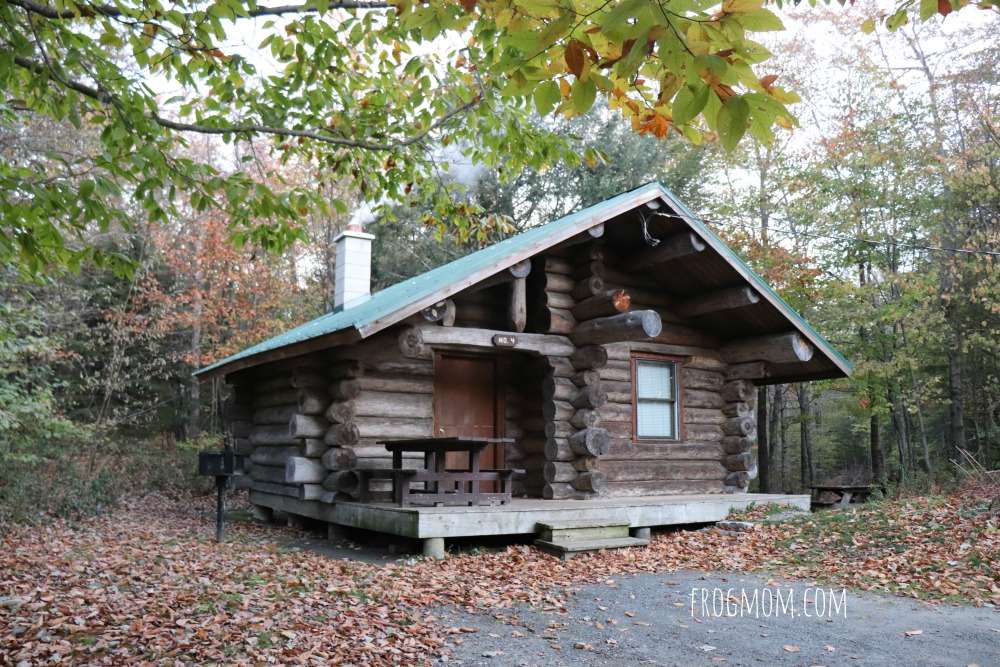 What on earth would you do if a porcupine watched you at night? Ever since A Little House on the Prairie, log cabins have conjured romantic images of simpler living out in nature, the comforts of a crackling fire often obliterating the thought of wild beasts in the woods. Lo and behold, I learned that some state parks rented out rustic log cabins for winter camping in the woods. Perfect for our trip to New England. While some fancy listings mentioned cozy winter getaways, our log cabins had no water, no toilets, and certainly no heating. With winter arriving, what could possibly go wrong?

When I researched our vacation, I narrowed down my results to two state forests in Massachusetts – Mohawk Trail and Savoy Mountain. Both offered rustic log cabins up for rental in beautiful nature surroundings. Both were in the Berkshires, a region renowned for its gorgeous fall foliage.

Alas, there wasn’t much information online about what we would get so I found a few images, shared them with my youngest daughter over breakfast and we picked Savoy Mountain because the cabin looked cuter than the other one. Accommodating 5, it cost $75 per night and featured a table, chairs and two bed platforms. I called ReserveAmerica one evening after work and the deal was done – 2 nights at Savoy Mountain State Forest, cabin 4, Thursday and Friday night.

After a full day driving down from Vermont, we arrived at the campground just before sunset. The ranger station was nowhere in sight, the reception booth was closed, there was absolutely nobody around and this was miles from the closest city deep in the forest.

Let’s just say, something was off. Had I gotten my dates wrong? The lights were on at the entrance, though, so my husband and I looked around, perplexed. What the hell? Then, we found the mailbox and found inside an envelope with my name on it and a key to cabin #4.

So, they were expecting us after all.

Now, firewood? Our cabin featured a wood stove but state parks regulations expressly forbid that you bring wood from the outside. You had to purchase it at the park which we would have done, had there been rangers around to buy the wood from. The many locked doors told us that we would have to wait until the next day, knowing that temps were supposed to dip below freezing levels that night. Chin up, this was a fun adventure.

As we drove through the campsite, we saw that none of the campsites were occupied. Not a single one. Cue Halloween eerie music. Didn’t people winter camp here? And if not, was there a reason we should know about? 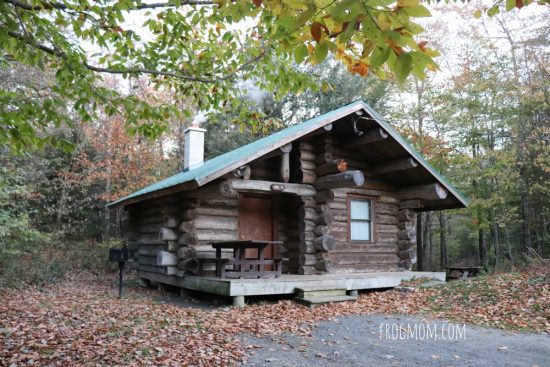 When we reached Cabin #4, the obvious dawned on us – we would be the only living beings in the entire state park that night. Well, apart from bears, moose and other wild beasts, of course. That was a first.

No Toilets – No Water – No Fire Starter 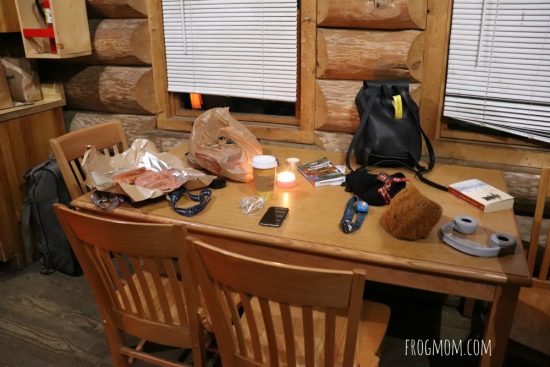 After dropping our bags in the cabin (there was electricity, happy dance!), two of us needed to go to the restrooms and found the main toilet blocks locked with a big padlock.

I sent my girls to fill water bottles to prepare dinner. They returned with empty water bottles. The spigots were closed. Not a single drop of water. The envelope with the key mentioned water access “by the headquarters” so we went out on a tour with the car but where were the headquarters? Nada. What we did see was a pair of eyes shine in our headlamps at moose level. No water. All we had was a liter of water I brought that morning. It’s incredible how thirsty you get when you realize you have very little water with you.

Inside the cabin, we found four bundles of wood stacked by the rangers (what a relief) but without fire starter, starting the fire proved to be difficult. We could see our breath in the cabin, that’s how chilly it was when we arrived, so piled up all our layers before starting the fire. My husband, using his best boy scout skills, used newspapers we had, our camping stove lighter, and blew and blew until smoke started. Smoke turned into more smoke and … the fire alarm went on. 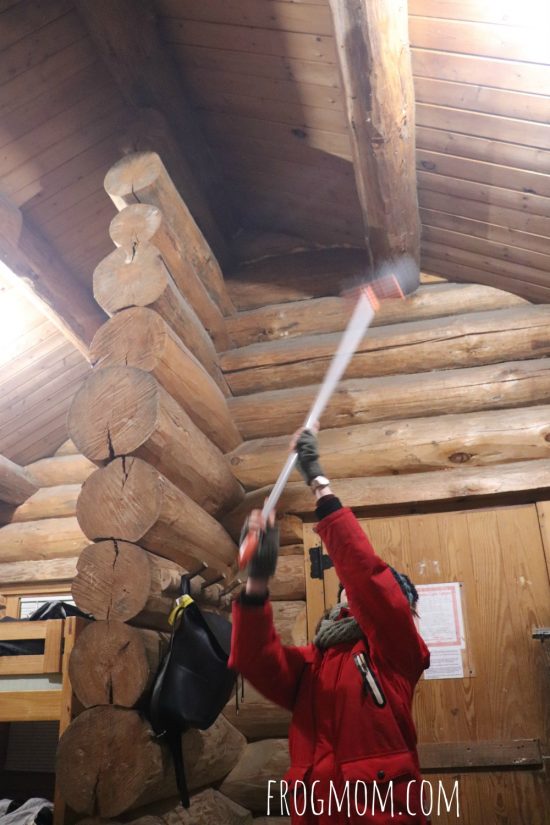 Bless the ranger who equipped the cabin with a broom, a very handy device to ventilate the fire alarm and stop the ear-splitting sound. There were many more episodes of fire alarm going on but at least, we got the fire started. Fire meant food. It was dinner time.

Back at the supermarket, we had planned a nice meal a pasta with mushrooms and cream on the first evening, with sausages and potatoes on the second night. The absence of water made cooking pasta tricky. It also made cleaning cooking pots tricky and what with bears around, who wanted to leave outside a pan smelling of human food? Our only choice was cooking in foil. 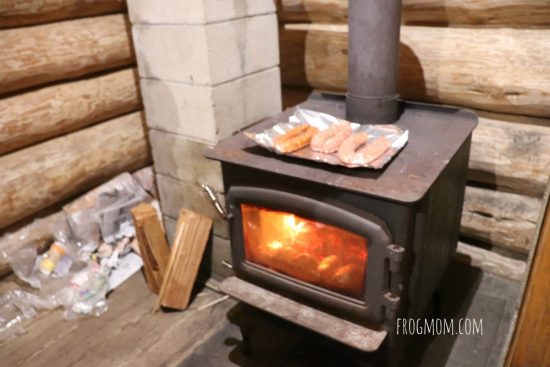 Fortunately, the top of the wood stove was hot enough to cook on so we wrapped the potatoes in foil, stashed them inside the stove, and lined up the sausages on top on foil. Before long, nice cooking smells came from the sausages as well as fat cooking smoke.

The fire alarm went on. We were now quite efficient at broom ventilating + opening the door.

With the fire and dinner underway, my husband went exploring and came back quite excited.

“I’ve found the toilet!” he announced.

There was a composting toilet between cabins #3 and #2. 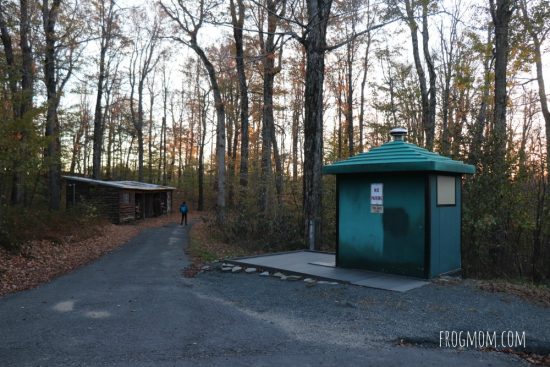 Somehow, we all felt better until he went again before bedtime and announced.

“I saw a pair of eyes looking at me by the toilet. I hissed but the animal wouldn’t budge. It was that high,” showing his knee. 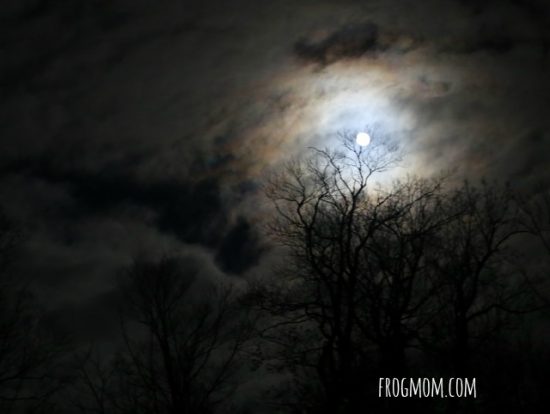 None of us went out for a wee that night.

I was looking forward to a good night’s sleep in the woods, as it was cool enough to enjoy a sleeping bag but warmer in the cabin than upon arrival. We had devised a plan to drive to the next town in the morning for breakfast as water was running low. All the stars were aligned. 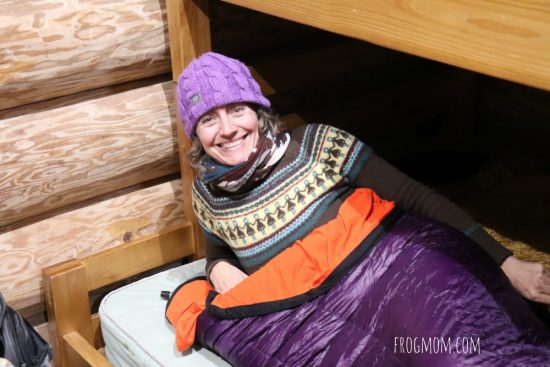 See, I was ready in my woollies, bundled up in my quilt and thermal sleeping sack. All would have gone swimmingly had we not discussed the issue of the fire. I would be the first up the next day and without firestarter, couldn’t start the fire anew. We had to keep it up all night.

“One log only lasts one and a half hours,” observed my husband. We counted the logs. We had more than enough. The question was – who was going to get up and stoke the stove? My girls volunteered, so did we. We all took shifts every 1.5 hours. With some peace of mind, I went to bed before everybody else.

You can never tell when an unusual sound is going to wake you up in the dead of night. Except, I had heard this sound before.

Damnit, we had a resident mouse in the cabin. As I had another two hours before getting up and no chance to catch the greedy thief, I lay awake listening to the tiny teeth brutally attacking something that must have been delicious. It lasted a while.

The next morning, my husband showed me this positive identification of the rodent. 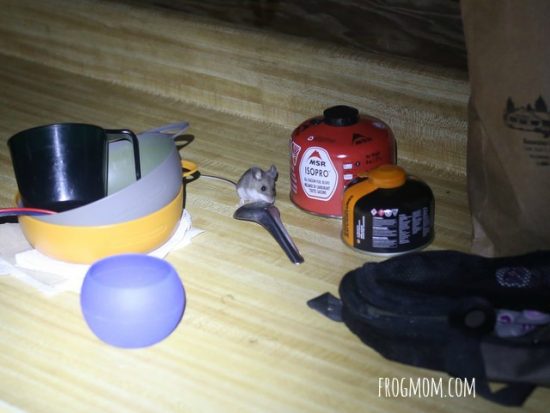 Between a spoon and a bowl, the brazen mouse hadn’t budged. Another bold animal at Savoy Mountain State Forest. We surveyed our belongings. “There’s a hole in my hat!” said my husband, poking a finger through his wool hat. We opened our food cupboards. 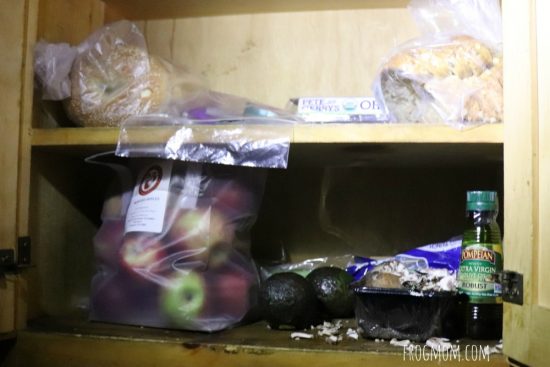 Blimey. Trust a mouse to be messy with its food, it was a rampage scene. The bagels had been slightly attacked but clearly, this one rodent had a sweet tooth for fungi. So long, pasta with mushrooms. We could always do pasta with cream and salt, that would be nutritious. 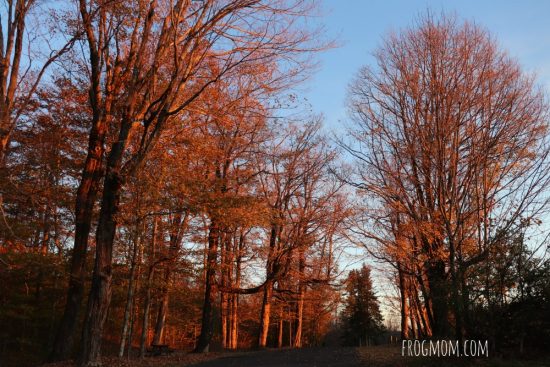 With morning came the most beautiful golden light on surrounding trees. It was serene and the air was crisp, promising fine hikes that day.

How did we learn that a porcupine was watching us at night? 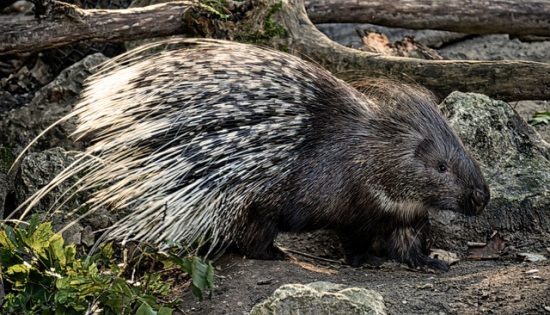 Far from me the idea to bother you with tedious details of our second night in the log cabin but a few things definitely improved.

We found the water spigot. The ranger headquarters were further down the road, only they weren’t lit up at night so we had had no chance to see them when we drove up.

With water, pasta was again on the menu and we stopped at another supermarket to stock up on mushrooms.

We also found out that the rangers knew about the mouse problem. “We had mouse traps in there until you arrived,” the ranger, “But we removed them. It doesn’t look too good.” Indeed, it doesn’t. Maybe a note of warning to log cabin visitors?

We weren’t alone anymore. On the second night, all four cabins had cars in the driveway. It felt like a crowd.

Last but not least. We had firestarter. Yippee! 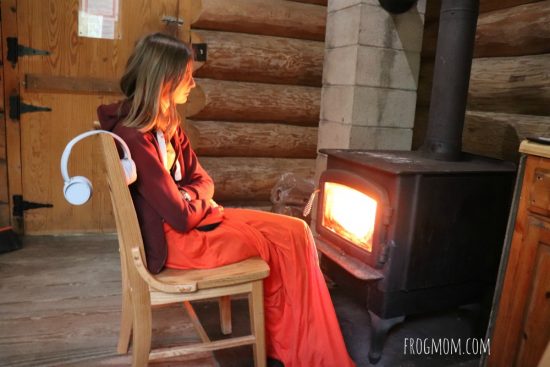 My youngest daughter read Emile Zola’s Germinal on her iPad by the fire. She finished it, depressed. Zola is always depressing. 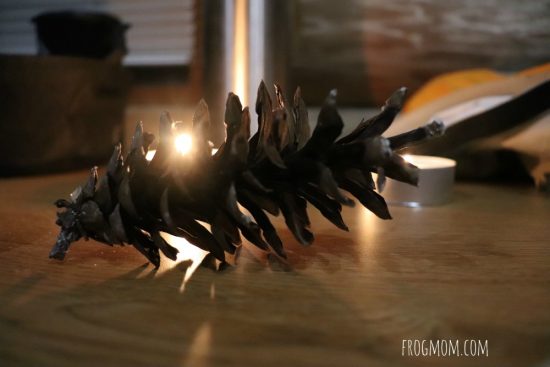 I felt so relaxed that I took this artsy picture of a pinecone with a candle in the background.

We took 2-hour shifts that night. We had become quite good with this woodfire thing. Too good, in fact. We were all sweating all night.

The mouse went on a diet on the second night. Mushrooms were gone anyway but most importantly, we had found the hole carved with its teeth at the top of the right cupboard. We knew it was not able to open cupboards!

We slept quite well and no bears came around that night.

You too can try this wonderful life-affirming log cabin camping adventure! After we tidied up the cabin, I took a few clean pictures of the log cabin because it was really quite cute. 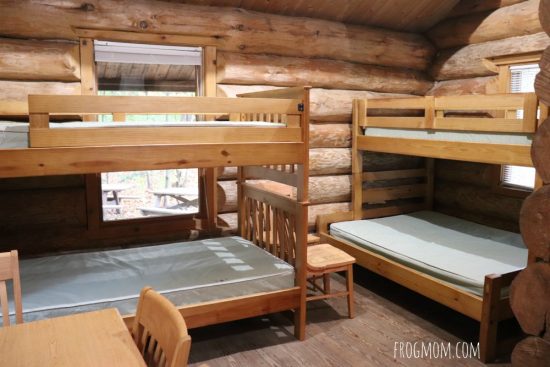 This here is the sleeping quarters – note, space for 5. You’ll have to forgive the noisy plastic mattresses. 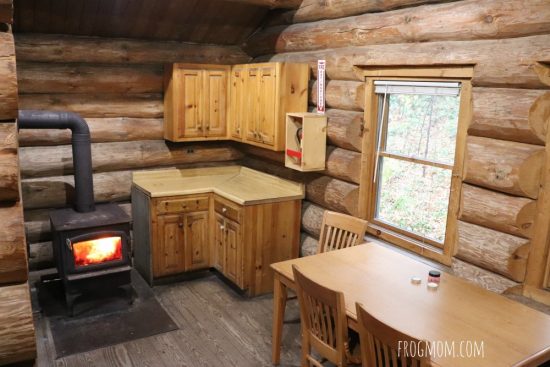 Kitchen and living room, all rolled up in one. Roaring fire for experienced campers. 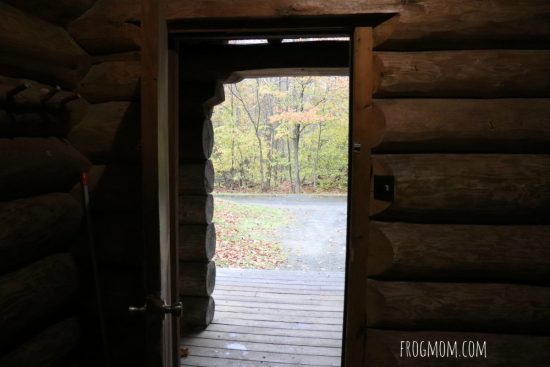 Nature on your doorstep. Literally, the broom will come in handy as you tend to drag a lot of stuff with your boots inside.

You can book your cabins here.

Enjoy your log cabin adventure and by all means, bring firestarter!