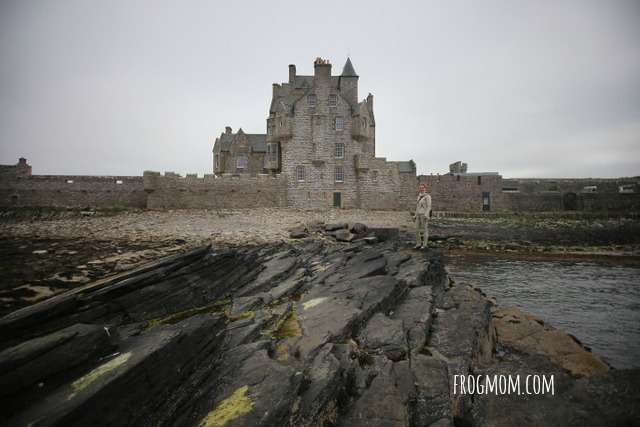 This imposing 15th century tower makes any trip to the remote northeast tip of Scotland worth it. Facing Sinclair Bay on the sea shore, one mile west of the infamous Sinclair stronghold of Girnigoe castle, Ackergill Tower rises tall at the end of a mile-long road. Quintessentially Scottish, the tower has all the usual Scottish features – a resident ghost, tartan rugs, dramatic costal views and a grim history – plus the added bonus of a luxury castle hotel.

When we stayed in June 2018 after a week-long trip to the Outer Hebrides, we were welcomed by a Scottish man in kilt playing bagpipes for a wedding. This is the second Scottish Castle we’ve stayed at, the other one being Gleneagles, and we were looking forward to a relaxing stay and some pampering. On all that, Ackergill Tower delivered.

A Scottish castle hotel review would not be complete without a history section. Isn’t history the very reason I chose this hotel in the first place?

The architecture of the Tower suggests it was built around 1495 and one of its earliest occupants was Helen Gunn, known as the ‘Beauty of Braemore’, who was abducted from her home on her wedding night and kept prisoner in the tower. To escape John Keith, her captor, she leapt from the battlements to her death. A stone marks the spot where she fell. Some claim that you may see her ghost roaming the battlements during your stay, either as a green lady, or as a lady in a long red ball gown with tall black hair.

Family bloodshed ensued in the Battle of the Champions and the whole Gunn family was massacred, which might even resonate of terribly unfair chapters of George R. R. Martin’s Game of Thrones. Red wedding, anyone? Anyhow, there it is. Both Helen and her family were wiped out. Clan Keith conquered.

In 1547, the Sinclairs of nearby Girnigoe led by George Earl of Caithness attacked and seized Ackergill by surprise, taking Alexander Keith and his servant John Skarlet hostage, detaining them at Girnigoe. In 1598, John Keith of Subster attacked the tower with a large army, climbing the barmkin wall with scaling ladders at night and entering the tower by surprise hurting his servants in the process. No such thing as peaceful castle occupation in this part of Scotland. 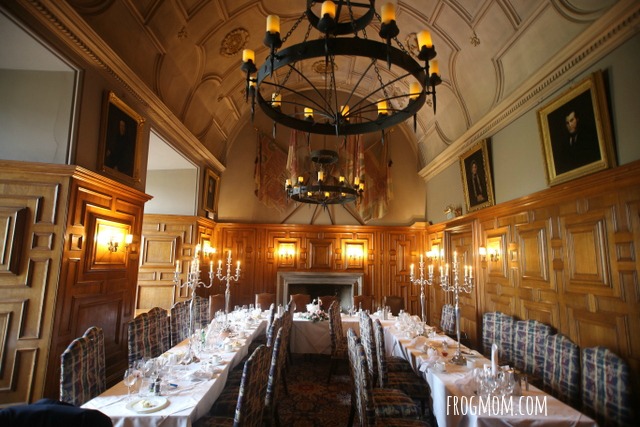 In 1699, the castle was sold to the Dunbars, who added extensions and renovations and it remained more or less within the extended family until it fell in disrepair and was sold in 1986, opening as a luxury hotel in 2012. The tower and surrounding buildings was saw in 2018 had obviously been altered many times, but it was splendid and fearless all the same. Arriving at the end of the afternoon with warm sun light, it was a sight to behold.

While Ackergill Tower is on most travel platforms, they all showed no vacancies for the date we were interested in so I checked the website, picked up the phone and called. Sometimes, the easiest ideas are the best. Yes, they had two bedrooms available on our selected date, a family bedroom for four and another for two. Would we like to book dinner with them? I opted to reserve dinner at the castle, if only because I didn’t fancy driving after dinner. I am the designated family driver and that comes with drinking restrictions. I believe that Ackergill Tower is independently-owned (it’s actually on the market for £3,900,000) which is endearing (it’s a big place and staff is very friendly) but comes with uneven service. I didn’t receive a confirmation email right away so called the following day and it popped in my inbox immediately.

We didn’t stay in the castle per se, which was just as well as there was a wedding that night. The main tower sleeps up to 32 with a mixture of double, twin and single rooms, the beach house, sleeps up to 10 with a mixture of double and twin rooms and 4 bathrooms, the sunshine and seashore cottage sleep up to 4 with 2 double bedroom suites and 2 bathrooms and the smiddy sleeps up to 2 with 1 bedroom and 1 bathroom. Most importantly, the largest treehouse in Europe around a Sycamore tree sleeps 2 (more on that later). 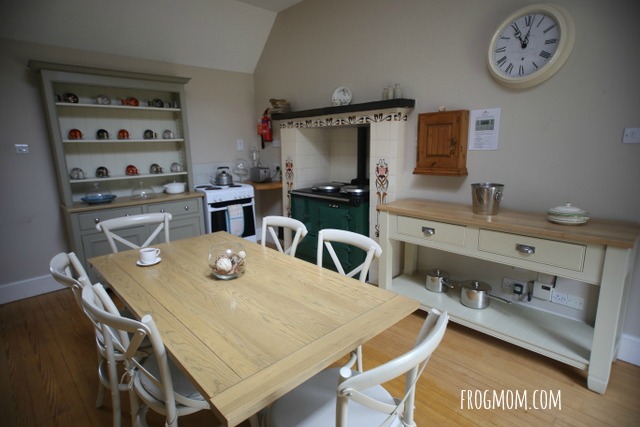 We stayed at the beach house, which was the nicest beach house you could imagine. It would be more fair to describe it as a stately New England-style historic house with wainscotting, beams, paintings, and books. A home away from home is my home belonged in a posh decoration magazine. 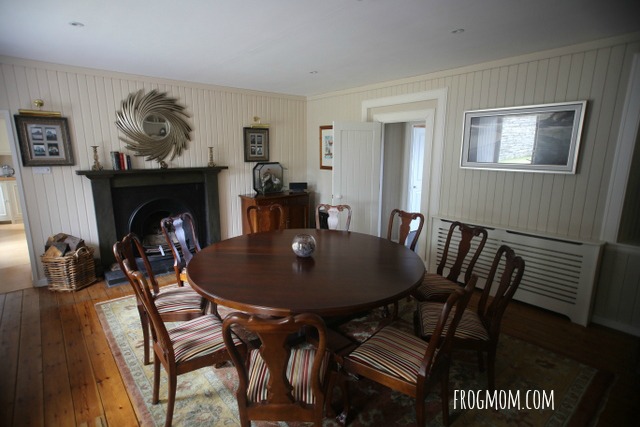 It is complete with a well-appointed kitchen (including a classic Aga cooker), sunroom, library/living room (with books on Scottish ghosts – what else?), formal dining room and four bedrooms. 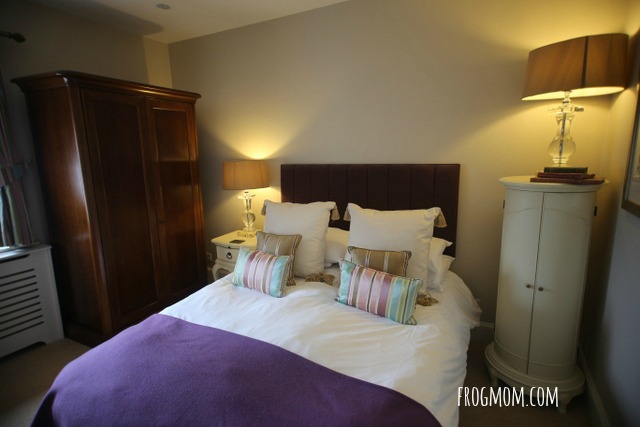 Our bedroom, the family room, had windows on two wides, facing the ocean to the east and the meadows on the west. In the downstairs portion, a king-size bed tucked away in a large alcove, separated from a luxurious sitting area by a curtain. Up a short flight of stairs, a bathroom and up a few more steps, a bedroom with two single beds and a magnificent sea view.

We had pre-dinner drinks and dinner at the tower and breakfast in an adjacent building. In addition to these, we enjoyed tea and biscuits in the conservatory of the house we stayed in, as everything was provided in the kitchen. All we had to do was switch the kettle on and pull cups from cupboards. 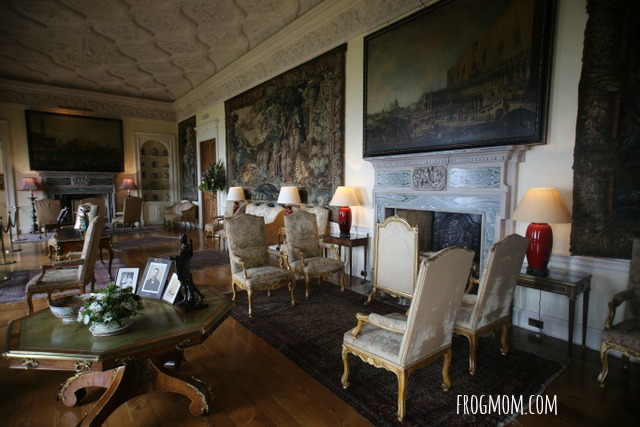 My favorite part was probably pre-dinner drinks as we could order and enjoy them in one of the two lounges upstairs. Grandly decorated, they were arranged with several sitting areas and I imagine this would be quite close to having drinks in your grandmother’s castle (if she had one) before she showed up for dinner. Except there was a wedding party going on in the grand dining hall of the first floor and some guests were retreating to the lounges for some rest and comfy armchairs. We even found a pair of golden stilettos under the table in front of the fireplace.

At 7pm, a butler took us downstairs to a dark dining room for a three-course dinner. Our table had white linen and a candle and service was very good, even if I was taken aback to hear the Czech waiter address me in French. He had overheard us and shared his experiences harvest grapes in the Cognac region. A heavy curtain blocked off one of the windows, facing the garden, which was a shame as more light would have been welcome.

Breakfast took place in a rather uncharming room (former stable?) and was good but not fantastic.

Ackergill Tower is famous for having the largest treehouse in Europe. We walked through the garden to the treehouse and it is indeed enormous, wrapped around a single tree trunk. As the door was unlocked, we tiptoed inside and  walked up  spiral staircase to the one and only room in the round tower – with a circular bed, plush cushions and pillar candles all around. Romantic escape alert! It was quite funny and the rest of the treehouse was very luxurious, with amazing views on a walled garden and ancient trees. 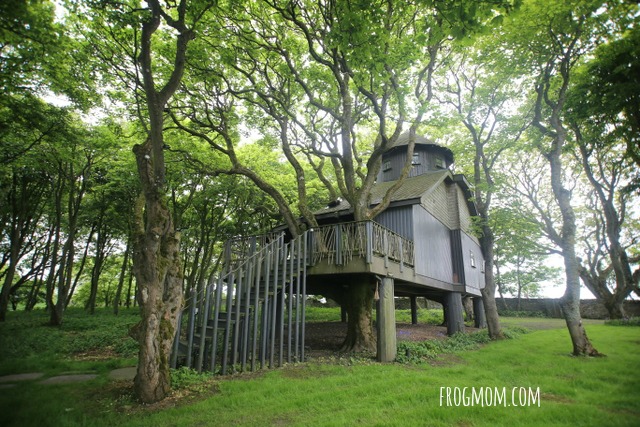 Seaside, we explored the tidepools and rocky shore, wondering if sea otters or seals were going to pop their heads through floating seaweed but no. I’m sure that if you’re patient enough, you get to see marine wildlife right there. Of course, viewed from the sea, Ackergill Tower is very austere and looks a lot more the Scottish fort part than from the garden. You really feel for the poor Helen Gunn flinging herself from the ramparts to her rocky aquatic death. 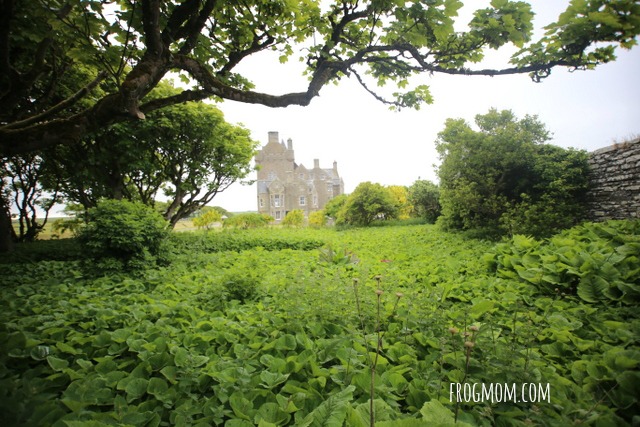 The park had lovely lush gardens with the largest tree mushrooms I’ve ever seen – and in June, late blooming bluebells.

We didn’t have time to scout the surroundings but a coastal path seems to be passing in front of the tower to a local peninsula and beyond.