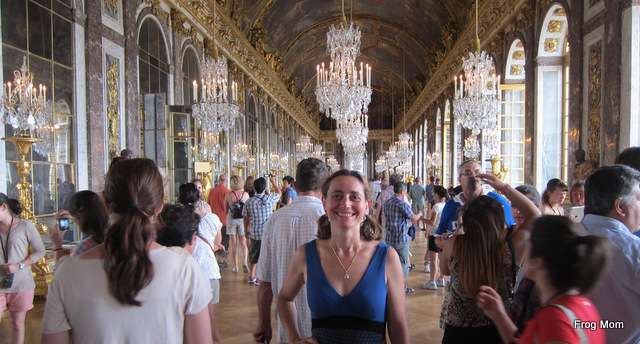 > A Walk Through The Chateau de Versailles – The Unplugged Version

A Walk Through The Chateau de Versailles – The Unplugged Version

The Chateau de Versailles usually rhymes with grand galleries and over-the-top gilded apartments – not a futuristic 18th century clock that will tick until 9999, a bathroom with aquatic pleasures on the walls, a classy mud room for royal hunting dogs or an empty staircase leading to a room with no name. Thanks to a friend who works there, I was able to piggyback on one of his lunch breaks to explore the chateau – quite unofficially but not illegally. It was as unexpected as it was interesting – and I learned lots I didn’t learn at school.

If you’ve ever visited the Chateau de Versailles, you know the lines are long but summertime beats everything in terms of hell and ungodly crowds. It’s a clear invitation to return on a bleak winter morning. When we arrived past noon with my brother, the wait time to buy tickets was an hour and fifteen minutes. Fortunately Pierre is a line-whisperer. “Here are your fast passes,” he said before we went in. Inside, we followed him through the Google Art Project before Pierre turned around and said, “Wait! What I really want to show you first is the Royal Chapel. Over here.”

We returned to a doorway where a small crowd elbowed each other over a red velvet rope to see the narrow nave and vaulted ceiling of the grandiose Baroque interior. Nowadays the access to the chapel is restricted because of how soft the marble floor is. Only Behind the Scenes tours go there. Apparently unofficial walks too. Pierre pulled a Da Vinci Code on the crowds, made his way to the front and opened the passage for us. “Come.” We stepped inside – some people clearly thought we were trespassing – and with authority, Pierre started pointing at details and telling us about the place.

From the sides of the nave, I took a picture of the altar. Check it out in my photo gallery (below) and imagine the future Louis the 16th, then a very shy 15-year old prince, marrying a petrified 14-year-old child-woman Marie-Antoinette, in front of the whole court. Above their bowed heads, a magnificent gilded chandelier illuminating painted ceiling with scenes from the Bible. In the upper tribune, courtesans in corseted waists and clergy in powdered wigs. That evening after the ball, the weather was so bad that fireworks had to be cancelled. Too bad tradition ended the night with a public bedding ceremony. Welcome to your new home, Marie-Antoinette!

Stepping softly on the checkered marble floor, we walked around the altar and imagined the scenes, then came back to the entrance to exit the same way. This time we walked slowly through the Google Art Project as Pierre explained how the exhibits showed the birth of the chateau from a humble hunting pavilion surrounded by swamps to a grandiose chateau with 200,000 trees peppered through landscaped gardens. While I usually find Google cameras intrusive, I love that they sponsored 3D maps and interactive estate strolls for everybody to enjoy.

Past the exhibit rooms, we aimed for the Hall of Mirrors. I feel bad for writing this but we literally rushed through the King’s official rooms, plowing through crowds until we reached a bottleneck. The Hall of Mirrors must be close! Indeed it was, just around the corner and not nearly as crowded as I feared. There Pierre led us to a mirror on the wall and unlocked a door I hadn’t even seen with a click of his employee tag. “Come inside,” he whispered. I felt so much like a secret spy, it was awesome.

We were in the King’s interior apartments, where away from the tumult of the court’s grand apartments the king lived and worked. In the Clock Room, I was immediately attracted by a tall astronomical clock. “It was designed to turn until the year 9999,” proudly said Pierre showing us the place where dates are displayed. It took 20 years to a mathematician to design it and it’s quite amazing. Crowned by a revolving crystal sphere, the clock displays hours, minutes and seconds, it calculates dates taking leap years into account and it shows the exact position of all planets in our solar system as well as phases of the moon and the sun. Apparently there were some doubts as to whether the thousands digit would turn to 2 in the year 2000 but it did, so the clock’s probably going to last until 9999! Could anyone doubt Louis 16th’ interest in clocks and sciences after seeing that? It was the centerpiece of his drawing room.

Right after the clock room, we stepped into a smaller room that looked like an office with two desks. “The big one belonged to Louis 16th,” said Pierre, pointing to a big rolling desk. “That’s where he wrote his letters.” I was stoked that such a piece of furniture, given its symbolism, could have escaped the French revolution. Obviously, somebody wasn’t paying attention. The next room opened on a tiny square room with the king’s royal potty and two doors down a dark hallway, we arrived at Louis 15th’s private bathroom.

Now, the man loved his baths. Throughout his life, he had seven bathrooms built. The room looks today like any other drawing room with wooden floors, a fireplace, chairs and a table. However back in the day, the centerpieces were two big metal bathtubs and the bathing ritual close to a luxury spa. Why two bathtubs? One to get washed by a minion, one to get rinsed, shaved and massaged. Historians write that the “washing” bath was closer to an herbal tea with fresh herbs floating in hot water, donkey milk and whatnot. If anything, the smell must have been pleasant. The woodwork around the room reproduces engravings describing aquatic pleasures in medallions lined with reeds and daffodils. Understand aquatic pleasures as you will but one of my photographs leaves little room to interpretation. To end the bathroom tour on a technical note, Pierre took us up a short flight of stairs to a room that still has the plumbing pipes and tanks where water for the baths was heated. Pretty cool!

Now the best part according to me but you may wonder why. Imagine exploring the galleries and apartments until you push a door into an empty room with no name. Neither so-and-so cabinet nor so-and-so bedchamber. Just a room with three red velvet chairs, three tables and a window overlooking a marble gallery. When a room has no name at the Chateau de Versailles, you know you’re way off the beaten tourist path. Was it a drawing room for guards to play cards above the king’s chambers, perhaps? A cabinet for the king to get away from courtesans and peek at who was coming up the grand staircase? Or a secret room with a hidden door for the king to meet spies? Whatever its use, that room with no name showed me what no Hall of Mirrors could.

There once was a king who lived in a chateau where courtesans fought for a place in one of 288 apartments. Two flights of stairs above the King’s interior apartments was a simple room without gilded mirrors or needlepoint tapestries or clocks. And maybe the king never stepped in this room, and maybe he did, but this chateau was not all grand halls and luxury apartments. It was large enough a labyrinth that some rooms have no name and will never be viewable by the public because – well – they don’t stand out. It’s all a matter of scale, obviously. I wonder how many rooms with no names there are at the Chateau de Versailles.

For that I’ll need to come back because it was the end of Pierre’s lunch break and we came out on the Marble Courtyard. I hope you enjoyed this unofficial – and very partial – walk through the Chateau de Versailles. Some of the rooms I described are viewable via private visits. Check out the website: http://en.chateauversailles.fr/homepage.