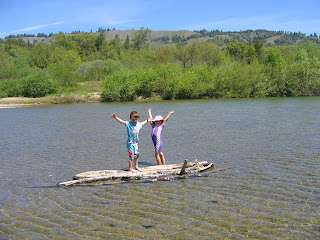 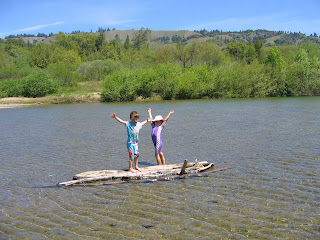 First time in Anderson Valley, glorious time. Despite the many “Closed” signs hanging at restaurants doors suggesting April’s last weekend is “off season”, we enjoyed sunny days in the 70s, a light breeze at the river, chilly nights and no bugs at all.

While camping in one of the four rustic cabins of Hendy Woods State Park, we spent an afternoon wading in the waters of the Navarro River, visited The Philo Apple Farm (a local culinary mecca with a splendid orchard), tasted some wines at Husch and Standish and hiked to two hermit huts in the redwoods and then to Big Hendy Woods, the biggest redwoods grove in Anderson Valley. 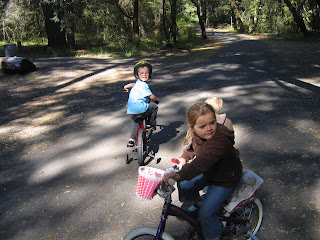 d escape, we were joined by our friends Cath and Danny and their two boys Alex and Evan. Early risers they are these British boys! At daybreak they were probably jumping around the tent while our dreaming lot were stil snoozing in the cabin. However the noise of a bicycle outside drew my oldest one out of her slumber and off she went on her bicycle too.

As we let the childen go wild on their bicycles, Cath and I dutifully packed a picnic lunch. The advantage of visiting off season is that the campground was literally empty (only 25% full) and one of the two loops was closed right next to where we were (Ringtail cabin). This gave the children plenty of space to run around without having to worry about cars. However, Danny found out that off season can also mean “no hot water in showers” and came back shivering from his beauty trip. [The problem was fixed later in the day] 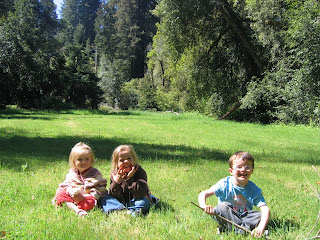 When everybody was up, we took off on foot on Eagle Trail to get to the Day Use area where the Navarro river can easily be accessed. On the way, we crossed a beautiful meadow in bloom surrounded by redwoods.

Just for that, it was worth leaving the car behind. I quickly lined up the kids in the grasses for a picture to capture this rhapsody in green. Alex was holding his walking stick, Iris was picking flowers (a dangerous activity in state parks) and Louise was blinking because of the sun.

The river was quietly gurgling a few hundred feet away. Cool and crystal clear, it revealed mossy pebbles and shallow edges. We set up “camp” by the riverside and once in swimming suit, the children attended their sand play business without paying much attention to us except for basic needs. Cath took a nap, Danny built a moat around an existing sand castle but Iris and Alex crushed it flat so Danny built another castle surrounded by yet another moat. Cedric helped with fortifications, I with sticks, Louise with “trees”. The trick was done.

Except for a few ducks and geese, we didn’t get much visit at all which I found very surprising given our proximity to the parking lot. Summer months must be very crowded and warm but I don’t know if the river will be there in August. It was really not very deep (three feet max?). 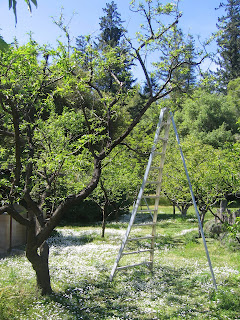 Around 2pm, Cath and Danny decided to stay while we left to visit the area. The Philo Apple Farm was our first stop and a lovely one at that. Hundreds of daisies peppered on the green grass between blooming apple trees, a ladder left standing in the field, baby goats born last week in the goat pen behind the beehives, it was great and very refreshing. The honor payment system of the apple juice stand and its many jams and chutneys testifies of the kind of life lead here. It’s quaint and rural and the glitzy Napa Valley crowds are far away. While they would enjoy the cooking classes, they’d require a four-star spa under the stars with essential oils treatments and organic lavender pillows.

The Philo Apple Farm has a lot more to offer. The manicured gardens, the garlands of white lights between the trees, the gipsy cart on wheels in the orchard all make for a very serene atmosphere that makes you want to breathe as hard as you can. Of course, I haven’t discovered The Philo Apple Farm. Just check out the San Francisco Chronicle, Sunset Magazine or VIA Magazine to see where my inspiration came from.

Next step, the wines. We knew Anderson Valley had a solid reputation for wine so we headed to the Standish winery. I was intrigued by the fact that the tasting room was set up in a former apple dryer. As soon as we stepped in, a woman smiled at us and offered crayons and coloring books to our girls. What a clever idea! They sat at a big wooden table and we sipped our wines without chasing them. I mentioned the Napa crowd earlier because I read that’s what the Anderson Valley inhabitants are afraid of.

However, the owner of the Standish winery was moaning about how much better the valley visitation would be with proper marketing and how the Boonville Hotel didn’t do as well now that they stopped Monday and Tuesday nights for the locals (but it’s lovely inside, we should go and check it out). Indeed, we were the two only ones in the tasting room. Could it be the $22 rose, $36 oaky whites and $40 reds? I found prices steep but that’s happened to me before in unexpected places like Amador County so I should know better. Anyway, four tasting wines later we left with six bottles and continued our way to another winery called Husch.

There, our girls found another activity in the garden as they helped the gardener (a former nanny and mom) water mulch and flowers. The experience was entirely anti-Napa: we tasted 12 wines for free. Some of them were really nice and the prices much more reasonable than Standish (on average $15) so we even became members of their wine club!

Back to the campground, we unwinded a little bit before going out for dinner. Our goal: the Andeson Valley Brewery restaurant. OK, we should have checked before it was open. Remember, off season? An hour later, we came back to the campground for a last-minute barbecue. 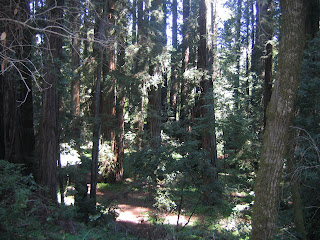 The second day saw us take advantage of the state park’s trails. We equipped the children with walking sticks, packed bottles of water, a fake fishing rod and off we went. Our first stops were for the Hermit Huts of the weird Russian guy who lived 18 years in the wilderness of the woods. Quite fascinating to see how precariously he lived: a hollowed-out burnt log for a roof, a few fallen branches for walls and the bone chilling night temperatures of the redwoods at night. It’s a miracle he survived all that long in the forest.

From the Hermit Huts, we continued along Hermit Hut Trail all 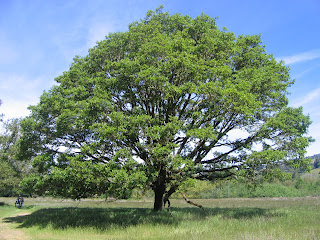 the way to All Access Trail where we ended up deep in the redwoods.

Such majesty is hard to fathom while writing this here at my desk. It was peaceful as if the pine needles covered trails were absorbing sounds around. A little bit further we got to the meadow of the Day Use area and crossed it to get to the upper loop of Big Hendy Grove. We saw the most beautiful oak tree in the meadow.

By then, the children were tired and one by one started breaking down. Fortunately the underbrush was covered in clovers and I explained to my four-year-old that if she found a four-leaf clover, she could make any wish she wanted. She joined her hands, closed her eyes and whispered “I wish with all my heart that the fairy godmother will help me fly.” There, that’s for me telling lies…

As luck would have it, four-leaf clovers are nearly impossible to find and I breathed a sigh of relief when we got back to the campground. Phew, no need to go fairy godmother shopping for now. Instead, we were starving and drove to Boonville to grab a scrumptious pizza (pesto, shitake, goat cheese) at the General Store.

While our return to the Bay Area was uneventful, Cath and Danny’s van broke down around Healdsburg. Despite Danny’s paramedic skills, it passed away without an oily peep. RIP red van.