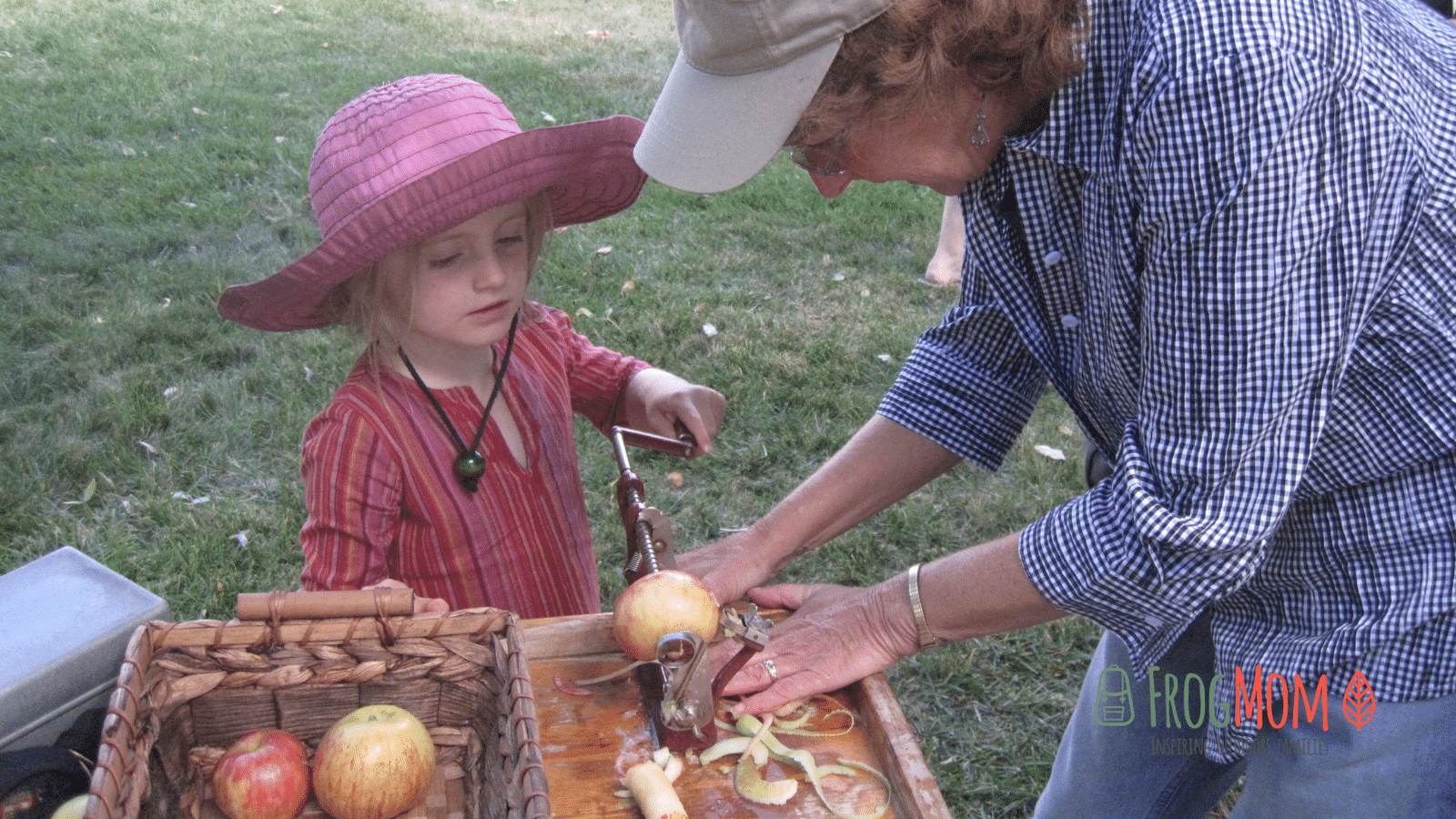 The Strawberry Parfait, Scarlet Surprise and Porter’s Perfection all have one thing in common. These antique apple varieties were popular in the second half of the 19th century and have practically disappeared of the commercial circuit.

In the 2000s, Ranger Amy Wolitzer of Ravenswood Historic Site in Livermore planted more of these antique apple trees in the orchard in front of the house. When you go, look at the tiny trees with the name tag still attached. They will be producing apples in three to four years.

On the last Saturday of August 2010, the real stars of Livermore’s Applefest event were a dozen mature apple trees with fruit-laden branches. As Ranger Amy instructed kids to pluck juicy apples off these trees, none of the youngsters cared that these apples were not the usual Gala or Fuji or that they might have worms inside.

Harvesting and tasting them was only the start of a fun-filled Victorian afternoon and getting first to the trees was the name of the game.

Built in 1891, Ravenswood was a country estate for Christopher A Buckley Sr., a San Francisco politician. In those days, country houses were often surrounded by extensive lands. In Buckley’s case, the land was planted in orchards and vineyards, fitting choices for a Mediterranean climate that allowed palm trees and sycamores to thrive.

Vineyards still grow in front of the house and if you walk to the end of the garden, you’ll see the walls of Buckley’s winery still standing without a roof. In fact, wine may well be the only industry that bridges the gap between Victorian Livermore and Livermore today. Just check out the  Livermore Valley Wineries to get the idea.

Olive orchards would also – but fruit orchards have all but disappeared. Thanks to Ravenswood, families can still experience a flavor of Victorian life – and orchards – in Livermore.

Applefest: What to Expect

The idea behind Applefest is simple: get kids to participate in harvest time at the end of the summer, make them taste rare apples and play old-fashioned games. The amazing part is that the event is free. From my estimates, roughly 80-100 people attended, making it a low key affair with a warm feel, in a small town kind of way.

Ranger Amy kicked off the afternoon in period costume with a few words on antique apples and asked for helpers to carry all the equipment needed to taste apples: apple slicer, cutting board, pail with water (to rinse the apples), cloth (to wipe them dry), stool (to be used as table), and knife (to remove the wormy parts).

Though kids were shy at first, they got bold as more hands were raised than there were helpers positions. Fortunately, Ranger Amy knows how to engage everybody and every child present got to participate at his or her level (which I thought was great). Those who did not have an assigned “helper” commitment got to pick apples off the trees.

The first tree was covered in delicious Pink Pearl apples, a varietal I tasted for the first time in 2008 at the Mendicino county fair in Boonville. It’s a real treat, both tart and sweet with a tangy finish and a crunchy texture fit for the best picnics. It is now my favorite apple and I worship Berkeley Bowl for carrying it in season.

After harvesting apples and tasting 8 or so varieties, we all headed to the front of the house where kids made apple cider (apple juice in the UK) with an old-fashioned wooden press.

What a line to press your own cider! Clearly, video games are so yesterday. Who needs electronics when you can make something with your hands?

Next to the apple press was an apple peeler and corer, a great device that looks like a torture instrument. It clamps onto the table and you skewer the apple on three spikes that hold it firmly in place.

As you turn the wooden handle, it peels the skin and produces a thin ribbon of apple that’s cored and ready to eat. We have one at the Haas-Lilienthal House Museum but it’s broken so I’d never seen one in action. My daughters loved it.

After having tasted or eaten a dozen apples, the kids were ready to burn off energy with Victorian games. Throwing rice sacks through a wooden target got wildly pretty popular, as did the metal hoops and sticks and potato sack races.

However, bobbing for apples was where it was at. I was blown away by a tween girl bobbing apples like a pro. Apparently she had practiced the previous week and had it down to a science, diving head first into the bucket all the way to her neck, pinning the apple to the bottom and biting hard in the flesh to get it out between her teeth. Impressive.

That’s when I noticed a ranger riding a penny farthing (high wheel bicycle). “Is it difficult to ride?” I asked him from far. “It’s a lot easier to get on it than to get off it!” he replied, continuing to circle the orchard. Yup, I can see how it would be tricky to get off that bike. No brakes. It was called a widow-maker – for a good reason.

These bikes were so fast (faster than horses) and popular at the turn of the 20th century that young men got together in bicycle clubs to buy one of those and show off in front of the ladies. They were the venture capitalists of their times!

A few moments later, the ranger invited people to try the bike by themselves, explaining how you need to literally jump on the saddle once your feet are on the lower wheel. Even the kids got to try, with some help.

Before we left, we visited the 1891 cottage where I fell in love with this child-size wheelbarrow in the bedroom. When you go, ask if the docent can play that incredible music box with the side handlebar to wind it up and the perforated metal discs to play the songs. It has a lovely sound.

Though it’s not even September yet, I’m now looking forward to the apple season and also looking for a good illustrated book on Johnny Appleseed so I can tell the story to my girls. Apple Hill festival, I’m ready!

3 thoughts on “Applefest at Ravenswood Historic Site in Livermore”