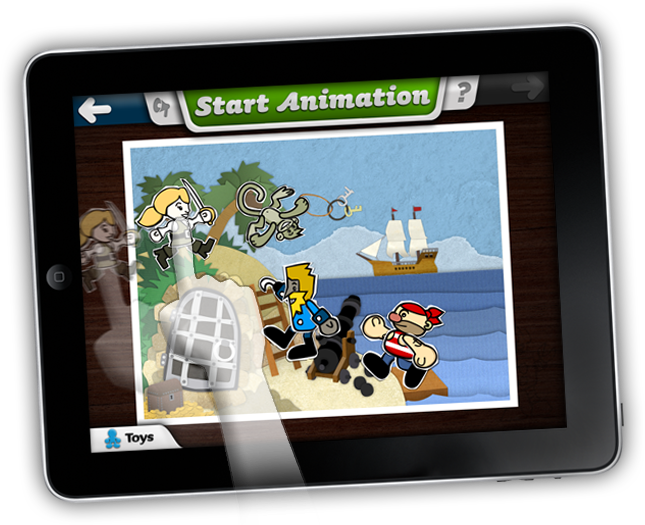 > Apps for Kids: Toontastic and the Golden Monkey Awards

Apps for Kids: Toontastic and the Golden Monkey Awards

For the beginner, animation looks like a pretty complicated deal that includes years of 3-D animation software, art school and tons of patience. But lo and behold, there’s a shortcut for kids! I was contacted by LaunchPad Toys who claimed that they had created “a storytelling and animation tool for the iPad that enables kids to draw, animate, and narrate their own cartoons and then share them with friends and family online.” Really? I had to test this by myself. I mean, my girls had to test it. And two days into it, they can’t get enough of the testing!

One morning I sat down in front of my iPad and set to create my own cartoon. After two hours of hard work, it was a pretty lame attempt at a cartoon but still my own production. I drew my own background, animated with my fingers while watching my girls ski down the slopes of Mt Shasta, read the tutorial to make sure I got it. The result was nothing fascinating but given how technologically-impaired I am, I felt overly proud. It had color, characters, a vague story line and even music.

The same afternoon, I offered to my girls that they give it a try. I just let them loose on the iPad, expecting them to come back for help minutes later. After half an hour, they came back with a completed cartoon, apologizing that during the first two frames they hadn’t realized they could record the narrative. What, you can record your own voice? OK, Toontastic, now I know this is an app for kids. And here is what I like about  it as a mom:

And the winner is…!  If your kids want to vote for their favorite cartoon, they can visit the page the Golden Monkey Awards page and vote in the following categories:

All right so I’ve just spent a whole page talking about an iPad app but don’t forget that kids need to go outside too. Apps are great but they don’t replace an afternoon in the woods. Agreed?