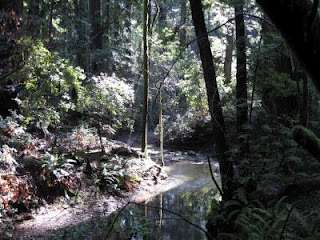 Redwoods and red wine. What could be more representative of the Golden State? I wonder.

This week, my friend Anne is visiting from France with her two children. It is her first visit to 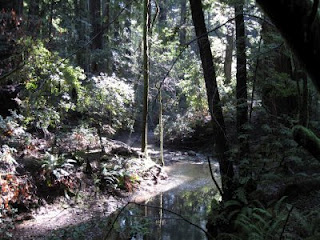 California and she is staying seven days.

In just about a week, what could anybody see around San Francisco that would show them the heart and soul of the area? A drive on 101 south towards Googleplex didn’t cut it as family-friendly. Since I didn’t have many free days to drive them around, I set my mind on the Russian River and Sonoma.

Sure, there are many places to ponder on the meaning of eternity at the foot of redwoods as tall as football fields in the Bay Area. Muir Woods NM, Big Basin Redwoods SP, Portola Redwoods SP are just a few of them. But there aren’t that many places where you can also go wine tasting in a heartbeat. Sonoma and the Russian River combine the best of both worlds.

I have a weakness for Armstrong Redwoods State Natural Reserve, perhaps because it is low on the radar of many redwoods seekers.

In 2008, it was almost condemned as Governor Arnold Schwarzenegger put it on the list of 48 state parks to close as part of a deficit reducing measure. Yet it is a lovely grove of majestic trees along one of the hottest wine regions of California, making it de facto endangered prime real estate. I was glad the measure didn’t pass.

Last week, Armstrong Redwoods lived up to my souvenirs: stately, quiet, primeval and … cool. Cool, in the sense that I did not expect temperatures to be quite that 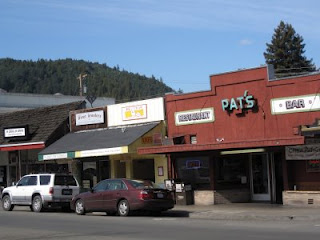 As we proceeded up Pioneer Trail with a treasure hunt map in hand, I kept wondering why I forgot that coastal valleys and redwood undergrowth can be so fresh.

Fortunately, our four children did not complain too much. They were simply thrilled to find the Icicle Tree, the Troll Tree, the Peppermint Patty Tree or the Dinosaur Tree (not to mention the Armstrong Tree of course). It’s not everyday you look up at a tree 310 feet high, as tall as a football field or the tallest roller-coaster of the world.

After our hike, the littlest ones were seriously hungry and so were we. Nearby Guerneville offers lots of good dining options but I wanted to offer my visitors the all-American experience. Bob’N Boy Burgers on Main Street did it for us. The French kids were overjoyed at the thought that they would have fries AND ketchup on the same plate 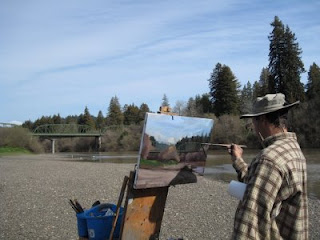 ; mine thought likewise. And the guy behind the counter gave us six lollipops to share in a paper bag. Honestly, it was just what we needed.

After that, I wanted to check out the sign that said “Beach” in the middle of Main Street. We followed the sign down to the riverbanks and found another sign, much less inviting: “Johnsons Beach. Closed November through May.” Of course when it’s mid-February, you’re smack dab in the come-back-later season.

As we saw two groups of people beyond the sign, we nevertheless trespassed. Besides a group of guys drinking in the tall grasses, there was a man painting a figurative lanscape in front of the 1922 Guerneville Bridge. His name was Claude and he had fled San Francisco six years prior to live quietly in a town a few miles from there. “It’s so quiet here,” he said, “I love it.” Indeed in 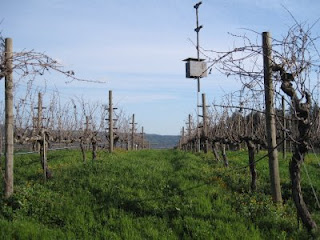 February, quiet it was. I looked at my watch and realized that we must get going as I wanted to catch the last tour at the Benziger Family Winery at 3.30 pm. From Guerneville to Glen Ellen in Sonoma, it took us roughly an hour (getting slightly lost and all) before we parked at the Benziger Winery on Highway 12.

The reason I had settled on that one was the family-friendly factor, as well as nice landscaping. They had a playground and tractor/tram tours of the facilities.

What about the wine, does it count for nothing? Truth be told, I did remember having seen the name of Benziger in several places but could not associate it with a particular taste. The website, however, advertised biodynamic methods and that did grab my attention.

We arrived just in time to hop on the last tram tour. At the top of the hill, I noticed a wooden box and mistook it for a beehive. “We get the question a lot but there is no beehive around here. It’ 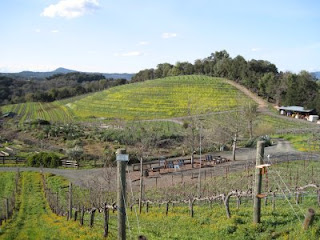 s for the predatory birds to rest before they catch gophers,” explained the tour guide.

Of course. If you use no pesticides, you better attract some serious gopher murderers to keep your neat vines looking pretty. Benziger Winery also has an herb and vegetable garden, as well as pastures for sheep and cows (further though, couldn’t hear moo or baa where we stood).

Again, the idea is to create a biodiversity beneficial to farming the vineyards, to attract pirate beetles and other beneficial insects to get rid of your harmful bugs. Think of it as naturopathic medicine to get rid of a bad cold. It’s a lot more work than the chemicals.

So we listened to explanations on biodynamic farming practices, stopped by the lavender bushes, envisioned gardens of beans attractin 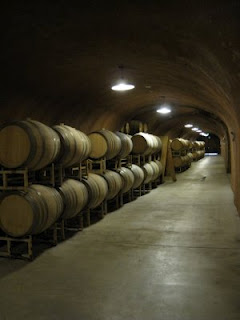 g good bugs and were told rains drained nicely through the volcanic soil.

Poor Jack London would have loved this, as a farmer neighbor on his Valley of the Moon Ranch. As humble Sonoma suckers outnumbered by delicious children, we just followed the tour, trying to get said delicious-turned-rambunctious children to stop kicking the seat ahead of them or talking louder than the tour guide.

At last we entered the cellars, long dimly-lit tunnels underneath the mountain with 4,000 barrels of red wine and slightly less of white wine. At least that got the young generation to tone down their energy. Tunnels are always impressive, particularly if you can glimpse parallel tunnels at the end of long rows of oak barrels.

There, we were shown the Aroma Wheel, as in the different flavors you can obtain from a wine barrel by smoking or treating it different ways. My friend who is a French wine lover was pretty surprised by the process. In her mind, barrels meant aged first- or second-hand barrels.

The children opened big round eyes as I told them that all the barrels surrounding us were full of red wine. By the smell, it would have been an easy guess. Having grown up around wine cellars in the Languedoc Roussillon, I love the smell of a wine-permeated cellar.

Next came the wine tasting. To be perfectly honest, I was not thrown off my chair by the wines we tasted and 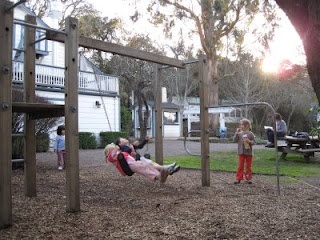 thought the servings could have been generous. But this is Sonoma, the weather is nice and the scenery is gorgeous so don’t go asking for the moon. It’s not the binge-drinking after-work evening at your local pub.

The last item on our list was a visit of the playground, a treat we had waved at the kids all afternoon long. I guess at 5 pm right before heading back to the city, we couldn’t hold them any longer without the playground promise turned reality. As they took turns on the tire swings or looked at the two lazy peacocks in their cage, Anne and I sat on a picnic table enjoying the remains of the day.

I like Sonoma. Too bad we got lost on the way back. Poor signage, not our fault.