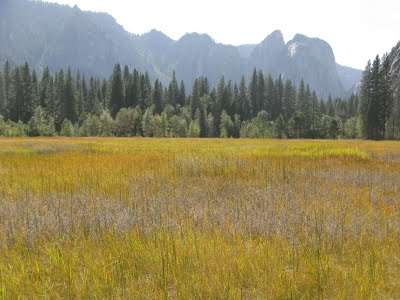 > Autumn in the Yosemite Valley

Autumn in the Yosemite Valley 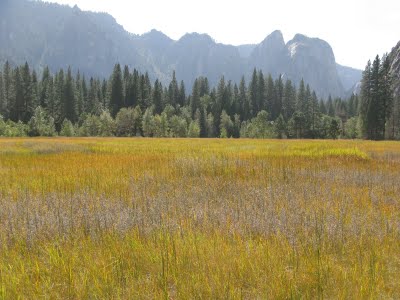 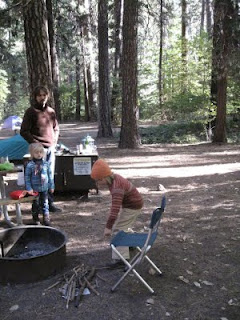 mpgrounds have wrapped up and snow storms close off roads. For the weekend visitor, that leaves the Wawona area and mostly, the Yosemite Valley: 1% of the park area, 95% of tourism trafic, unparallelled awesomeness throughout. Fortunately, autumn days allow visitors to enjoy crowd-free trails and exquisite fall colors that are just unbelievable.

Last weekend, we camped in the valley at North Pines next to the stables with our two girls and two climber friends- Christine, my swimming partner and her husband. In less than 48 hours, we experienced the very last of a beautiful summer day and a bone-chilling wet winter day, compliments of a snowstorm up in the high country. The best part? We planned nothing.

Rather than the usual rabbit race – drive to trailhead, park, hike, drive back – we decided to take it easy and leave on foot from the campground with no itinerary mapped out. As dumb and simple as it sounds, it was sort of a novel idea for us. It was great too!

After a non-memorable oatmeal breakfast on Saturday morning, we put on our walking shoes, packed a picnic lunch and left the camp site. 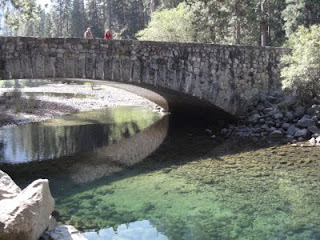 From the North Pines campground, a marked dirt trail meanders along the Merced River as the river’s waters go down the valley. We started there and followed the path. Shortly after we hit a bridge, my girls were startled by how clear the water was. It was clear and a fascinating jade green color too. We inched closer, looked down and spotted a small grey fish, a rainbow trout perhaps. As we admired it angle its way on the rocky bottom, we forgot about time and the next thing you know we were 20 minutes later. At that point, we could have just sat there al 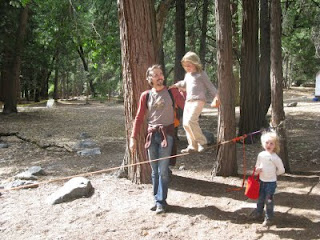 l day but since we were in the valley, we wanted to go see the meadows past the Yosemite Falls.

Up on our feet we got and a few hundred yards further, we heard what sounded like violin music. Or was it guitar? Then right there was a cute cottage with a stylized feather pattern above the door. We were actually in the gardens at the Ahwanee Hotel, listening to an elegant concert on the lawn for a wedding celebration. Guests in their Sunday best were buzzing around a few tables or arriving on foot from the rustic cottages.

I quickly folded in my messenger bag the little plastic pouch 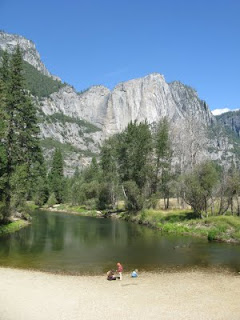 we’d been filling with trash found along the path and walked through the beautiful building.

From the Ahwanee, it’s a short hop to the Yosemite Village and another hop (on a shuttle bus) to Camp 4. Camp 4 is an iconic rock climber’s campground, the place where El Capitan climbers congregate before their big adventure, alongside other granite enthusiasts and tightrope walkers. I’ve never seen so many tents huddled together in each other’s backyard and yet, I envy the wonderful evenings these people must have, retelling their climbs of the day or planning the next. But I digress.

From Camp 4, we crossed the road and headed for the river, barely two minutes away. We searched for an isolated lunch spot in the shade with pretty views and oddly enough, settled for the river banks below the Swinging Bridge. Clearly we were not alone (it’s a major path way for tourists or bike riders), but our girls had a whale of a time di 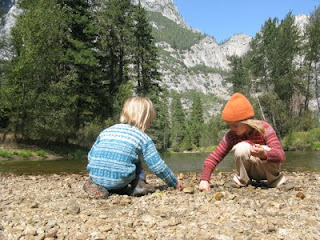 gging fool’s gold with spoons on the beach and making mud pies for fictional piglets.

It’s funny to write “the beach” when in fact that’s the bed of the river, a seasonal beach usually under water after the spring snowmelt. Before the afternoon flew past us, we left the river banks and headed towards El Capitan in the meadow.

Without a proper trail, we entered the tall swaying grasses. Most of the grasses came up to our waist and we criss-crossed our way in the meadows. Our girls loved being “hidden” in the landscape and from time to time they would raise their hands and shout “I’m here!” to let us know that we were no 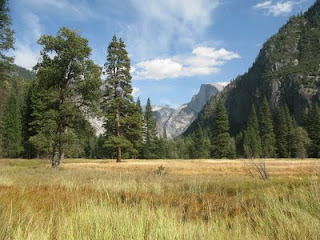 t lost. The yellow grass sea eventually became so thick that we made for the trees where we knew grasses can’t grow because competition with pine needles is fierce. It seemed to us that we had strolled for hours on end when in reality we must have ventured there only half an hour. Looking at our watch, we realized it was time to turn back if we wanted to see the Yosemite Falls and visit the Yosemite Indian Museum before it closed.

Finding the trail under the trees, we followed it back to the Yosemite Falls, taking a few minutes to stop below granite cliffs where newbies tackled sla 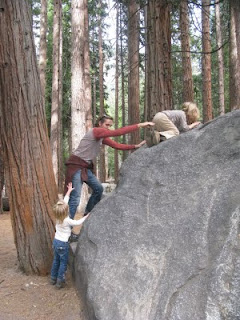 bs, cracks and overhangs, led by guides from the Yosemite Mountaineering School. It was a very entertaining watch for our girls.

Next, we finally made it to the falls but of course, the falls weren’t there! The summer has been dry and all you can admire is the dry bleached wall that is usually washed by the waters of the Yosemite Creek. To fully enjoy the moment, we sat around a big boulder and played around -climbing, sliding down its side, ordinary stuff that people do when they’re next to a big boulder.

Last stop before the campground: the Yosemite Indian Museum. Lodged next to the Visitor Center, it consists of a small indoor museum dedicated to the Ahwaneechee and other California Indians, and an outside area where a Miwok village has been reconstructed after 19th century photographs. That place is a riot! Ok, a quiet riot. Inside the museum, a man in his 30s was deftly carving out an arrow head with a copper tool. Behind him was a reconstructed Miwok lodging and next to it, an invitation to play Miwok games. We had a ba 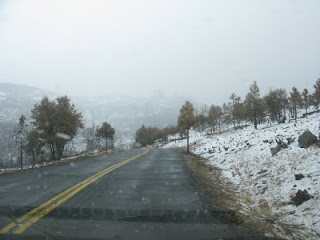 ll playing the stick version of the Miwok dice game, releasing acorn halves on a table to gather sticks from your opponent. Try it, it’s fun.

The outdoor village, though nice, is a bit dusty and could use a few interactive exhibits to bring to life a lifestyle that has mostly disappeared.

That was our day in the Yosemite and we were glad we did that on Saturday because on Sunday, the snow storm hit. Word of advice: always pack for iffy weather in the Yosemite Valley. Between sunny high 70s and 33 degrees with a chance of snowballs, there can be less than 24 hours.

4 thoughts on “Autumn in the Yosemite Valley”