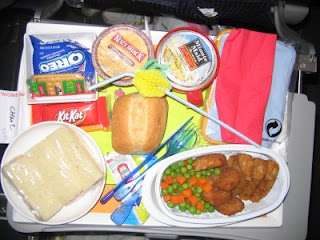 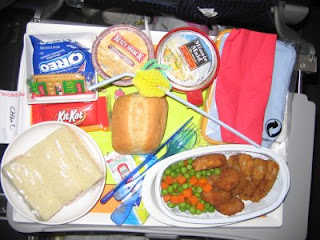 Why did my five-year old decide to pinch my three-year-old at the seventh hour, right after junior had finally fallen asleep after fighting it (and me) for so long? Dunno. However, the result largely cancelled the zzzz factor and minutes later, I was getting stares from 360 degrees. Cat fights and growls all claws out on two narrow back seats.

“They’re tired,” I sorta apologized with a half grin. The truth was, I wanted to push the mute button, fold them super quickly and box them until the landing, at which time I’d do the rabbit magic trick in front of their amazed father at the airport and tada! he’d take over. Sigh. As if 11-hour flights weren’t long enough…

So I separated the fighting cats, sat in the middle and sighed because we wouldn’t have a meal tray diversion for another two hours. Not that junior meals are THAT exciting on Air France, but they include a funky straw, foam games, plenty of individually wrapped knick-knacks and almost edible food (pass the chewy chicken please). See what I mean on the picture? There’s plenty of color and plastic, isn’t that kid heaven?

Alas, I still had two fighting cats by my sides. The DVD player had died two hours ago. Ran out of batteries and left my oldest one barking for more Peter Pan to no avail. Books weren’t really an option, concentration was nearing underseat level. Coloring could have been a good idea had the seats not already swallowed a dozen of my crayons and the gap between seat base and back threatened to swallow more.

OK, we could have played tag. Too bad though, the last row of the cabin doesn’t get much reclining space behind, whereas the guys in front of you are literally sleeping on your lap. So because of slight space issue, tag was a no-no.

Ice creams at the back of the plane? Now, that sounded like a life-savior. “They’ve been gone for at least three hours,” we heard from the air attendant. Sorry girls, another time. Please don’t fight on the way back. There, sit nicely.

Fortunately, at the end of the trip we landed. Then I gave them away to the next stranger at the airport. OK, not quite. I waited until I that stranger looked like my husband.

So when people ask me how I survive long flights with two little girls, I just lie: “It’s a breeze, they do great.” That’s why all my friends think I’m that professional of solo overseas flights with devil-turned-angel children.