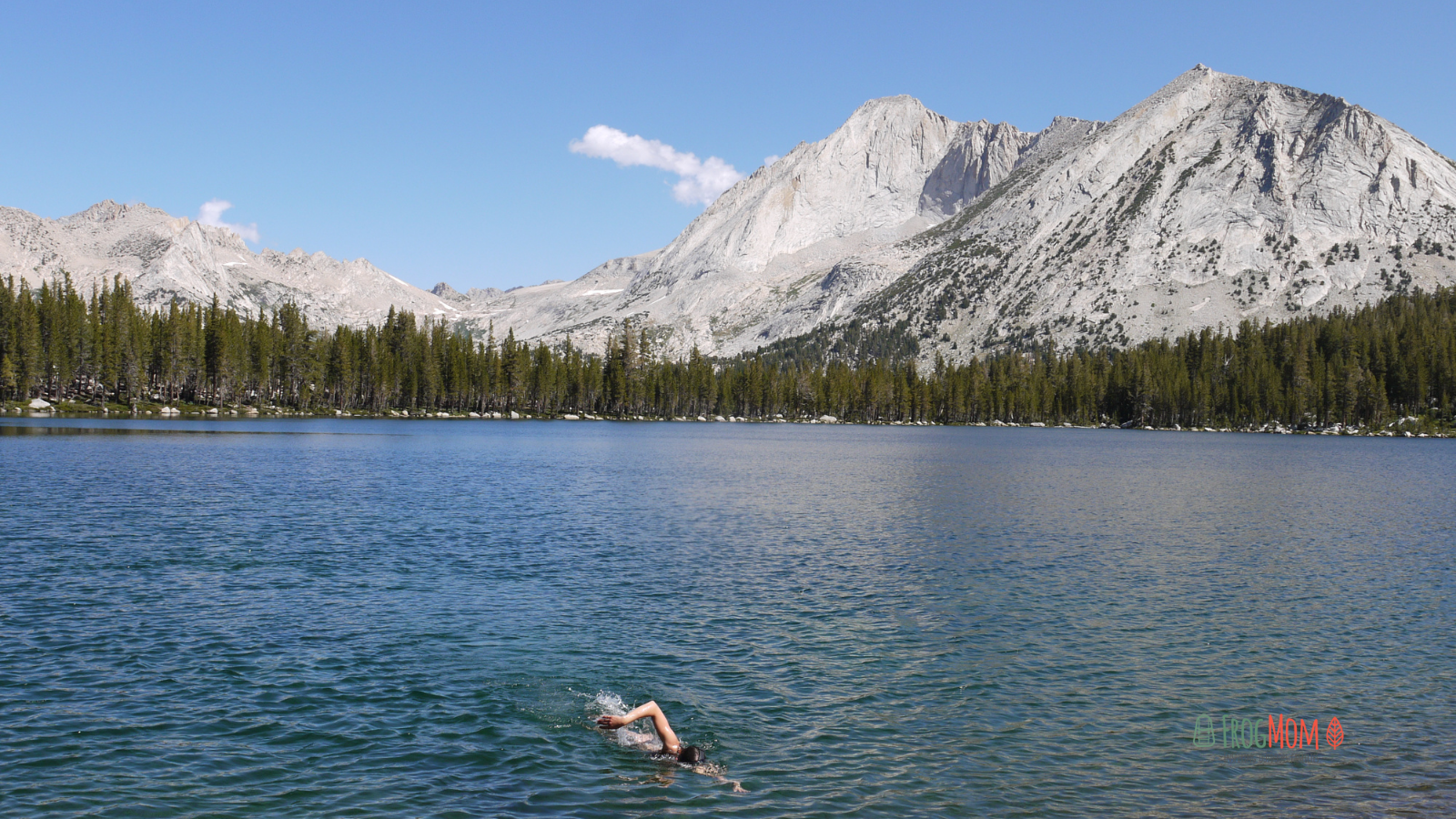 When my friends Christine and Martin invited us to meet them at Young Lakes in the Yosemite National Park, I picked up the phone and secured a Wilderness Permit for four people right away – my husband and I, plus our girls ages 6 and 7. That was in spring 2011 and our trip was planned for Labor Day weekend. Given all their Bay Area training for my hiking guidebook, I felt quite confident my girls would be able to hike the 5.5 miles and 1,000 feet elevation gain to the lake. Indeed, they did well.

I also hoped we wouldn’t hit any late summer storms because I like to camp dry and we lucked out on that one – dry and sunny all the way. However what I hadn’t planned on was the gazillion mosquitoes who mistook us for dinner. Ah the little suckers!

Since our route counted 5.5 miles and would likely take us a half day (stops included), we opted to start right after breakfast. The girls would also be “at their freshest” which was important for morale. As a result, we needed a place to pitch our tent near the trailhead the day before so we could hit the trail bright and early. Fortunately, all backpackers starting from a Tuolumne Meadows trailhead can stay overnight at the backpacker campground for $5 a night. It’s a great deal but it’s non-reservable so we showed up early in the afternoon to secure a spot. By the time we unloaded our bags and pitched the tent, the sun was still high in the sky and the girls were dying to splash in the river. Off we went!

We crossed the campground and found a wide and shallow spot where the crystal-clear waters of the Tuolumne River cascaded and slid over polished rocks. Total granite high-country bliss!

With Lembert Dome in the distance and green grass all around, we felt in paradise and simply watched our tiny fort builders at work. I think they were inspired by the movie Passage because we’d seen it days before at the museum in Reno. In that movie, a little girl arranges a circle of stones in the desert.

When the evening set in, we drove to the Tuolumne Meadows Lodge where I had booked dinner for 4 at the 6.30pm seating. Now that’s a nifty secret for any stay at Tuolumne Meadows. If you don’t feel like cooking dinner, the lodge is the only sit-down option around and it’s served family-style in a rustic atmosphere. We raised a toast to our trip with an ice-cold Mammoth Brewery beer, the Ahwanee – my fave. Can’t beat that!

Back at camp, backpackers trickled in all night, probably having driven from the Bay Area after work and looking for a place to stay. The camp was now full and we shared our space with two other tents, as did most other campers. Some backpackers left before the crack of dawn, probably looking at a day much longer than ours. We got up at 7am and packed.

After folding the tent, we walked over to our car and got our backpacking food supplies out of the bear boxes. They were already prepared in two bear canisters and ready to go – along with the biggest backpacking loads you’ve ever seen! Geez, my dad always made fun of my mom because she traveled with too many bags and he would make fun of my backpacks too. I need a Backpacking Light 101 crash course! As for my girls, they each carried a day snack, a water bottle and their sleeping bag. My husband and I shared the rest, including some amazingly optional – but oh how comfortable – butterfly folding seats.

Crossing the meadows over to the Parsons Memorial Lodge, we stopped at the level of Soda Springs so the girls could have a look at the water naturally coming with bubbles out of the ground. Sulfur smells are strong around there!

After a quick pit-stop and water bottle-refill at the lodge, we made our way up the hill and left Tuolumne Meadows behind, resolutely headed towards Young Lake.

One of the memorable parts of the trail was the crossing of a giant granite slab where we sort of wondered where the trail was. It looked like a sea of grey. “Look mom!” pointed the girls, spotting a cairn and then another. Quickly we got back on track and after having forded a creek – on a fallen log if you please – the real climb started. On the bright side of life, it was consistently going up with very few of these treacherous up-and-down-and-up-again trail tricks. On the let’s-get-real side of life, the little one whined that her pack was too heavy and the older one was tired so we stopped.

Come on girls, shape up already! Of course I couldn’t say that because we were a good mile from our destination and they both needed encouragements. Instead I said “You’re doing great girls, we’re so close!” And it was true. They’d covered most of the way like little troopers and we were less than an hour away. Swiftly, I clipped the little one’s sleeping bag to the chest strap of my backpack and we carried on. Thank God for the extra carabiners we always bring for kicks.

As soon as we crested the abutments of the lake and meadows appeared amongst the pine forest, I knew we were reaching our goal. My 7-year old took off running. That one, she’s got such a competitive streak that she always wants to be first and that includes any hike with a goal. “I’m here!” she yelled and at a bend of the forest, I saw her standing by the clear blue waters of Young Lake. Done it!

My husband and I looked at each other, exhaled loudly and dropped our bags to the ground. What were we thinking when we packed! Feeling much lighter now, we explored the surroundings and quickly pitched our tent close to the trailhead because we hadn’t set an exact meeting point with Christine and Martin. We wanted them to find us. The girls even made a rock arrow on the trail but we feared that wouldn’t be enough so we wrote a short note on the only piece of paper we had and balanced it on the “Young Lake” metal signpost.

That afternoon, we went for a small walk around the northern side of the lake and couldn’t believe how beautiful it was. Across the lake a giant rock slide came down a sharp mountainside into the lake – Ragged Peak. The shore where we were standing was a series of mini-pine tree islands separated by multiple streams, each coming from snow melting above on higher peaks. A furry green ground cover and short bushes gave the lakeside a very scenic look. We hopped over streams back to our camp where Christine and Martin arrived. And the mosquitoes too.

Now you’ll think I’m blowing this out of proportion, I could have ignored a few buzzing bugs and called it a night. The thing is, I’m not the mosquito magnet in our family. My husband and my youngest girl are. I usually wear thick fleece layers to prevent too many insect bites and ignore the rest. Which is fine because I don’t think I get bitten a lot. However my sweet youngest one is too sweet for her own good and suffers big skin reactions to insect bites. The next day, poor thing looked like she just contracted scarlet fever. Ouch, I felt bad for her. As a distraction, Christine asked the girls to help pump water and Martin showed them their climbing gear.

Once the girls ate their dinner on a boulder (freeze-dried food, yay!), they promptly retreated inside the tent where a strict no-mosquito policy was applied and they slept like logs.

In the morning Christine and Martin left early to summit Mt. Conness. We weren’t sure we were going to stay as the mosquitoes were out in numbers again. After breakfast, I was too lazy to properly wash our dishes and taught the girls how I learned as a kid – with dirt! Except I learned with sand on an island but if you rub a plate with dirt and then rinse it off in a lake, it’s visually acceptable. With pine cones, sticks and rocks, the girls spent an hour building fairy houses while we cleaned up. Now ready for a gorgeous day, we packed our swim suits and made our way to the open side of the lake just under Ragged Peak. There were still a big patches of snow on the slopes and a snowball fight ensued, won by the youngest and hardiest of our group. They just can’t resist the sight of snow!

After that I changed into my swim suit and went off in the lake, experimenting with my GoPro for underwater swimming. What I wanted to achieve was a dive from a big rock followed by a few strokes along the bottom before resurfacing. The lake looked very clear and visibility should be good. Unfortunately the GoPro camera kept falling off my head and sinking fast (with its waterproof case it’s quite heavy), which had me dive deeper each time to go get it. After three or four unsuccessful attempts, I simply returned the GoPro to my husband and went for a quick swim. Brr, it was chilly! But quite invigorating and cleansing. One day I’ll edit whatever footage I have so you can a blast watching the dive followed by the camera repeatedly falling and sinking and me coming to the rescue.

Right before lunchtime we decided to pack up and hike back that day. I think the girls were relieved because neither of them is huge on biting bugs, though they really enjoyed their nature play around the lake and the meadows. Crying shame the mosquitoes stayed so late that year. We left a note to Christine and Martin, shoved the backpacks on our backs and left. As usual, a trail you know seems shorter than a trail you discover and we walked at a good pace. Apart from one time when we got sidetracked, things went smoothly and at 5pm we were back at the car.

The car! Funny how comfortable and welcoming a silly car can seem after two days in the wilderness. We loaded everything up and drove to the general store where our brave young backpackers got treated to an ice cream. They were ecstatic, first because of the ice cream, second because of their achievement. It was only their second backpacking trip but it had been a lot better than the first time – under the rain. Next time we’ll tackle a coastal backpacking trip.