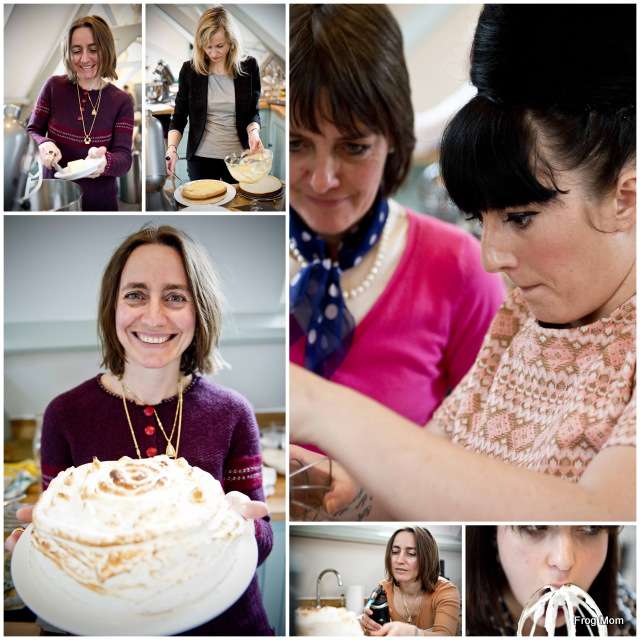 To me, the word “masterclass” conjures images of a veteran music diva training young musical whizzes who could play at the Kennedy Center or the Royal Albert Hall tonight and nobody would blink.  Now a baking masterclass is a different kind of exercise, the kind of class where you take something yummy home and learn baking tips along the way. That I learned recently as I was invited as a food blogger at an event sponsored by Anchor Dairy with British TV sensation Stacie Stewart.

I know, I know. Technically, I’m not a food blogger. I’m a family outdoors blogger. But note this: when you enjoy the outdoors a lot, you gotta feed the body right. Just ask my girls, at home I cook a lot and my 7-year old is a little mini-me in front of an oven. So baking masterclass? Yes please, by all means.

On a dreary Thursday morning, I met up with my friend Nicole after school drop-off. Her 8-year old is in the same class as my 7-year old and together, we took the tube to Cactus Studios in Clapham, giggling at what was coming ahead. Would we get graded? Would we eat our creations? Should we be worried about our skills? We were both giddy as little girls and the sky looked like it was going to come down on us in great buckets of rain and hail.

In Clapham, I looked for a glass-and-steel building with a visible professional kitchen sign but I had it all wrong. Street-side, the studios’ entrance could easily go unnoticed – an unmarked plain wooden door on a Victorian brick building. However once we pushed the door, we were in Beetlejuice-land. Funky couches, retro TV sets, bold colors and quirky back stairs – freeze time please, this is too cool! We were greeted by a receptionist behind a modern desk and I realized how little I knew about this whole thing. Apart from the address, date and time, I had no idea what was going on. This was going to be no ordinary blogger shing ding.

Had I researched Cactus Studios, I would have known they were the home of the BBC1 cook show Saturday Kitchen! and a high-profile cooking school in London. Since I like architecture, I would have been tickled by the fact they are housed in a group of old buildings that include a chapel and a vicarage – the kitchens sit in the eaves of the chapel. Of course, that’s the kitchen we spent the day in – 12 bespoke and individual cooking stations, with induction hobs and ovens and a large demonstration area. To sum it all up, I was going to attend a baking masterclass in a state-of-the-art kitchen – but really, it’s a former chapel – with a beehived baking sensation of Simon Cowell’s TV show Food Glorious Food.

Understandably, I was a bit nervous meeting a celebrity chef. I was even more nervous when I realized there was a full TV crew to film, record and photograph us. Fortunately Stacie was very relaxed, accessible and professional. In fact the pleasant thing was she obviously knew so much about baking including tricky techniques and yet she made it look so easy and down to earth. She was also a gold mine of convenient shortcuts and no-thrills baking tips, yet she didn’t sugarcoat more challenging or tedious steps when they were part of the process. I liked that honesty.

You see, our task for the day was to bake a layered meringue lemon cake pie. Yes, cake and pie in the same dessert is nothing short of scandalous. But that’s how you get a showstopper. If you saw it, you’d say “no freakin’ way I’m making this on my own.” And yet…

Before we were ushered into the kitchen, we were asked to leave our bags downstairs and not take any cameras with us. Confidentiality, folks! All the pictures you see are pictures taken by the Anchor Dairy team or my friend Nicole who took her iPhone. We hopped on high kitchen stools in two neat rows facing a beautiful wooden counter. Stacie got settled with the mike and cameras started rolling. You know when you watch a TV show and from start to a gourmet finish it’s roughly 20 happy minutes ? Well that’s a big old lie.

For the lemon meringue cake pie recipe, we were in the kitchen approximately 3 hours and it’s not like we dawdled. First came the demo – Stacie showed us how to make the first cake. Some of the bloggers took notes, I was counting on the printed recipe. Stacie made a Victoria sponge cake and while it baked, prepared a lemon curd from scratch. Once the lemon curd was in the fridge, she cut and baked two layers of puff pastry and while they baked, whipped up a snazzy Swiss meringue. Then she assembled the cake and torched it for the wow factor. Got that?

I knew I should have taken notes.

It was our turn now and at the beginning, most of us looked slightly disoriented. Wait, where were the mixing bowls? Ah yes, in the drawers. And most of the other utensils we’d need to. The ingredients were pre-measured and ready at each cooking station. All we had to do was use them in the right sequence, step by step. I’ll say, it was easier said than done but we all progressed roughly at the same pace. Some other bloggers did really well and ended up with a beautiful cake worthy of a fancy pastry shop. Mine wobbled a little, my puff pastry rounds didn’t quite pan out as planned. However torching the Swiss meringue with a handheld blowtorch was a riot – if startling when the flame came out. The best part? We didn’t clean any of the mess. How often do you cook and not have to worry about spilled sugar or dripped egg white? That was really cool.

After we finished our cakes, Stacie did a second demo for mini pork pies and at that stage I was starving. I hoped we’d stick around until they came out of the oven because they looked terribly mouth-watering but our time was up. The second baking masterclass with members of the public was about to begin. Out we went, feeling terribly sad about those mini pork pies! The last tricky bit at the studios was sliding the assembled cake in a paper box and carrying it home via tube and bus, stopping at my girls’ school to pick them up. Did I mention it snowed the whole day? It did but it was a fun day.

The cake pie was a big success at home and it was so big, I should have invited friends over for dinner.

Before I finish with the official video (you’ll see me smiling a lot, talking not), I’d like to share two other versions of the day by others who were present: