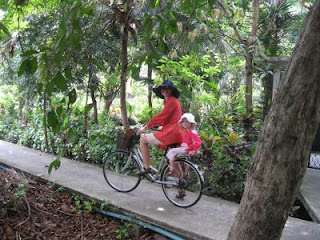 Bang Krachao peninsula, known as Bangkok’s green lungs, is a welcome breathing escape from Bangkok only a 10-minute boat ride from the bustling Klong Toey dock area. Think 11,810 rai of protected mangroves and orchards in Samut Prakan province just across the river.

How come the area is so pristine and undeveloped? Totally out of the way, Bang Krachao is tedious to access by car (count an hour’s drive) and infrastructures are minimal. Very few roads, no tourist office, no detailed maps. Most people go there on organized bike tours but going solo is what we did.

Although the peninsula counts the 200-rai Si Nakhon Keun Kan park locally known as Suan Klang Central park, the area’s most interesting parts consist of privately planted coconut tree orchards accessible only by foot, bicycle or motorcycle. Between (i) a man-made groomed landscaped garden with fountains, pedal boats and paved paths and (ii) a maze of elevated pathways going through a thick tropical forest, I go for the latter.

After I found more details on how to get there in the newly published Bangkok Guide for Kids by Kids in the “Biking” section, I organized the trip. The day before, we called a number to reserve bikes but we didn’t find the same people on the other side so we improvised. Fortunately, we had our Thai friend Sim with us because it’s non-English speaking land.

At Klong Toey Pier 7 next to Wat Klong Toey Noi, we boarded a long tail boat whose benches advertised ABC Amazing Bangkok Cyclist (B100 return trip). On the other side, there was a “Bike for rent” sign at the pier and we rented five bikes (B100 each) for adults. We had my two girls with us but since there were no child bike seats, two thick towels were strapped onto back racks for them to sit on and that was just fine.

Khun Piak, the rental guy, started the bike business a year ago. During the week he’s a docker but at weekends, he rents bikes. He asked us where we wanted to go and we returned the question. Since we didn’t know the area and there were no maps, that was an odd question. Thank God Khun Piak volunteered to guide us and led the way.

At first, he planned to take us to the floating market and started on the main road but then I asked if he could take us to the green areas. Sure he could. He veered left and asked how comfortable we felt following him. The only way to explore the forest is to bike on narrow pathways roughly 2 to 3 meters off the ground. No side protections, no railings, possibly human or motorcycle crossings. Any fall would end up in the mangrove.

I consulted with my group. While we were hesitant, we decided to give it a go and boy, were we rewarded. It was simply gorgeous. At first, we rode our bikes very cautiously. I was right behind Khun Piak and expected to hear a loud wet thump any time behind me. One of us had not ridden a bike for 20 years! Lo and behold, we held our ground.

Focusing on staying on track, we entered the mangrove. Coconut trees planted on terraced islands alternated with milky canals. Lush ferns loomed over us with areca nut trees, mango trees and banana trees. It was as green as green can be and we loved every minute of it.

Ideally we need to come back on foot to enjoy the landscape more peacefully. The “staying in the middle of the path” part was a bit stressful.

After many turns and unmarked intersections (don’t go there without a guide), we reached the Bang Nam Phueng floating market. Had we not seen the back roads, this would have been the highlight of our expedition.

Bang Nam Phueng Talad (Honey Market) is a lovely low-key weekend and holiday market where traditional Thai confections and foods elbow natural herbs, plant-based cosmetics and fresh produce. I brought back mulberry green tea, dried roselle hibiscus flowers, safflower tea, dried nuts and blue flowers that can be used as tea too, as well as a jar of honey with a chunk of beehive in it and roasted coconut flakes.

Citronella and ginger liquid soaps were enticing but I already had too much weight in my suitcase. I also got sticky rice with mung beans and bananas steamed in banana leaves to satisfy a hunger craving, as well as a fresh coconut to drink. I was impressed by how neat and clean the market was. Judging by the looks we got, I’d say not too many foreigners venture out here.

Along the canal, wooden boats can be rented for B20 and some food vendors arrive by boat to set up small restaurants on the boardwalk. By the temple, a man sat behind five plastic basins with different fishes and turles. “If you release a fish in the water, it will take away your sins,” explained Sim. For the fun of it, we scooped out four fishes and my girls kneeled by the klong to release them in the canal.

It was time to head out and Khun Piak took us back a different way, snaking through the Si Nakhon Keun Kan park back to the pier. As I said, I’m not a huge fan of man-groomed nature when there are alternatives around but it’s a nice place for a family outing and I can see a Sunday picnic on the grassy lawns by the lake. Rental boats include pedal boats as well as kayaks. A few minutes later, our trip ended by the pier. It’s right next to the park.

We were delighted by this green escape minutes from Bangkok’s urban concrete inferno. Who would have known…. Let’s hope Bang Prachao resists the real estate pressure. We saw quite a few new houses being built.

If you go there, do your part and be respectful of nature. It would be a shame to lose such a beautiful outing to capitalistic greed. Bangkok does not have that many green spaces to spare. This one should be protected and preserved.