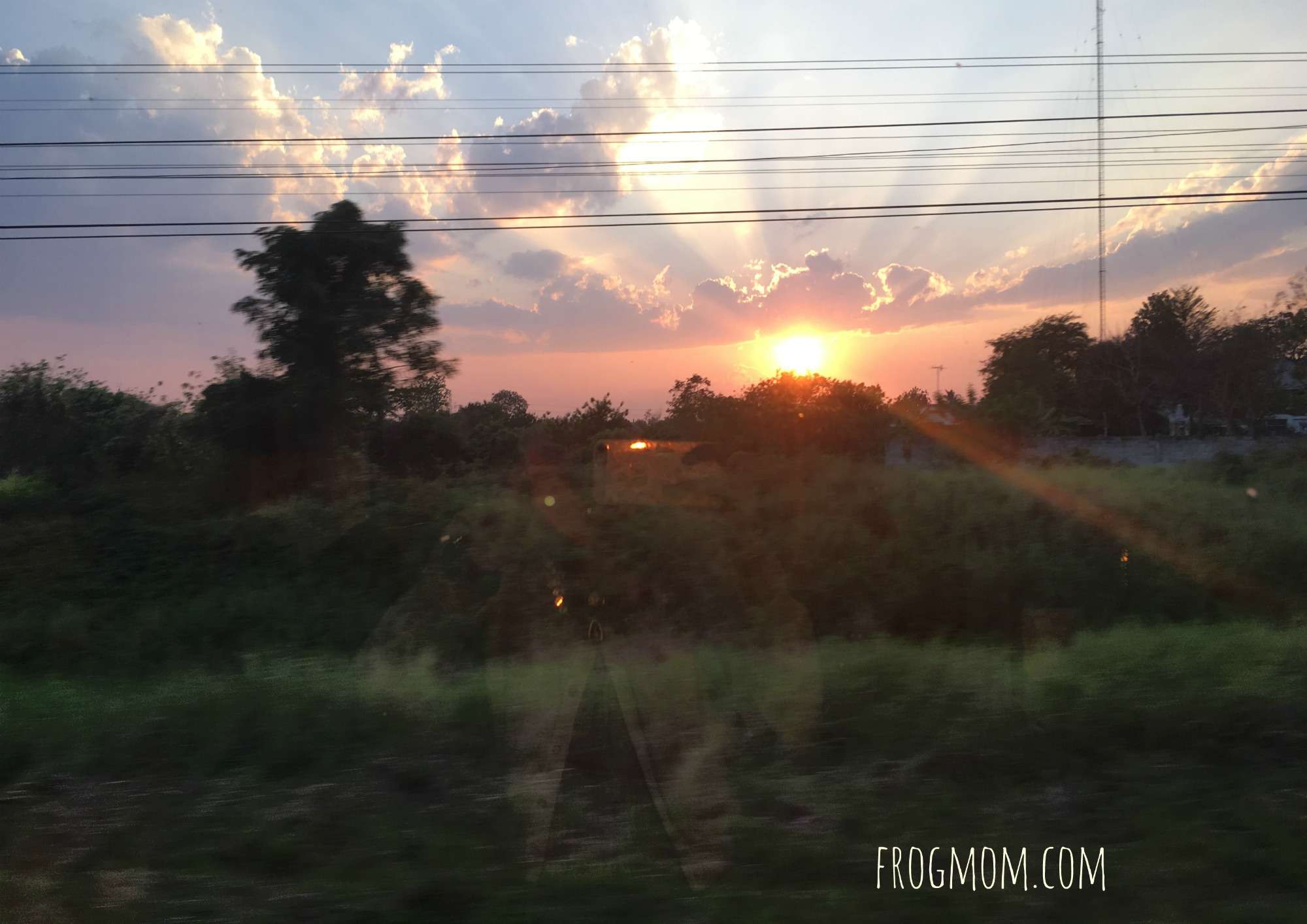 Last week, I was in Thailand and I took a Bangkok – Chiang Mai train with my uncle’s family to go trekking in the mountains near Mae Hong Son. There were 8 of us, including 4 children, ages 12, 10, 8 and 5. It was my first time going on an overnight train in Thailand and I really enjoyed it. Going north, we were on an old train that was used during the week when there are fewer passengers but as we came back on the weekend, we traveled on the new train. This is my trip report on both overnight trains, reviewing everything from interior design to sleeping arrangements, food and toilets on the train, trip terms and conditions and my favorite things. 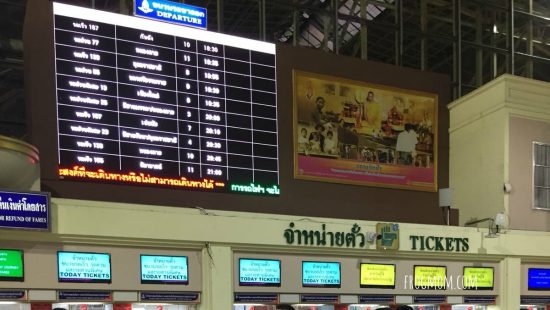 On the day of travel, we arrived by BTS  at the train station in Bangkok, Hua Lamphong, around 5pm and waited about an hour before boarding the train. When boarding was allowed, train controllers checked our tickets and directed us to the right carriage.

On the old train, the interior was white with leather seats and looked dusty and suspicious. We were travelling second class with sleeping berths that were installed later by the controller around 7.30pm. When we got in, they looked like regular seats along the windows with a “sloping roof” where the upper bed would later be unfolded. There’s also a 3rd class with seats that don’t recline (in the 2nd class they collapse into a flat mattress) and a 1st class with pre-installed beds. 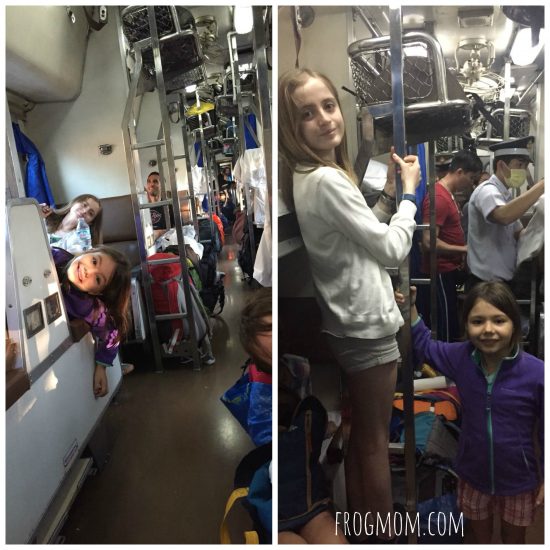 Everybody slept in a corridor with the seats installed into beds, each bed had a pillow, a mattress, clean sheets and a towel-like blanket. Privacy was originally a big concern for me but I discovered that there were walls in between the seats/beds and that curtains could be pulled to completely hide the bed from the corridor or the outside. About half the carriage was full so wasn’t too noisy and the train wasn’t a big problem either, falling asleep did take a bit of time though because the lights never turned off during the whole trip and if I left my blanket, the carriage was quite cold. As a result, I slept with interruptions but most of the group slept the whole way through and there was universal satisfaction with the sleeping experience. The next morning we woke up around 6-7am and the controller came to fold the beds and install the tables for our breakfast. We arrived shortly afterwards into the station at Chiang Mai. 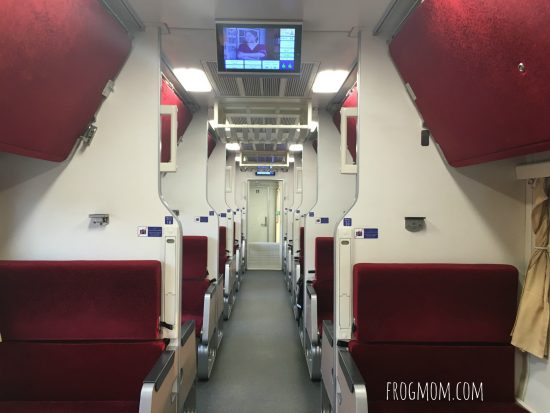 The new train was similar in design but much cleaner (only a few months old!), much quieter (double glazed windows) and a lot colder (extremely good air conditioning system). It was freezing! There were TVs in between each alcove, showing nonstop Thai TV shows (in Thai, no subtitles in English) and informations on the train on the right of the screen that were annoying at first but soon easily ignored. 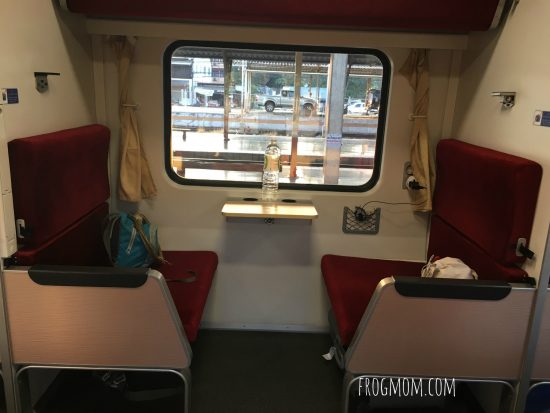 The main differences were:

The best part of any overnight train trip!

The old train’s toilets were literally a hole in the floor. Not kidding. They were Thai-style squat toilets over an open hole and while “on the toilet”, I could see the train tracks zoom by. They was a tiny sink with water and no toilet paper nor infamous Thai “butt” water spray. Was there a light on the ceiling? Honestly, I don’t remember any but I do remember the clear glass window with full view on the outside and that made me uncomfortable. What if someone saw me squatting over the hole? Scary thought. As far as cleanliness, it was, all things considered, quite clean and not smelly. I bet the train tracks are — smelly and disgusting. Sorry, I didn’t take any pictures because I went as night and stayed as little as possible. 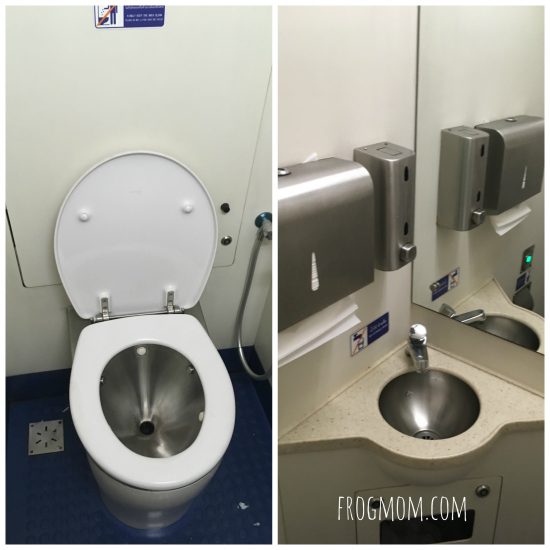 The new train’s toilets had stainless steel European-style toilets with toilet paper. Boom! The restrooms included the toilet, an airplane-size sink and a mirror. Also, the lighting was perfect and the toilet windowless (a relief). In addition, other passengers could wash their hands or brush their teeth at a double sink outside every toilet. Fancy that.

Both times, we brought our own dinner but we ordered breakfast on the old train. Out of curiosity, I walked over to the dining car in the new train to take a look with my cousin. The new train’s dining car was quite pretty with a bar in the back to order food and drinks, and four tables with benches for four small/squished people per table. This was only in the new train. 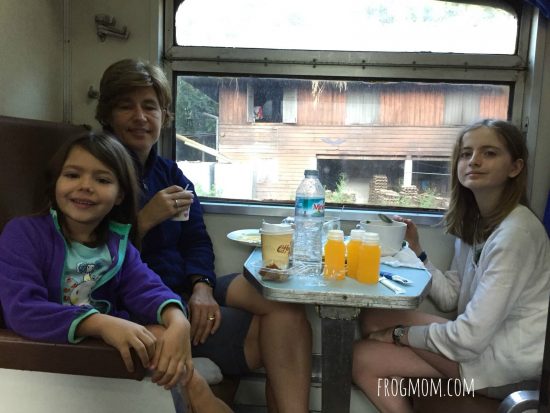 The old train had no dining car. Instead, the controller brought food menus to us at the beginning and my uncle, who speaks Thai fluently, ordered breakfast in Thai. That was very cool. Breakfast came directly to our seat, covered in clingfilm. There was so much clingfilm on each tray! The breakfast menu included European food as well as a Thai rice soup, which is what I chose. The European menu was mainly cookies, pancakes and toast. Every breakfast came with one banana, one banana muffin (in a plastic box), a (plastic) bottle of orange juice and a hot drink in a paper cup. That’s a lot of plastic. On the green side, breakfast cutlery was stainless steel and food was served in real chinaware. My breakfast soup was slightly oily and when I found something orange and suspicious inside, I stopped eating it, but before that, it was very enjoyable and not spicy. Also, it was so much food for one person! 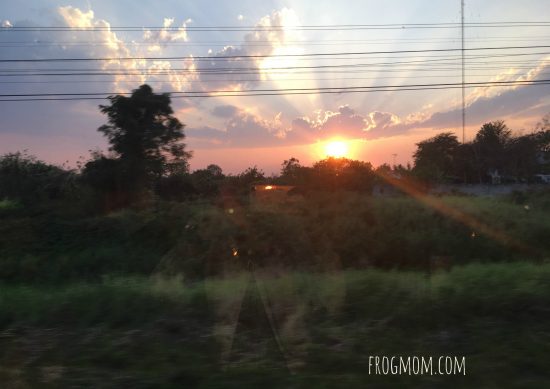 When we left Bangkok, sun was setting and soon, it was dark outside. When we left Chiang Mai, I was able to photograph the sunset outside my window. In the morning on the Bangkok-Chiang Mai leg, we passed a lot of small train stations (with dogs and chickens on platforms and train tracks) and saw Thai countryside with corn (?) fields, teak forests and small farms. We didn’t see any fires outside with people warming up around them, indicating that the countryside was already warm enough when we got up. We had no idea of the temperatures except inside the train … where it was cold.

As we were up around 6.30am and the sun rises around 6am, the sky was bright and were able to enjoy the views during two hours before getting to each destination.

In the old train, we stored our suitcases and bags on metal racks hanging from the ceiling between beds. I preferred this storage system to the new train’s, because each bed had a designated area to store their stuff.

In the new train, most luggage was stored on the floor under seats and there was a luggage rack between TVs but it was smaller (for small luggage) and plastic instead of metal. If you slept upstairs, your luggage would be underneath the low bunk and tricky to access. I didn’t like that but fortunately, I had a small backpack with what I needed next to the top bunk where I slept.

Have you ever been woken up through a loudspeaker message? I now have, twice. At 6.30am on both trains, there was a recorded message in English announcing that we would soon be arriving. I think that it was meant to stress people so they would be ready quicker, as we still had 2 hours of train before arrival. Luckily, the controller saw we were children, so left all of us more time to get ready and folded our beds last in the carriage. How considerate! Once we were up, my aunt, who’s super organized, had us all packed in 10 minutes flat, including the younger children.

My aunt suggested that I read the Terms & Conditions of the train trip on a paper attached to the booking and a few sentences really made me laugh. One of them said, “If your train is late, do not bother us because we are sitting in offices, not driving your trains. So it is not our fault.” Another one said, “If you somehow lost your ticket or did not follow our instructions to retrieve it, this is your fault.” Indeed. So tactfully said.

What I Loved About the Bangkok – Chiang Mai Overnight Train

In general, I much prefer trains to planes or cars to get anywhere and I really loved this new experience. The Bangkok – Chiang Mai overnight train is very different from night trains in Europe, as it has no private cabins and each pair of seats comes with their own table. We had so much space to run around, compared to European trains, which I think is great for children. We played board games on our tables and nobody told us to shush, which surprised me considering how noisy we were. Also, train controllers were super nice and it was really easy to get hold of them if we had any questions or concerns. In Europe, it’s usually not that easy to grab a train controller. 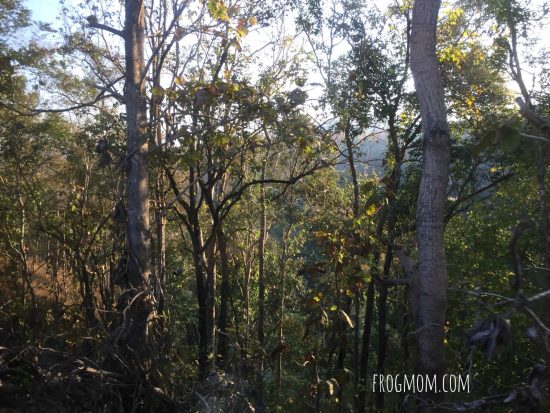 My favorite part? Getting to the top bunk was great fun and included pulling a wall ladder that stuck out and could be folded back. We played a lot with it, hopping from ladder to (opposite) ladder in the corridor. This is not an option in European trains but I suggest adding similar ladders on the walls of corridors as it is great fun to go from one to another and quickly tires children, helping adults put them to sleep easily.