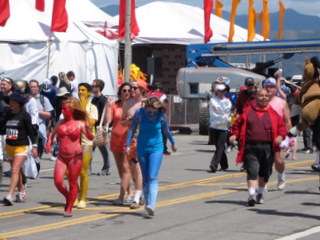 Bay to Breakers, the iconic San Francisco foot race that starts on the San Francisco Bay and finishes on the Pacific Ocean, celebrates 100 years today! While only serious athletes rose early this morning to run the 12 kilometers going through town for the medals and make an actual  run for the finish, the real party was on the streets with tens of thousands of dressed-up participants.

Clearly San Francisco’s response to the mid-year Halloween-deficit-disorder, the event was a relatively G-rated gig thanks to the no-alcohol policy. “Why are there so many men dressed in girls?” asked my 5-year old pointing to a dude in pink tutu. “This is Bay to Breakers sweetie, that’s why you’re dressed as a unicorn.”

This was my first Bay to Breakers (B2B) and after the skies cleared up this morning, I decided to take my girls. After all, it’s not every year B2B celebrates 100 years and I’d read alarming reports of will-there-be-another-B2B-after-2011? I told my girls to find a costume. Quick! We pulled the costume box out of the basement and hustled.

Fifteen minutes later, my 7-year old was a pink bunny, my 5-year old a unicorn and both my girls suggested I do not wear my Wonder Woman costume. So I went for a casual bell-bottoms faux fur outfit. I packed our bikes in the car, parked by the zoo and we biked our way along the beach to the finish line at Great Highway and Lincoln.

At first my girls didn’t see to many people in costumes. “Why are we dressed up mom?” they asked. Just you wait little girls, it shouldn’t take long. Sure enough, we stumbled upon a party of bridesmaids being photographed at the free photo booths, still wearing their race bibs. Surely, they can’t have run the 12K in poufy dresses. Can they? What do I know, maybe they did.

The guy who was dressed as Pamela Anderson in his sexy red life guard outfit with overblown boobs was better suited to run for sure. Good running shoes he had.

I was on the lookout for two different types of animals who, from what I’d seen from previous B2B editions, were the trademark of the race and something that made it so San Francisco-specific: groups in coordinated costumes and people in their birthday suit. I guess because some groups naturally dissolve (in alcohol) or disperse along the course, there are fewer groups to be found at the finish line but we still found a few.

However it’s the dudes in the nude that really got my girls’ attention. “Mom, this man’s naked!” Why, you’re right, and this other guy too.

Ah, Bay to Breakers. What would we be without its free-to-be-you-and-me attitude? For those wondering if there were any children there besides mine, the answer is yes. We saw lots of kids being rolled away in strollers, others enjoying the show on their parents’ shoulders or walking in costumes alongside their folks.

It’s super family-friendly and since it’s a day-event, I applaud the organizers for the no-booze policy. Geez, some participants are so inhibited naturally that with drinks on top of it, it must be a real riot.

In the kid-friendly category, we saw a man dressed as a banana and his gorilla friend (“Fifth banana walks the finish line!” announced the race commentators on the speakers as he made his way through), a giant Cookie Monster, a Muppet Show quartet consisting of Kermit the Frog, Miss Piggy, Animal and – blank – gosh, who’s that last muppet?

We also admired Batman and Robin, a few princesses, a Wizard of Oz ensemble (with a very good and green Witch of the East), the full Adams Family (minus the Thing) and a group of gnomes (straight out of Gnomeo & Juliet).

In the creative category, a few costumed groups totally stole the cake. First were those who were literally carrying cakes on their heads, thus celebrating the race’s 100th anniversary. We spotted two ladies by Ocean Beach with sparkly birthday cake hats and a giant cake with a candle at Speedway Meadows.

Lying on the grass at Speedway Meadows was a group of Borat fans dressed in the highly graphic pink bunny costume. By then my girls were totally jaded and didn’t even notice them.

The group that everybody was stopping for group photos was a bunch of dinner tables walking around with signs on their back saying “No reservations taken” or “Happy birthday.” They were pretty funny and I imagine extremely relieved to be near the end of their ordeal because carrying a fake dinner table on your shoulders for 12 kilometers can’t be that comfortable.

We biked up to Speedway Meadows to see the costume contest announced by the speakers at Ocean Beach. On the way, my girls were appalled at the amount of plastic trash littering the road. Thanks to plastic-wrapped drinks, snacks and what-nots, the Golden Gate Park was a giant trash can for the masses. Eeeew!

By the time we got above Speedway Meadows, locked up our bikes and found a dirt trail down to the meadow, a band was playing on the stage (I believe it was either Geographer or Loquat). Obviously, we had missed the costume contest. Boohoo, will I ever know the winner?

Down at the meadow, people let their hair down, raided the beer garden and enjoyed an unusually sunny day on the grass. It was peace and love and yet more freebies of the single-use kind. Sensing the end of our excursion, I looked for more stunning  B2B costumes and got lucky like this group of masked avengers or a triplet of totally funky girls in pastel tutus and striped tights. I wish I could publish all the photos I took but this is already getting too long so I’ll cut it short.

On the photo aspect, there’s something I noted and that’s pretty cool for people like me out for a good shot: most people to be very gracious about having their pictures taken and more than willing to strike a pose. Sure, part of the fun is to be seen and photographed, hoping to end up in the slideshow of SFGate. But above that, people looked jovial. Grumps were definitely the minority.

My two girls got a few comments on their outfit (the unicorn was popular) and we had an odd moment when a group of Asian girls approached us for a photo. They said they found the girls’ costume cute and asked if they could take a photo with a banner for their school. Apparently they were running to be president of their school (or class?). I’m nice so I said yes. Initially my girls refused to hold the sign but I told them it’d be over quick. That’s where it got weird.

A man was filming the teens and at his signal they started jumping up and down while screaming “Vote! Vote! Vote! Vote!” around my girls who were not amused. They gave me the look that said “Mom what did you get us into?” Hmm, did I just say yes to that? Sorry girls, that was unexpected.

After the “Vote!” episode, we hurried back to our bikes. My girls were tired and they’d seen their share of costumes for the half-year. We unlocked  the bikes, clipped our helmets and inched our way back against a strong wind on Great Highway. Boy were we glad to find the car.

In hindsight, B2B lived up to my expectations except I expected to find more outrageous groups. Really? Yes, really. I guess you have find them closer to the start line before the steep part on Hayes Street. Overall it was the best excuse to go out with our bikes today even if I know that my family in France will be reinforced in their belief that we live amongst crazy hippies.