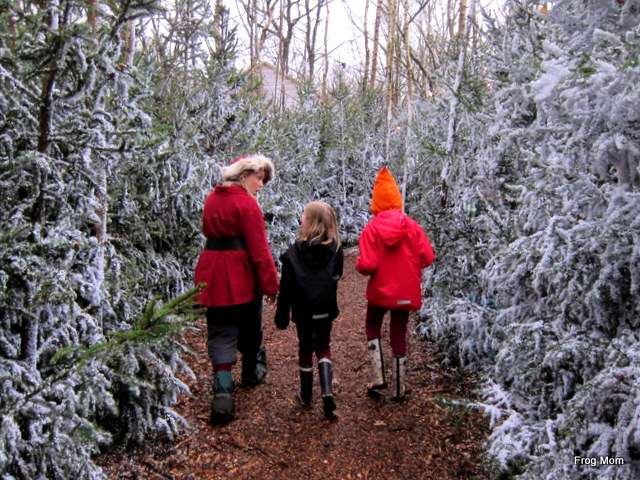 > Believe in the Magic at Lapland UK

Believe in the Magic at Lapland UK

My favorite Santa lives with Buddy the Elf at the North Pole or in Lapland, where elves build toys in white-washed Scandinavian cottages and eat candy canes year round. Yes it’s common knowledge the real Santa lives in a snowy landscape surrounded by elves. That’s why I’ve never been fond of seedy Santas waiting for lines of kids in shopping mall “grottos” that look like bad party photo booths. There’s no magic in them and I’ve never told my girls they were real. To find the real Santa, we’d need to fly to Lapland and that’s far and expensive. However Lapland UK appealed to me because it was an outside experience. Advertised as a theatrical production transporting children to Father Christmas’ arctic homeland in the UK, Lapland UK is set in a forest, under our great big sky, surrounded by real trees. All it’s missing is real snow and arctic chills but otherwise, it’s the best Santa trip save for the Lapland expedition.

It started with a letter, a personal invitation from Father Christmas to my girls, ages 7 and 9. It was waiting under their pillow with their name on it. Printed on parchment-looking paper with burnt edges, the letter was written using an elegant cursive font easy to read for children. Even my 7-year old didn’t have any problem reading the words and she did so quickly with a look of disbelief and wonder on her’face. “Mom, Santa is inviting us to come and help him?”

Short of elves, Santa was inviting good children to come help him build toys. The trouble was, the invitation said nothing about a date or meeting point. Ever the problem-solving elf, my 9-year old wrote back to Santa asking for the address and the date, then taped the letter to her bedroom window that night. Efficient! Overnight, Santa answered. The rendez-vous was set to the next morning at 10am in Kent.

By 7 am the next day we woke up our troops but my 9-year old felt feverish and had no will to get out of bed. Poor thing had contracted a first bad cold. Quickly, I changed our transportation plans. Since we don’t have a car, we were supposed to take the tube to Charing Cross Station, then a train, then a taxi to Lapland UK. I opted to use my brand new Zipcar card and reserved a car online in  cinch. Since it was 1.5 miles away, I hopped on my folding bike to go get the car. An hour later we were all heading east towards Kent on big roads, my girls snugly sleeping in the car.

From southwest London, the trip took us exactly an hour and 30 minutes and we found the Bewl Water Estate without any problems. Following the signs to Lapland UK, we parked in the mud and got ready for the big Father Christmas adventure. Rainy day! Fortunately we’d taken rain boots for our girls.

In the Antichamber for Lapland

One thing about Lapland UK – you better be on time. The program doesn’t wait for you and if you miss anything, there’s no making it up. We were exactly 10 minutes late for our time slot but it turned out not to be a big deal. As soon as we gave our name and time slot at the entrance of a big dark barn, two elves ushered us in and we followed a path lined by stick trees under a canopy of white fairy lights. The zigzagging path led us to a beaten dirt clearing in front of a big door, with a couple gigantic mushrooms on the sides. That’s where 50 people or so waited for instructions from two elves.

Now, my girls are 7 and 9 and they were on the older side of the young visitors (though not the oldest). The elves wanted us to open the door by miming a formula/song. We did it but to no avail. The door remained closed. As always, the magic number is 3 and it’s only on the 3rd try that the door finally opened. There were three more occasions when we needed to repeat a phrase or action three times and at the end, it was getting old even for my 7-year old who knew full well the first try would never be the right one.

Finally, the giant door opened, a door worthy of a storybook movie with fairies and elves. On the other side, the magical arctic landscape of Lapland UK – or almost. Based on the website, I expected a fully snowed-in landscape, truck-loads of artificial snow that looked authentic and white. Sadly the rain seemed to have washed away the arctic effect and the green needles of the pine trees showed through a lot more than I expected. I wonder how often they have to “re-snow” the place so it keeps its fresh and crisp snow look.

Anyhow, a Lapwoman divided us into two groups – huskies and reindeer – and led the first group – us huskies – to our first activity. The toy factory.

If not for the elves as teachers, the elf song on the black board and the wall shelves lined with wicker baskets, this might have looked like a modern classroom. Children sat in front of long tables while adults – supposedly – stayed in the background, though a lot of children were under age 5 and needed their parents to help.

At the North Pole’s toy factory, elves make toys. At Lapland UK’s toy factory, children made toys because there weren’t enough elves around. Simple as that. In this spirit, each child received a wicker basket with materials to stuff a teddy bear and dress it with a red jumper. Eagerly, little hands got busy as soon as the basket landed in front of them, stuffing foam inserts – including a heart – inside the legs, arms and torso of the fuzzy creature. Once the bear assembled, most children admired it and some started cuddling with the bear in their arms. But oh, the sour disappointment. The bears had to be returned when the elves came around to collect the bears in a big bag.

“What do you think they do with our teddy bears?” asked my 9-year old. She paused and added, “I know. They take them apart so new children can make more teddy bears.” That’s probably indeed what happens. By the time our Lapwoman guide came to collect us, loud voices erupted from the room next door where the “deer” team was having a ball. Next stop, Mother Christmas’ kitchen.

Sticky fingers, beware! Children – and adults alike – giggled as they stooped to walk into this log-cabin kitchen through kid-size doors. On red and white checkered tablecloths, small plates awaited with gum drops and white icing. When Mother Christmas came out of the back curtain, all the children hushed and listened to the story she was ready to tell. A story about Christmas, what else? Meanwhile parents sat around the room and watched their offspring captivated that very special story time. But children only like to sit still so long and the cookie decorating activity was much appreciated by the younger crowd. Aprons, chef hats, intense focus on the sweets – the children had all they needed to sugarize their gingerbread in finger-licking fashion.

As elves cleaned up, all children munched or their gingerbread man. However the “clean-up” was something that left to be desired. Elves wiped the tablecloth with damp towels and folded the same sticky aprons and used chef hats for the next batch of children. For hygienic reasons, I’d rather they had replaced everything anew.

Never mind. Now was our 90 minutes of happy time in the Lapland village. “Meet us by the gate at 1pm” we were advised.

The North Pole Post Office was a sweet small building with hundreds of letters to Santa Claus covering the walls and ceiling. A real inspiration to write and indeed, a narrow table ran along the walls offering blank letters to Santa and pencils to write. Ain’t that a nice touch?

The skating was a whole another story. It was a mess. The “ice skating” rink was in fact an artificial surface that was slippery as hell and I counted more children clinging to penguins or getting up from a tumble than making zim-zoom on the ice. It was the only activity my girls disliked and they quickly asked to get away and do something else.

Something else turned out to be lunch, a rather unremarkable slow-cooked pork sandwich with fries in a nice wood pine restaurant. To be on the safe side of the wallet, we didn’t spend much time in the store where items were overpriced anyway. The pinnacle of our visit, a small chat with Father Christmas, was only minutes away. That it would have snowed would have made the day perfect but a constant drizzle reminded that was Lapland UK in Kent and not Lapland up north.

Ah, meeting Father Christmas. That’s a pretty big moment and this particular Father Christmas had a lot going for him – a beautiful white beard, jolly red cheeks, a plush Finnish costume and a comforting laughter to start up a conversation with shy children. My girls sat down next to him and grinned at they looked down, examining their toes with acute attention. “Come on,” I thought silently, “This is it, talk to him!” This was indeed it but Santa did all the talking. Tipped off on my girls’ favorite dolls and activities, he told them a bit about how good they’d been, checked his nice list and found them on the super nice list which was a pleasant surprise to all. Now being on the super nice list obviously gave them extra credit as he asked us if the girls could have an early Christmas present. Santa leaned down and pulled out of a great big bag….

The girls were besides themselves and have been sleeping with the huskies since that day.

On the way out we saw a few live reindeer and a sleigh by the photo booth, which contributed to the Chrismassy feel. Now the big question.

Is it Worth It?

As you can see, I took the time to write a rather detailed review because I thought it deserved it. Even at their age, my girls really enjoyed the event and asked if we could return next year. The big bad point of Lapland UK is the price tag – it’s almost the price of half a day at Disneyland which is a lot of money and you don’t get as big a space or as many activities. For that price, I’d love to see healthier food options – even M&S sandwiches and meals would be fine by me, better artificial snow coverage and more activities geared towards older children. Apart from that, it was a very enjoyable half-day.

Merry Christmas to all and to all a good night!