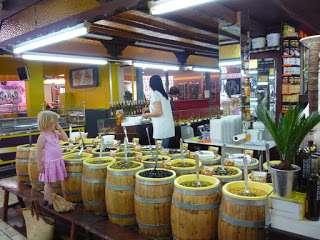 Beziers is a medieval town in crisis. Its heydays unfolded hundreds of years ago when men in arms enrolled for crusades and thousands of heretic cathars were burned alive in churches after the Abbot of Citeaux said the famous sentence “Kill them all, let God sort them out.”

The city is much more peaceful now but its narrow streets, eagle-sitting Saint-Nazaire cathedral and fortress-like Madeleine church are daily remainders of its warrior past.

Fortunately, none of that at the farmers market called Les Halles where every food lover’s dream comes true. Just take a look at the olive store.

It’s been there for as long as I can remember and the guy with a beard always likes you to taste his cured olives, capers, cornichons, pickled peppers, sundried tomatoes, tapenade and more.

Now, the olive oil is troublesome. The guy sells two varieties, none of which come from the region where’s an olive mill in Puisserguier ten miles away and another one in Bize-Minervois 25 miles away. His come all the way from Aniane close to Montpellier and Italy. Honestly, whatever happened to local products?

I had a similar experience shopping for prosciutto (which we call raw ham or jambon cru in French). There are two butchers/deli at Les Halles. One sold Parma ham coming from Italy, the other jambon cru from Lacaune, a small mountain village in the Black Mountains one hour north-west of Beziers.

Needless to say, I headed straight to the guy who sold ham from Lacaune and it was one of the best prosciuttos I’ve ever tasted.

When buying cheese, I again concentrated on local cheeses which are mostly sheep and goat, like the pungy farmer’s Pyrénées cheese, the Saint-Agur creamy blue After we stocked up on tomatoes, melons, red leaf lettuces and more produce, Marine pointed to a sign I hadn’t seen. It said “Escargots vivants prêts à cuisiner” or “Live snails ready to cook”.

Now, that’s France. You may not be aware of this crucial culinary fact, but you can’t just pick up snails and eat them right away. You got to make them “sweat out” all their insides during a month before eating them. No judgments please, it’s just a fact. So these snails had done their share of sweating all right.

When I told my father there were snails at Les Halles, he smiled and told me of fond memories of cargolade, a local snail-based barbecue. As my 3-year-old would say: Yummy yummy in my soupy tummy! Or not?