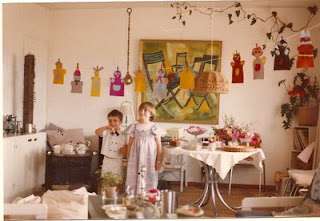 Birthday Parties: A Pinch of 1978 and More 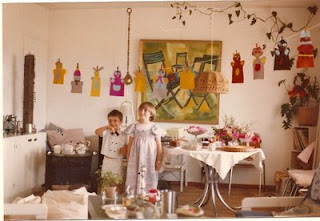 This year, I combined my 3-year-old and my 5-year-old birthday parties. Out of my mind, I opted for the at home/home-made birthday party. No entertainers, no catering services. No fuss? Think again.

As the date grew nearer, the idea of having 23 kids under age 6 running around in my home lead to several sleepless nights. I had visions of post-atomic gooey floors with chocolate cake spread on the walls and popcorn bits magically appearing until Christmas. At last, I found the answer: the backyard!

I’d never thought much of it before, mostly because it’s a steep and narrow terrain, therefore tricky to use.

The best idea I had did not emanate from me. It came from a 1978 photograph where my younger brother and I are standing in our living room under a string of felt puppets my mom made. The photo was taken on the day of his 5-year-old birthday party.

My mother was and is still very crafty (she made puppets and sets for The Night Before Christmas two years ago) and I got completely inspired.

I dusted off my sewing machine and two evenings later, I had 25 felt puppets ready to decorate. I made a point of making whimsically gender-neutral puppets using mostly primary colors with odd ears, hair and head shapes.

I knew it’d be a hit when my girls started playing with them before they were even sewn. “When I’m a mom, I’ll make puppets for 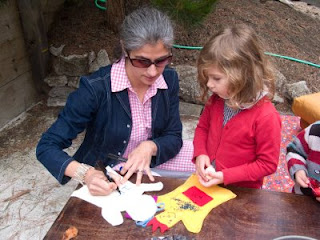 my children’s birthday party too,” confided my 5-year-old with a grin.

So as children started trickling in on the B-day, I got them each to choose a puppet and then they decorated them with fabric markers. Even the 3-year-olds got into the groove and soon enough there were decorated puppets hanging from each parent’s purse awaiting the ride back home.

Second activity was of course the tree house, where children were naturally drawn. Until then, I had no idea of the maximum occupancy of that structure. Now I know it’s about six screaming kids inside and as many as you want around.

They climbed in and out, waved their puppets through the windows, re-arranged the table and two chairs in many creative ways and later, threw the furniture out the windows. That qualifies as sheer success. 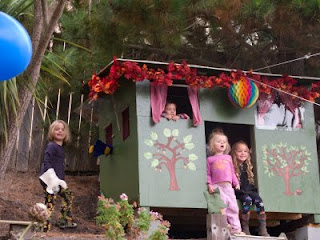 arly enthusiastic at freely unrolling TP, none of them wanted to get wrapped.

So we moved on to bobbing apples where Tiana, Andrew, Ben and Domenico each had a try. Soaking wet, Tiana succeeded twice. Out of curiosity I gave a go too, mainly because I’d never tried before. It’s not that easy! 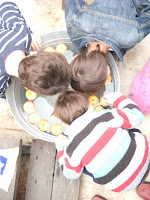 into the party, the pinata made its appearance as some guests had to leave early. Girls will be girls and mine chose a sickeningly pink blond princess as their pinata.

Since I bought it empty at a grocery store on Mission 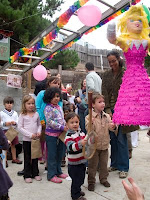 Street, my husband and I filled it with healthier alternatives than the usual crap-candy-alternative. We went for fruit leathers, chocolate bars, salted caramels, natural fruit lollipops, honey sticks and natural fruit hard candy instead.

I’m not sure the kids noticed when they all ran and tumbled to pick up candy on the ground but we felt a lot better about it. The birthday cake followed of course.

To honour my artisan clock-reparer older brother Jean, I made the cake in the shape in a clock whose needles marked three and five respectively. As additional decorations, I baked animal-shaped meringues (hedgehogs, mice and snails).

As usual, children were way more interested in the frosting and rainbow 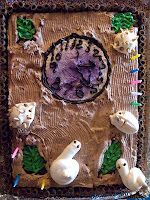 non-pareils than the cake itself. The party was coming to an end and before they left, our guests received the goodie item some had been waiting for all year: the annual selection of our girls’ favorite songs compiled by my husband.

Party over. Time to switch to Halloween mode.