In my dad’s garden in rural southern France, I love following the seasons based on which fruit or plants are available. Given the region’s warm climate, citrus trees are the first to fruit in spring and one of them is a shrub that produces adorable and extremely bitter small oranges. Not dissimilar in taste to kumquats, these oranges might be tangerines for all I know but the acidity is such that they can be compared to oranges for culinary purposes. This seasonal dairy-free cake is deliciously moist and crunchy at the same time, combining tastes of the Mediterranean — home-grown olive oil and oranges — with a subtle Indian spice. Adding medium grind cornmeal gives it an extra crunch that I really enjoyed and poppy seeds look great – they’re such an underrated culinary seed. In a word, the cake is perfect for tea time.

Before jumping into the process, let me show you the fruit as I harvested it this morning. Imagine that the small orange is somewhere between the size of a cherry and a golf ball. It’s quite tiny. While picking the fruit, I tried my best not to disturb a tiny spider that had woven a web between three branches. A recent invasion of mosquitoes after a wet spring has renewed my appreciation of spiders in terms of pest control and I certainly didn’t want to prevent this one from doing its job. 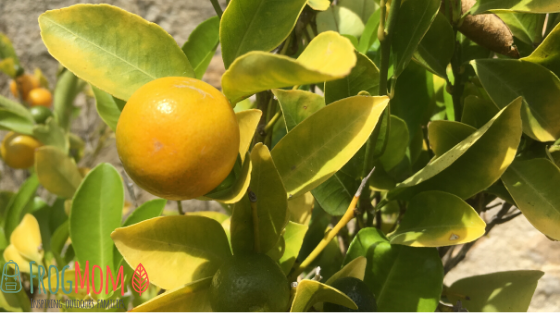 Oranges and lemons said the bells of St Clements, or so goes the song. For soil reasons, the bitter orange shrub is right next to a very productive lemon tree so I couldn’t resist picking a few lemons too. Who knows, there might be a lemon tart in our future. 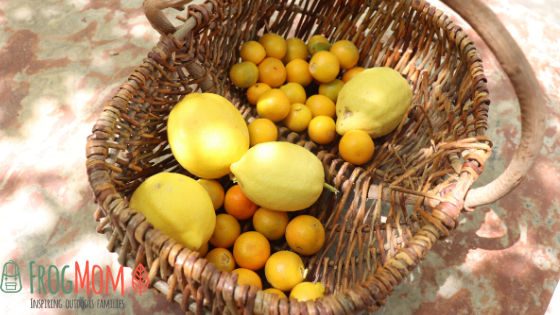 Now, I was ready to get down to business. Before doing anything else, I wanted to grind the cardamom pods in a mortar to extract the seeds as it’s a time-consuming process. If you love cardamom, this Indian pod whose seeds give chai tea its unmistakable flavor, you are in for a treat as it makes a guest appearance in the list of ingredients. Our mortar uses an olive tree pestle and by pounding away the pod casing, you expose the seeds with their rich flavor. Not to be underestimated, pouding cardamom pods can be very therapeutic during times of lockdown or on a lazy weekend. 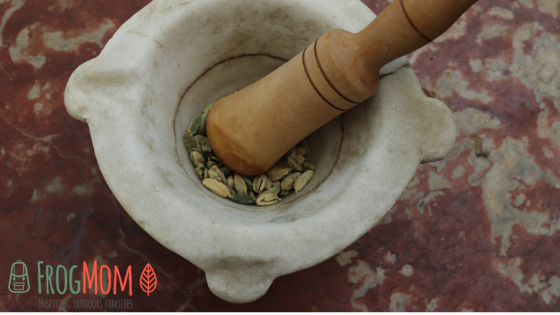 About 10 minutes later, this is what I had. Granted, it’s a lot more than I needed for this recipe but I was also planning to bake my favorite olive oil and maple syrup granola with cardamom so I upped the quantities accordingly. 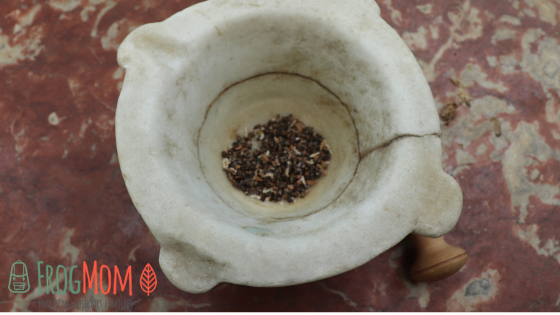 If you don’t have a mortar at hand, you can use ground cardamom instead – it’s easier to find in stores than cardamom pods anyway. I’d like to show the quantity of oranges I used as you’ll likely not find the same oranges. I crammed as many tiny oranges as I could in a cup, which was 10 oranges. As long as you stick to the same volume of other oranges, you’ll be fine. Ideally, kumquats would be the best substitute as it’s the same of tartness. 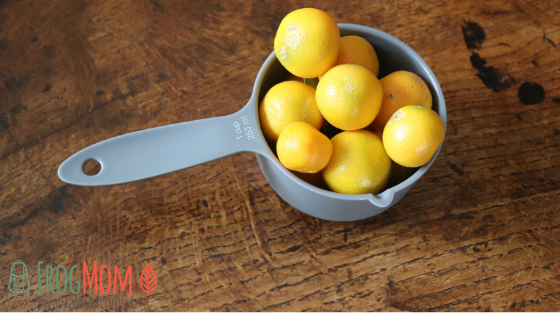 Since the skin of these tiny oranges was so thin and the pips so small, I didn’t see the point in seeding them before blitzing them with sugar in a stand mixer but you may want to adapt based on the oranges you use. Personally, I do like a bit of zest in my cakes for texture. 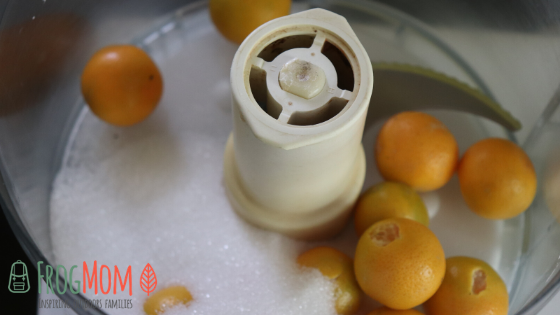 Next, it was a matter of mixing all dry ingredients in a separate bowl. 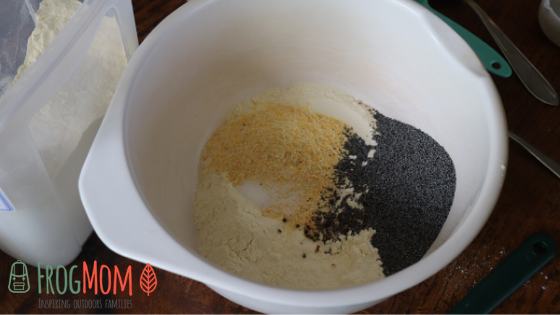 Now, I’d like to say something about the olive oil I used. We’re lucky to have olive trees in the south of France and this oil comes from the extraction of olives my dad and I harvested in November 2019. The olive mill gave the resulting olive oil to us in a carton and I transferred our wonderfully aromatic olive oil into a clean pear juice glass bottle repurposed for the occasion. 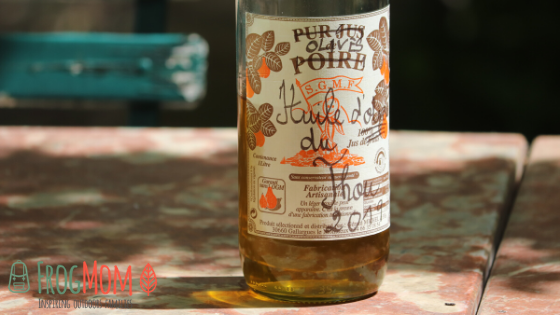 Using home-grown ingredients does make food extra special, I have to say. On that note, I combined dry and wet ingredients with a wooden spoon… 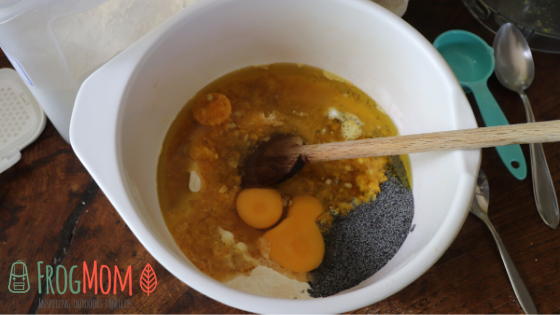 … before transferring the mixture to a baking paper-lined cake mould. 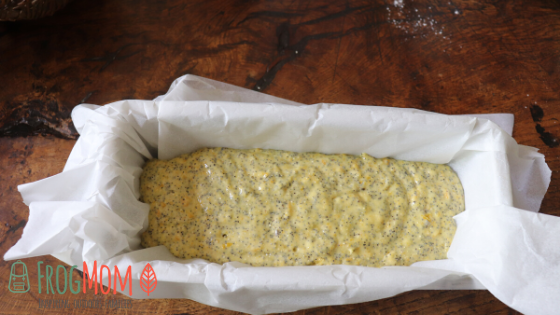 While it was baking, I prepared the orange syrup in a small saucepan. 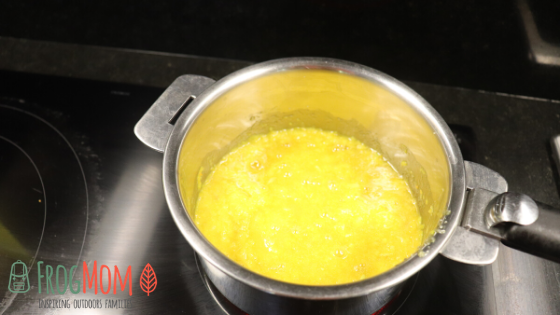 I kept the syrup hot up until the cake was out of the oven, which took slightly longer than I had anticipated as my dad’s oven overestimates temps. 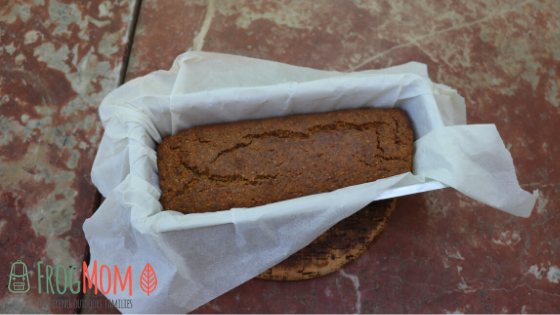 There, the cake was baked as confirmed by a toothpick inserted in the middle that came out dry. 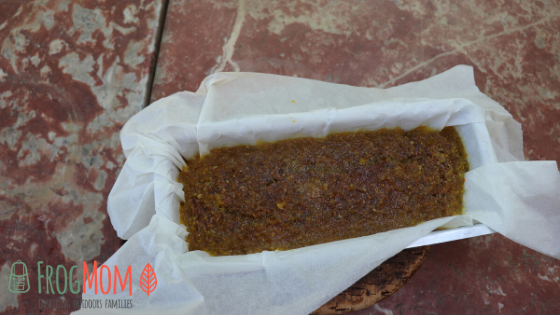 I poured the syrup on top (or rather, the glorified puree of sweetened orange and orange flower water) and instantly thought that I’d drowned it but I left it alone to cool off. The delicious syrup was absorbed by the cake and the orange zest formed a nice crust on top.