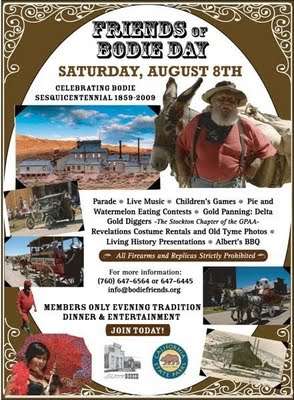 Feels like it’s 1859. Bodie, the largest unrestored ghost town in the USA, is blowing 150 c 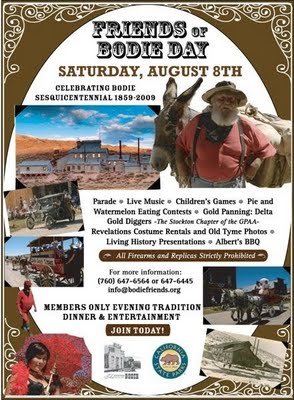 andles this Saturday August 8, 2009. It’s not everyday you can celebrate a 150th anniversary in California, so grab your camera, get in the car and cross the sierras!

As I write this, a severe storm is moving in from the Central Valley and some wild weather, including snow, is expected above 8500 feet today and tomorrow. Bodie is situated in the Basin Range east of the Eastern Sierras at 8,375 feet, between Mono Lake and Lake Tahoe – a perfect location for freaky weather. However, the storm will have moved out by late Friday and if you are lucky, you’ll snap a rare August shot of Bodie with snow patches.

On the Endangered Parks List Why go now to Bodie, why not wait til the fall? Sadly, Bodie State Historic Park is on the list of 100 parks that may close due to the California budget drama and the good or bad news will fall after Labor Day.

– some buildings that are usually closed will be open, such as the church or the fireho 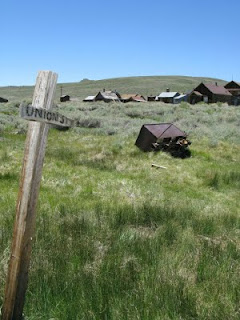 – Friends of Bodie members will be treated to a night of entertainment in the city after hours.

How cool is that? “We’re expecting 2,000 people,” says Terri Geissinger, director of the Friends of Bodie non-profit. Get there early to get a good parking spot!

A Walk Through History When we went to Bodie in July (right after my swim across Tenaya Lake), Bodie was buzzing with visitors and the temperature reached the mid 80s, making the sun nicely bearable. Indeed As you walk down the streets, city map in hand (get it, it’s worth it), the remains of Bodie’s troubled past unfold before your eyes. Gold was discovered here in 1859, ten years after the Gold Rush. The town boomed and thrived, boasting a population of 10,000 people by 1879. So wicked were the citizens of Bodie that a little girl whose family was taking her to the infamous and remote town, wrote in her diary: “Goodbye God, I’m going to Bodie.” The mine was up o 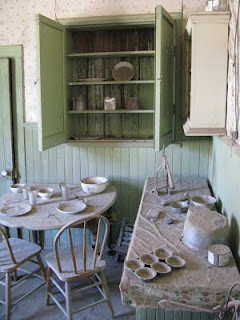 n the hill, a small gaping hole leading to a labyrinth of tunnels and shafts in the mountain. A riveting 65 saloons feasted on the miners’ hard knock lives, offered social relaxing opportunities – and late-night fights and murders. Why, this was a real Wild West town.

However a vein of gold only lasts for so long and by 1912, the last newspaper was printed. In 1942, the post office closed. Twenty years later, only 10 people still lived in Bodie and the vandalized town was declared a California State Park.

Arrested Decay Of a Ghost Town What you see today is a ghost town in a state of arrested decay (see Rae Somarsono’s Journey through Bodie photo gallery to judge of the place’s beauty), not a restored ghost town with a theme park flavor like Calico Ghost Town. W 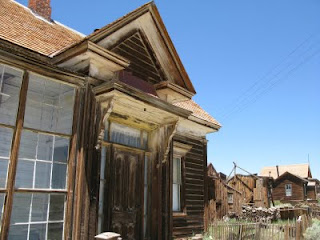 hen you peek inside the houses, furniture, wall coverings and lightings will be just as they were when the last inhabitants departed. If a family dragged their oven in the living room and it decided to do without, well it might very well still be there. If the cupboards were left open after a last bowl of oatmeal, it’ll be like the family left in a hurry … only 50 years ago. The thin dust layer that coats the homes’ interiors acts like a frame in time.

As we glued our faces to the windows of the 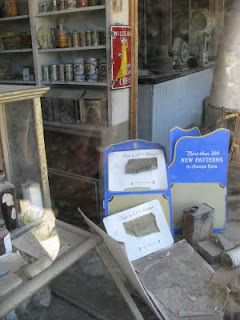 school, our girls were thrilled to count the little desks and tried to decipher the neat cursive hand writing on the blackboard. Tom Miller’s stable and icehouse bears witness to days gone by when ice would be cut off from local ponds during winter, and stored in sawdust to last through the summer.

Got Customers? The Boone Store & Warehouse’s shelves are still waiting for clients to decide on the right brand of biscuit (in period tin cans) or the right shoe shine. Across the street, under the porch of the Wheato 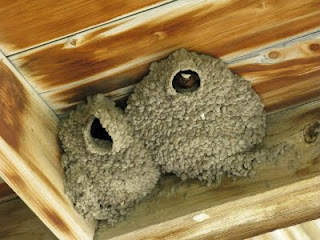 n & Hollis Hotel. are possibly the only inhabitants of Bodie: caked mud nests of sparrows with feathered mates peeping in and out of their holes. I could go on with a listing of jails, banks, carpenter shops, assay offices and other regulars of ghost towns. However to really take in the whole experience, you have to go there and stroll through the streets, trying to imagine life as it was.

Bodie in Books for Children One person who turned her creative 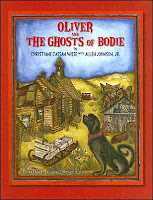 juices about life as it was in Bodie into a children’s book is Christiane Cassan Wiese. She co-authored Oliver and The Ghosts of Bodie with Allen Johnson, and illustrated it with her marvelous paintings. It’s the story of a dog lost at night in Bodie and two children looking for him, wandering into friendly and not-so-friendly ghosts and memories. When I read the part about both children climbing into a silvery shining stagecoach at night with a mysterious lady in black, my girls shivered and huddled together. Quite an adventure. If you do decide to become a Friend of Bodie and attend the evening party on Saturday, make sure you read the book ahead to get a flavo

r of Gold Rush days. For another Gold Rush children’s story on California ghost towns and how Redwood trees came to turn red, read Anne Isaacs’ The Ghosts of Luckless Gulch. It is a fantastic read for children ages 6 and above, with eternal winter in a gold mining town and ghosts stealing fantastic creatures from a running young girl to make them slave away in the mine. Plus, Anne Isaacs is a gifted storyteller who excels in threading feisty yarns around American tall tales.

Epilogue Now back to Bodie. In two days the party will be over. You can still visit the town on occasion, but you won’t get the costumed parade, the live music , or the costume rentals if you feel like dressing up. And if heaven forbid Arnold decides to close the city, you will have seen it in its arrested decaying splendor. There. Get the car keys. No public transit to Bodie.