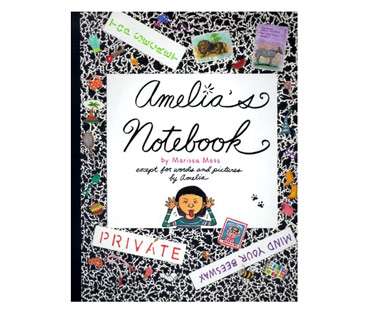 Do you have reluctant readers at home who would love to read a story about real kids written by a real person by hand on a hand-lined notebook? Marissa Moss’ Amelia series are pure genius and a big favorite in our household. The first book, Amelia’s Notebook, tells the story of young Amelia who moves to a new house, a new school and new friends.

Part graphic novel in look, all cheeky journal, the book appeals a lot to both to my 9-year-old and my 11-year-old daughters because it’s about a real girl who can be silly, candid, funny and always, fun. Amelia is a strong girl character and the truth is that they’d love her as a friend. She’s cool. They also like how unconventional the book looks, what with speech bubbles crawling up the page and sentences wrapped up in illustrations. Sometimes it’s a real jungle on the page!

Check out this page, describing the road trip to Amelia’s new house. It will give you an idea of how creative the inside of the book is. 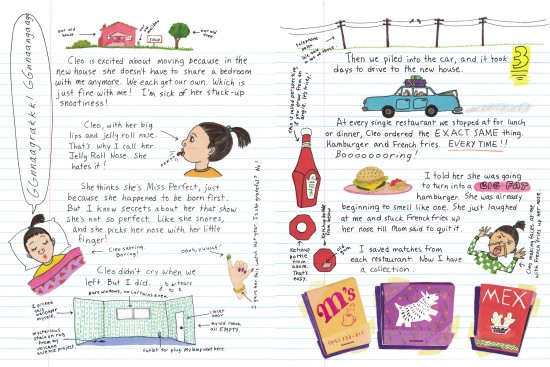 I was lucky enough to see Marissa Moss at the Burlingame Public Library when she talked about making this book. She wrote her manuscript on an actual school notebook and sent it as is to the publishers–where it totally hit the right note. Being a perfectionist, she decided that she would hand-line all other books so that they all looked like real school notebooks. She also hand wrote the story and this first book in the series talks about the time when Amelia was in elementary school. The subsequent books see Amelia grow up.

The books, initially published by Tricycle Press in the Bay Area, were so popular and provided such great role models for girls, that they were picked up by American Girl, to be published in the American Girl magazine and as american Girl books. How cool is that? Today the series counts 15 titles and has moved publishers again, but that doesn’t really matter for us. My girls still like Amelia’s Notebook best. It’s the first Amelia book they ever read and it stuck with them as the story of a little girl they’d love as a friend.

We also have in our book shelves The Science Fair Disaster, Amelia’s Itchy-Twitchy, Lovey-Dovey Summer at Camp Mosquito and Amelia’s Cross-My-Heart, Hope-To-Die Guide To The Real, True You! (the latter was a gift from a real-life Amelia to my oldest). All are great books and my girls would recommend any of them.

The great thing about Amelia books is that you can find one for any age in elementary or middle school, as well as common sticky situations such as family reunions, school bullies, rainy days boredom and embarrassing moments. This is another page to show you how fun these books are. 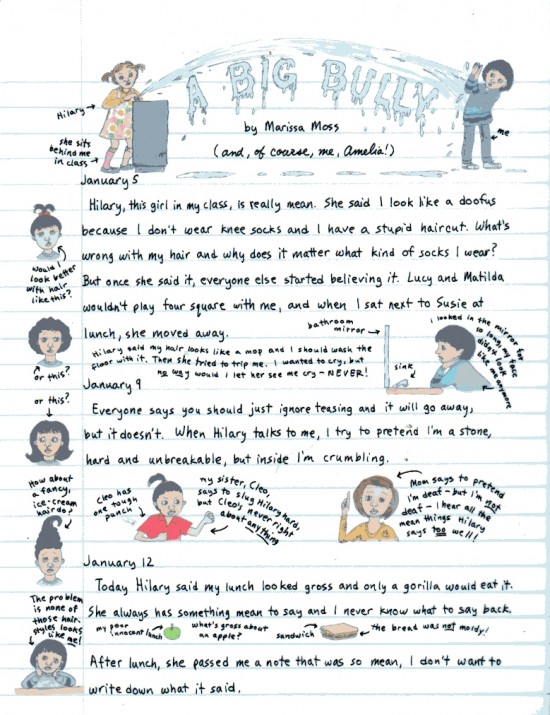 How could kids not relate to that? I know that my girls are begging me to get the rest of the series and I have a hunch that it’s because they find themselves in the young Amelia. In a way, Amelia is their imaginary friend.

Get these books, they’re really fun and if you want to be as unconventional as young Amelia, get them from indie book stores:)