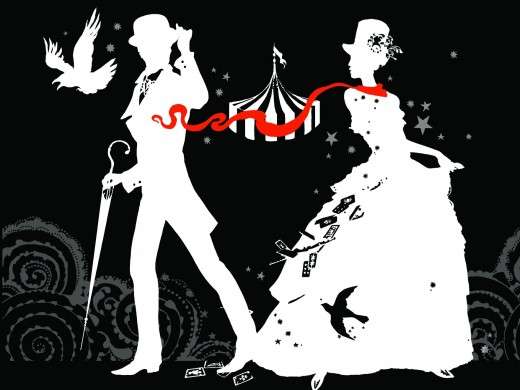 Prepare to dream with your eyes open. I recently heard the term “book hangover” and that’s exactly how I would describe the dreamy state that stuck with my brain after I finished this book. Erin Morgenstern’s The Night Circus takes you places so surreal, poetic and wonderfully visual that when the book ends on its final chapter, you wish you could hop on the next magic train and join the crowds of circus dreamers – if only for a night. Escaping from reality is a wonderful way to replenish your soul and the time of a book, you can do just that. Dream away, dream because this book is a great read.

The circus arrives without warning. No announcements precede it. It is simply there, when yesterday it was not.

These sentences are the first ones in the book and pretty much set the tone of the story. While the reader can speculate on a number of plot twists, most simply arrive without warning. Take the book’s premise. In late 19th century Europe, two rival magicians wager that their pupil can best the other’s student at magic. What’s peculiar about this competition is that the students themselves are not even aware of the wager until late in the story. What’s cruel about their fate is that they’re blood-bound to the wager and can’t escape it on their own free will. What’s unsettling is that the bet has no time limits, no rules. What’s beautiful about the fight is the creation, for that purpose, of the night circus.

And that night circus is where all the fun and tragedy occurs. This circus of the traveling kind is on its own schedule, unlike most circuses. It’s also bound by magic bigger than the performers and as such, the backdrop for some particularly enchanting scenes. You have to think of the circus as an enclosed area with a series of tents offering experiences that range from the extremely gifted contortionist to the Harry Potter-ish Bedtime Stories tent with bottled-up stories or the wonderful “landscape” tents like the Ice Garden tent where the visitor enters an always-changing blooming garden of ice. The elaborate clock that hangs above Le Cirque des Rêves is the stuff that would make a lifetime oeuvre d’art for Renaissance clock masters.

In all fairness if such a circus existed, I’d be the first to visit. The idea that you can walk through a circus and experience its many wonders without having to sit through yet another clown or tamed animal really appeals to me. Given the popularity of the book and the fact that it’s being made into a major movie this year, I know I’m not the only one.

And then, there’s the romance aspect. In true Victorian fashion, the star-crossed lovers are faced with this impossible paradigm that one of them will die whatever they do and however much they love each other. Talk about a challenge – as if these sacrificed magicians needed a heavier burden to bear than a life they didn’t chose. Being a prestigious magician never seemed so glamorous and unfair.

If I needed to classify The Night Circus , it would be steampunk Victorian meets a dash of Goth meets romance as an excuse for unbelievable feats of dark and white magic. It flows in the same vein as The Prestige, a movie about two magicians of the late Victorian era fighting to perform the ultimate illusion. Highly visual, this is story to make you dream and forget reality. Just like the protagonists themselves live in a virtual world that they’ve created yet cannot control.

Let yourself be carried away by The Night Circus. It’s a quick read but it’s one that’s highly enjoyable.