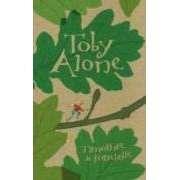 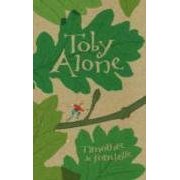 Tobie Lolness is finally out in US bookstores under the title Toby Alone. Yeepee! Since I read this wonderful tale of nature and man-hunt last summer, I couldn’t wait for it to be translated into English so I could share it with my friends. Think about it: what if your world was narrowed down to a branch and you grew up on that branch and you couldn’t see the big picture which is the tree? “Tobie Lolness was one and a half millimeter high which was not tall at his age” is the first sentence of the book.

Although the book is primarily meant for tweens, it addresses universal themes (justice, environment, love) that everybody can relate with and I simply adored the story. Before I turned the second page over I was hooked and shortly after, I ordered the second book online from France so I’d be able to follow the story without interruption. I was not disappointed and after I read the last words, I would have wanted that imaginary world to exist forever.

I talked about the book to the librarians at the San Francisco Public Library and they told me they knew nothing about it. I wrote to Gallimard (the French publishing house) and found out it was going to be translated into English. Then I waited patiently. Walker Books finally released it in the US in April 2008. Has anyone even noticed? This book so deserves to be read.

I like that Timothee de Fombelle the author, has named the heroin for his little girl Elisha. I like that you can read the story on a literal level as an heroic epic story and at a deeper level as a fable on urban sprawl and eco-disasters. I like that both girls and boys will be able to identify with the two main characters of the story. I like the nitty-gritty details about tree pests and worms and diseases. I like how the book opened my eyes on the life cycle of trees and altruism in the world.

If 10% of children’s books were written with such passion and research, I’d hand over the world to the next generation with my eyes closed. Bravo Mr. de Fombelle and thank you for this magical tale!