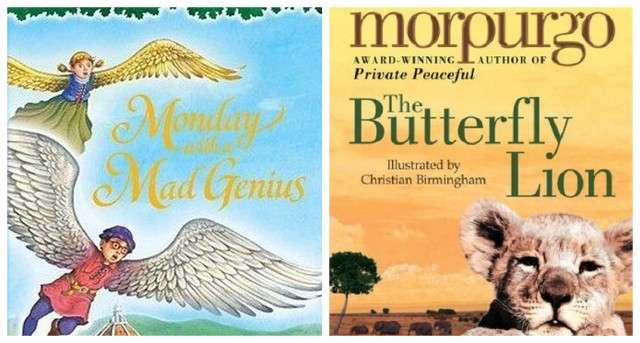 > Books My Girls Are Reading: Monday With A Mad Genius and The Butterfly Lion

Books My Girls Are Reading: Monday With A Mad Genius and The Butterfly Lion

Books My Girls Are Reading is a short column in the weekly Frog Mom newsletter that tells readers exactly what my girls are reading right now. It’s not long, it’s more like a bedtime read update. It features a book per girl, though my 9-year old is such a voracious reader that she occasionally gets more. This particular column was published in the Frog Mom newsletter on January 25, 2013.

For my 7-year old: Monday with A Mad Genius (Magic Treehouse #38)

My 7-year old finally discovered The Magic Tree House! It was about time. Her older sister’s boxed collection was gathering dust on her bookshelves and really needed a young pair of eyes to jump to life. She started with #38, the book about Leonardo Da Vinci and discovered that  a number of research guides (non-fiction books) accompanied the fiction books. She’s a wholesome girl. Why stop at the story when you could know the truth? And thus she now wants ALL the non-fiction books because she feels like she’s missing out on half the fun. We’ll see what Santa has to say about that. In the meantime, she’s reading the first 40 books.

For my 9-year old – The Butterfly Lion

This story of a friendship between a young boy and a white lion clearly struck a chord with my 9-year old who read it in class and then proceeded to tell me the entire story, chapter by chapter, in a single bedtime sitting. She was so amazed that the boy grew into a man who never forgot a lion and found as an adult the wild animal he’d met as a boy, the look on her face was priceless. And then there’s a boarding school, a circus, Africa and France – elements that make the mind travel. Mixing fantasy (there’s a ghost), adventure and period details (early 1900s), it’s a great book with quality writing. The exciting news? We’re going to see Michael Morpurgo in person in two weeks, he’s reading from one of his other books. Yay! If the name Michael Morpurgo doesn’t ring a bell, one of his adapted into a play and a Steven Spielberg movie will: War Horse.