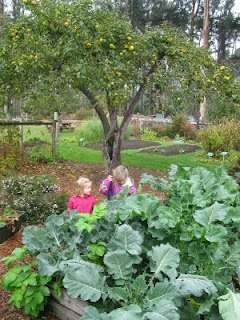 Inclement weather can influence many a well crafted plan. Last weekend we visited Boonville (our third time in 2008) heart of the Anderson Valley, three hours north of San Francisco west of the Sonoma Valley.

The sole purpose of our visit was to stay at the Boonville Hotel, a remodeled 1900s establishment praised by Sunset Magazine and others. 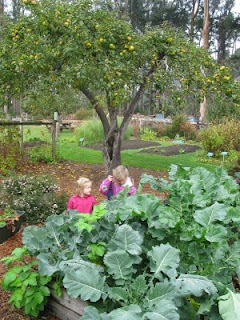 On our two previous camping trips in Anderson Valley, wine touring and the county fair and rodeo had kept us busy.

This time, our hiking endeavors were literally drowned by the weather. Rather than inflicting more boring wine tasting stops to our poor girls, we headed for the coast.

The road is windy for many stretches so we reached Fort Bragg – only 49 miles away – in roughly 1h20 minutes.

Our first stop was at the Mendocino Coast Botanical Gardens, a former nursery created in 1961 that displays wonderful heathers, roses and rhododendrons, as well as other plants. The biggest advantage of the gardens is that they sit directly on the Pacific Ocean, offering visitors an opportunity to combine a passion for horticulture, gentle strolling, bird watching and even whale spotting for binocular-holders.

Thanks to the mild and wet climate, the gardens offer all shades of green in non-blooming seasons like late fall. As we arrived under heavy clouds, we borrowed an umbrella at the front desk and hit the trail.

The gardens now offer a “follow Quincy the quail” kid route that takes you to the main spots of interest in the garden through clues and asks junior naturalists to exercise their senses at various landmarks.

When our girls learned that there was a fairy garden on the way, they doubled the pace until we got there. Right after the neatly-tended vegetable garden, 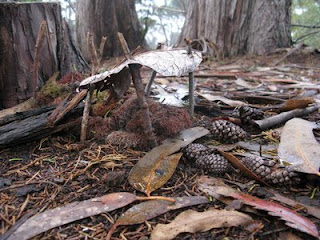 The fairy garden is not a glitter-pastel-Disney fairy garden (as I half expected). It is an actual enclosure made of broken branches and twigs where children can pick up anything on the ground to build a fairy house.

The gardeners probably got the idea from one of the books they sell at the store, Fairy Houses…Everywhere by Barry and Tracy Kane. Whereas the book features top notch photographs of whimsical fairy houses, the ones that surrounded us definitely veered on the rustic DIY side. However, pixie dust was in the air and despite the lack of glitter around us, our girls got really involved in the building activity.

Half an hour later we ended up with a nice nook on a tree stump with bark roof, leaf fence and acorn furniture. Classy.

I love the idea of returning fairies where they belong to an all-natural environment rather than in rosy flowers jingling like crazy in PC-bimbo-style Tinkerbell. 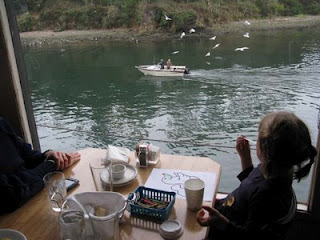 As if fairies needed an official web site… Nearing lunch time, our growling stomachs hurdled us back to the exit.

On the way, we met a charming dog-walking couple who recommended that we eat at Silver’s on the wharf. The real name is actually Silver’s at the Wharf and this has got to be one of the few coastal restaurants whose main view consists of giant pillars of a tall concrete bridge.

Granted, water runs underneath the bridge and it leads to the ocean. It’d be unfair to complain though. We had a bridge/ocean view table. Sipping an Amber Ale beer, my husband and I spent a lot of time detailing boats coming back from fishing expeditions, pointing out throngs of flying seagulls as signs of successful outings.

At one point, we even got treated to a seal swimming underneath our eyes and the children loved it. The food was not fancy but the fish tacos and fried cod plate worked wonders on hungry stomachs (they even came with real vegetables and perfectly edible rice).

As we got into the car, it started 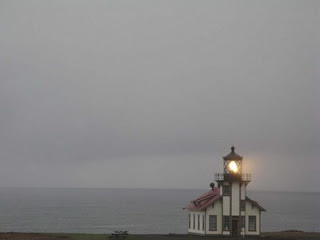 pouring cats and dogs. We decided to stop in Mendocino for a cup of tea/coffee.

Had it not been for a small sign on Highway 1, I would never have turned right to see the Point Cabrillo Light Station. What a lovely place and what a hidden gem! We parked by the visitor center and hiked the half mile to the light station buildings at a brisk pace. Rain – which had stopped minutes before- resumed and we opened the girls’ umbrellas.

As we arrived next to a bunch of buildings, more rain forced us inside the Lighthouse Keeper’s Museum. It is a darling little house that has been restored to its 1909 authenticity down to the gramophone, kids play kitchens and building blocks. We pretend played a lot, looked out occasionally and waited for dryer clouds.

As it kept raining and we still hadn’t reached the inside of the lighthouse (few hundred yards away), 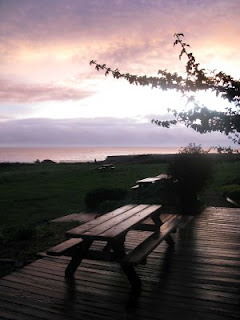 we made a run for the house next door. It had lights and I assumed it was the docent lounge and shop.

What a surprise when we were gently shooed away because it’s a B&B. A B&B in a state park? Yes, the Point Cabrillo Lighthouse Inn is a unique Bed and Breakfast in that it finances the daily operations of the entire park.

With only 60,000 visitors a year, the lighthouse has nowhere near enough trafic to pay for the costs of repainting the buildings washed by salty waves, maintain the lighthouse lens or more lighthouse business. However, we’re not going to sleep there anytime soon. It’s off limits to children under 15. Ahem, that’s pretty steep.

Before the sun set behind the golden horizon, we stopped in Mendocino for a cup of espresso, green tea and hot milk. Our dinner reservation in the dining room of the Boonville Hotel was not til 8.30pm so we enjoyed the last half hour of the local toy store, a magical place for tired children who want to play castles and fairies with the real plastic stuff.

Boonville, gateway to the north coast. Who would have known?