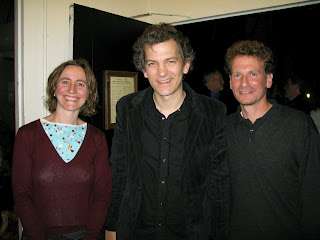 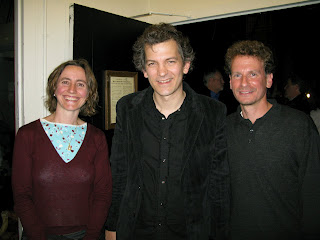 On June 6, 2008, the Brad Mehldau Trio played for the SF Jazz Festival at the Herbst Theatre. I was there with my friend Sue, childhood friend of the bass player Larry Grenadier. I’ll be honest, I’m not a jazz fan. I was not even a Brad Mehldau (with or without trio) fan. I’m a fan of Nick Cave, Nine Inch Nails and Marylin Manson. My only previous appearance at the SF Jazz Festival was for the Swedish piano trio E.S.T. five years ago and I fell asleep. Bad jazz record.

However, I have to say that listening to Brad Mehldau yesterday was one of the best musical experiences I’ve had in a long time. Not just listening but watching. Such feline movements on the keys, such hands independence, such a dynamic yet dreamlike touch, it was incredible. It was deep and moving, often entrancing with deceptively simple harmonies and perfectly coordinated bass and drums. It opened up new doors and I discovered how much I’d missed on. I let my mind wander away as I once did on Keith Jarrett’s Koln Concert or some of Pat Metheny’s music. Clearly, it was time to catch up on the new face of jazz! 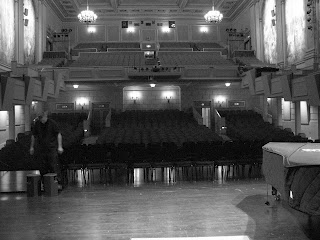 ith jazz concerts is that there’s no program. It’s jazz. Freedom and improv. So thanks Brad for announcing the song titles as time flew by, but how can I find out about all the songs played? It’s annoying when you love a melody and you would like to listen to it again but you’re a jazz ignorant and you don’t connect the dots.

Guess I should have been taking notes. Or I could wait until a new album comes out. Or I could write to Congress to vote mandatory programs at jazz concerts. The options are plentiful really.

After the concert, we joined the trio and their close group for drinks at Jardiniere. I had a great time discussing with Brad. Being a mediocre pianist myself, I certainly appreciate good piano. In Brad’s case, one of today’s most impressive and influential jazz piano there is. Even more, I love discussing about piano and music.

Brad told me about his daily morning Bach practice, his love for Brahms, his admiration for Messiaen, Chopin’s innovation. I didn’t realize that a jazz pianist could spend his days playing classical piano and somewhere it’s comforting.

It’s as comforting as knowing that Picasso could get to cubism after being an accomplished figurative painter, art form which he favored for his daily practice. It’s as comforting as learning that Mondrian made his way to abstraction after years of stunning impressionist landscapes. So Brad Mehldau not only loves and plays classical music, but he writes about it.

An unlikely topic we shared experiences about was Holland. His wife Fleurine is Dutch and he of course knows a lot about Holland. Since I’ve had a very close Dutch friend in Bangkok, attempted to learn Dutch (can only read slowly) and spent a summer in Amsterdam, I have a weakness for things Dutch. Or rather, a piqued interest. So continued the conversation on Holland, broadened to Europe and back to music festivals.

But for all of Brad’s incredible musical gift, for all the amazing places he visits, all of the famous musicians he plays with, I wouldn’t trade my life with his. Yesterday San Francisco, today Los Angeles, tomorrow somewhere else. Unusual life but what a concert it was. Now I really wish there was a program.