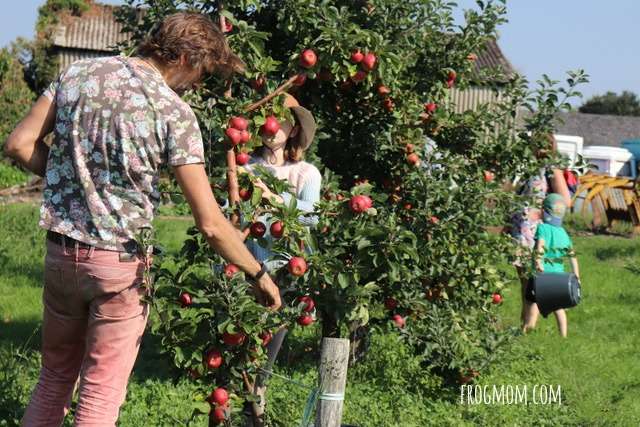 > Broomfield Apple Farm: A London Day Out by Train

Broomfield Apple Farm: A London Day Out by Train

In my blog post Pick Your Own Apple Farms Near London, I start with Broomfield Apple Farm in Kent, one of the first apple farms we visited around London. It was quaint, small and family-owned, a definite plus when I look for apple farms. This year, I decided to visit Broomfield Farm very early in the season, during their first “apple” weekend in September. Since my last visit, the farmers have changed but the farm is still great – if not better, in fact. 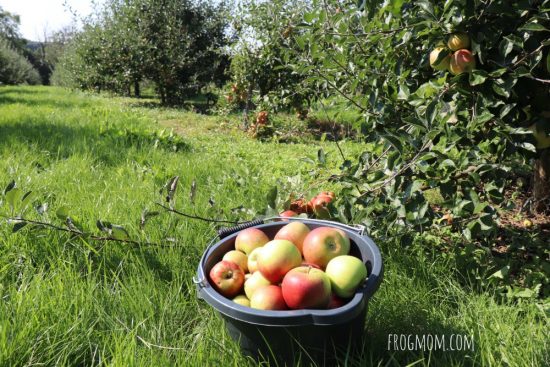 How to Get There Without a Car

Living in London, I really don’t see the point of a car and when we go on family days out, we try to take the train as it’s the most relaxing way to travel. Fortunately, Broomfield Apple Farm (their real name is Broomfield Farm, I’m only adding ‘Apple” in there because that’s my pet peeve) is located in Kent, only 2.2 miles from a train station so we decided to walk the 45 minutes it would take to reach the farm.

We hopped on the train at Victoria Station, read books all the way to Meopham, and got off at Meopham. It took roughly 30 minutes to get from busy downtown London to the countryside. Magic.

From the train station, we walked straight on the footpath along the road until we reached this sign.

We came for apples, but Broomfield Farm had a lot more in store. 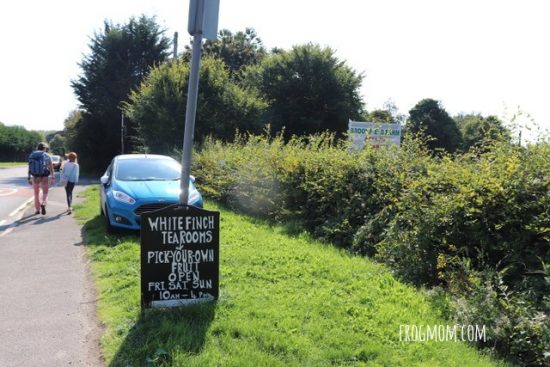 Broomfield Farm has partnered with a tea room called White Finch Tearooms. It is absolutely adorable and I’ll talk about them later.

Arriving at the main table at the farm, we asked if we could leave our bulky backpacks with the two women there and they said yes. Hurrah to walking light when picking apples! We grabbed two big buckets with handles as well as cartons. The sign mentioned that we could find blackcurrants and we didn’t want to miss that. 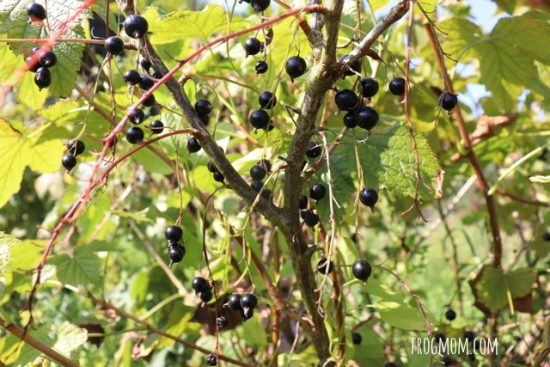 Blackcurrants are small sour berries that grow in clusters on small bushes. On the scale of sour, they are right up there with Sour Nerds. Luckily, picking them is fairly easy as you just pinch the tape of the stem with two fingers and gently slide down the stem. All ripe blackcurrants will fall directly in your carton. Now, I’m not necessarily a huge fan of blackcurrants but they are a really rare fruit to come by, so there’s that. I guess they’re not easy to grow or the demand is very limited.

The kicker is that my husband loves them. It’s his favorite fruit. So we spent the first 20 minutes of our apple expedition in the blackcurrant section. When we had filled two cartons, I took them back to the counter as I didn’t want to risk squishing them with apples.

Do you know what I spotted on the way?

A field full of plump orange pumpkins ready to pick. 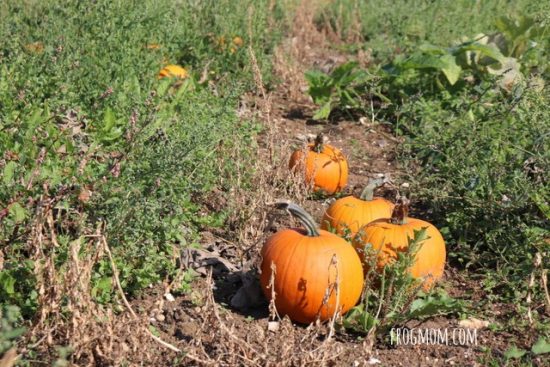 Hold on, you’ll say, can we get to the apples already?

The thing is, I love pumpkins too so I picked a nice round pumpkin and left it with the blackcurrants so we could grab everything together on the way out. Becky, the new farmer, told me that with her husband David, they had planted three varieties of pumpkins for Halloween.

One of them will be white outside and orange inside. I think it’s called White Ghost but don’t quote me on the variety. 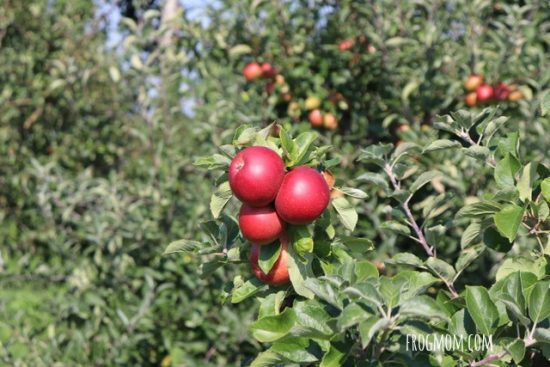 They have Laxtons Fortune, Windsor and Worcester. Also some Discovery’s. Without signs, we weren’t sure which apples we were picking but we went for the obvious Snow White apples: red (sun-facing), firm, coming off the branch easily. Some apples were more green, some were more red, but all were really nice and had few blemishes or bug holes. 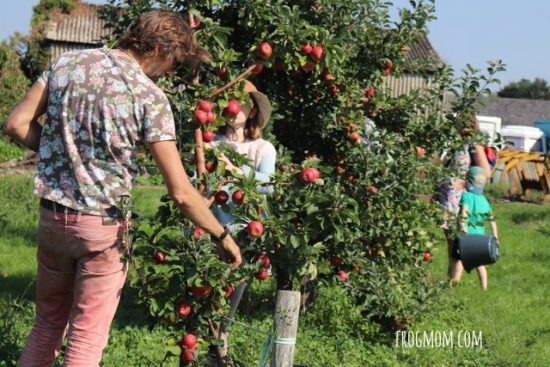 Other families were picking apples too but with the abundance of trees and fruit, we were spoiled for choice. We could not even have picked a whole apple tree if we had wanted to. There were so many apples!

Once we’d gone through the rows of Bramley apple trees and filled a bucket with eating apples, another with cooking apples, we headed to the farm stand to weigh our autumn harvest.

2019 Update: we returned in early September and the weighing is now done inside the building that houses the tea room. 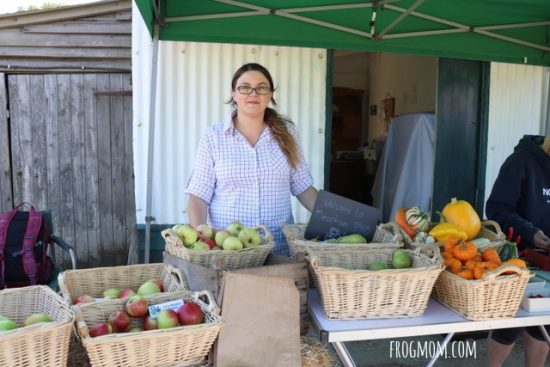 Becky, here on the picture, stands in front of the wonderful ready-to-buy produce they have at the farm. Our own harvest was more humble. 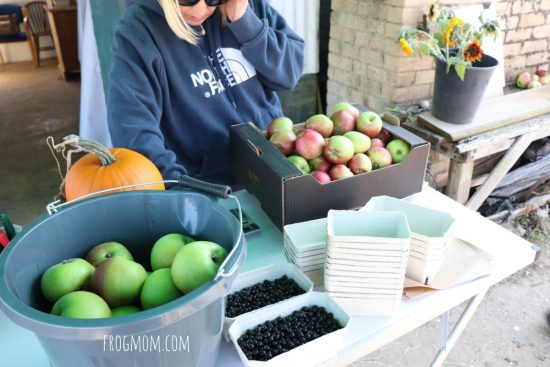 1 bucket of Bramley apples (for applesauce)

1 bucket of eating apples (for apple crisps, pancakes and more)

All for a royal total of £20 or thereabouts. Can you believe it? It was so cheap, compared to what we pay in London and we knew exactly where the apples came from. Exciting.

After picking our own apples, we stopped at White Finch Tearooms and enjoyed tea and cakes served with mismatched china worthy of Alice in Wonderland. 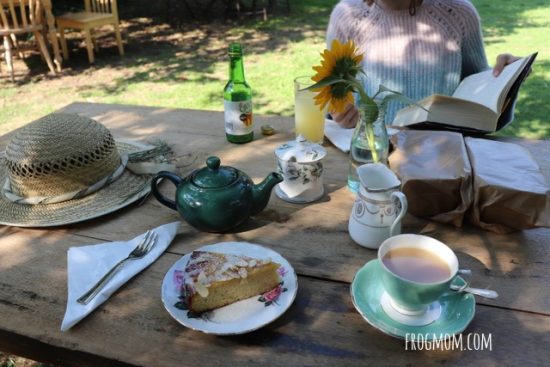 We sat under ancient apple trees, ate almond and lemon cakes and took a well-deserved break before walking back to the train station.

2019 update: White Finch Tea Room is how housed in a permanent building with picnic tables right off the parking lot. It doesn’t have the same charm as tables under apple trees but the cakes are still delish.

That evening, we made an apple blackcurrant crumble following a recipe from Chez Panisse. 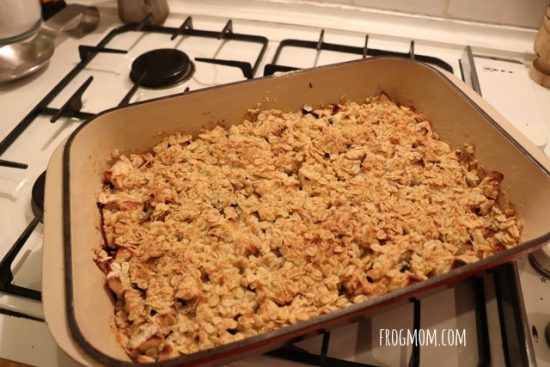 It was so good! The following day, we made an upside-down apple maple and walnut cake (recipe here). As you see, we love cakes!

How to Find Broomfield Farm

After I failed to contact Broomfield Farm by phone (poor phone reception on the farm), I contacted them by email (hello@meophampyo.co.uk) and they got back to me within minutes. So efficient.

Alternatively, they are very active on their Facebook page as Meopham PYO.

2 thoughts on “Broomfield Apple Farm: A London Day Out by Train”