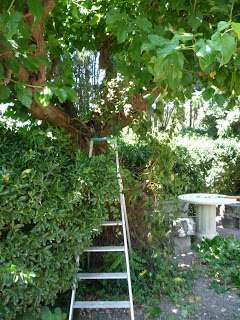 What child hasn’t dreamed of a tree house to watch the stars and gaze at the world up high?

At our house in Beziers there was a tree on my mind, a tree that would be just perfect for the job: neither too high nor too low, wide space in the center and virtually overlooking our house so that the children could watch and be watched at the same time.

As soon as I shared my ambitions with my father, he blurted out “No way! It’s too complicated.” That’s the only encouragement I needed.

Fortunately my sister-in-law Marine is more a Bob-the-Builder type and with a Yes-we-can attitude, both of us got in the starting blocks.

I went up the ladder with a small saw to remove unwanted branches, Marine grabbed a pencil and measuring tape.

Seeing we were undeterred and his tree was losing feathers, my father reluctantly joined in. The tree house was on the go.

In our shed, old wooden boards and posts were sitting idly waiting for a new life. Soon, my father was sweating over a bigger saw, Marine was tying sailing knots around the posts and I was in the tree adjusting the elements.

The idea was basically to build a platform, anchor it to the tree with nails and ropes, level everything, then cut boards to the right size, hammer them in, nail some more, then build surrounding guards.

I insisted on installing a pulley to lift up a basket and that happened to become the main attraction for my girls.

Next, preventing a fall was essential but tricky as the platform was roughly 10 feet above ground. Initially we planned to nail small sticks to make a terrace but the post guards were way thick and we ran short of nails.

Marine’s sailing experience then inspired me. How about a good security net, the kind used at playgrounds that can hold up to ten screaming children? The next day I drove to Sete with my father-in-law Patrick and we found an old fisherman’s shed by the port.

The guy had been fishing sardines and mackerels all his life. Now he repaired and traded nets of all shapes and sizes. The piece I ended up buying was part of a 300-feet piece ordered to wrap a fisherman’s house as a memoria l to his father and brother lost at sea. The distraught fisherman never showed up and I got a share of his net.

In the meantime my brother Lionel had arrived from Paris and together we went up on the platform and busied ourselves tying the net as tight as we could, careful not to leave gaps for adventurous little feet throughout.

The last item on the agenda was getting the girls up there. We could have bought a wooden ladder just the right height but I didn’t want my 3-year-old to climb and be stuck in the middle.

To make things too challenging for her until she’d have the skills, I just hung a rope ladder. My almost 5-year-old can barely manage it but with a little practice, she now uses it like a monkey.

That day at noon while we were sipping aperitifs under the trees came the reward. As both girls were safely sitting in their tree house, we used the basket to make salami slices and fresh goat cheese travel up the tree.

The tree house is now officially open and all it needs is a wooden sign with a name. La Maison du Murier sounds just right. Mulberry tree means murier in French.

2 thoughts on “Building a Tree House: The Mulberry Tree House”