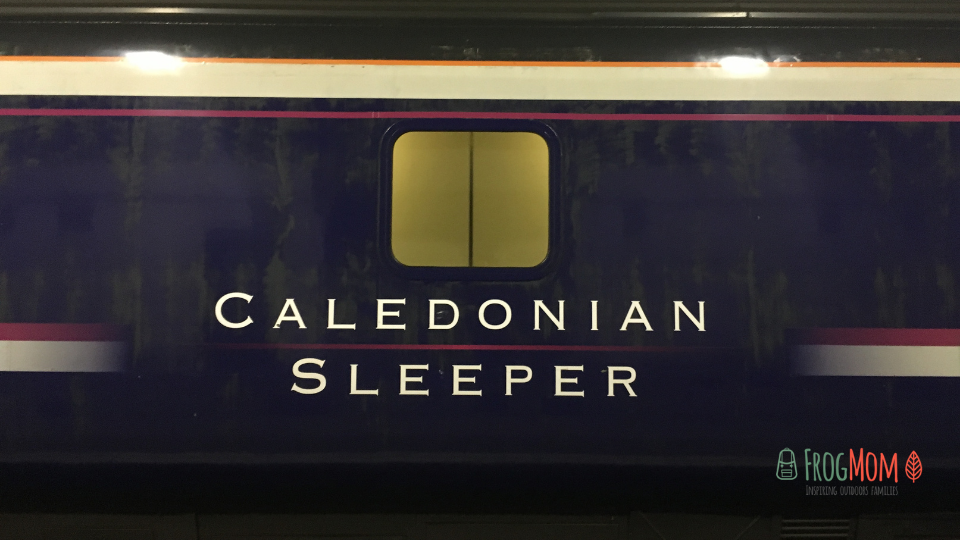 > Caledonian Sleeper: Aboard the Night Train to Scotland

Caledonian Sleeper: Aboard the Night Train to Scotland

How do you get to Scotland without flying or driving? The Caledonian Sleeper, aka the night train to Scotland, is the answer to your travel questions.

Why I Love the Caledonian Sleeper

For my family, the Caledonian Sleeper is the best way to enjoy a weekend (or longer) outdoors in Scotland. Imagine leaving after school or work on Friday night and returning on Monday morning after a weekend of hiking and wild camping.

From Euston train station, the Caledonian Sleeper departs London at 11.50pm and reaches Edinburgh or Glasgow for breakfast around 7am.

Going as a family, it’s quite the adventure. Everybody stays up late until boarding time, brushes their teeth in the sink below the tablet, sleeps on the train, listening to the wheel sounds on the tracks and best of all, wakes up in the land of tartan and kilts. It’s so exciting!

We’ve done it a dozen times and I wouldn’t travel to Scotland otherwise (unless priced out). I love the convenience of it all and as a night on the train saves on a hotel night, it becomes affordable if I can book early with family discount cards.

Here is what you can expect, in the words of my (then-10-year-old) daughter.

Getting To Euston Train Station

For kids, the train to Edinburgh is super late and keeping them awake is not always easy. Trains to other train stations that are much further leave earlier, so it’s easier. However, it is really fun to sleep on a train, wake up in the morning and see that you have arrived at destination in Scotland.

If you wake up early enough, which is highly unlikely because the train reaches the station at 7am and that’s already early, you can look out the window and see the beautiful landscapes passing by and even the sunrise.

When we got to the train station, we looked on the departures board and found that it was leaving from Platform 14. Once on the platform, we found a train assistant (it’s like a flight assistant except for trains) who told us where we would sleep.

In the second class cabins, there are two beds but…

… if you go in first class, they don’t put down the top bed and you have a cabin to yourself.

With a family of four, they can connect the cabins by opening the middle door, that way you can keep an eye on your grown-ups.

My first reaction when I boarded the train was that the cabin was really clean, not too big and convenient. There’s a place to put your luggage at the top of the cabin against the outside wall. The sink was under a panel close to my bed and I left it down for the night after brushing my teeth, that way I could put my things on it.

In second class, my sister slept on the bed below me and they added a ladder so that I could get in and out of bed more easily.

In second class, the welcome package included a small towel, a square soap and ear plugs.

In first class, you get a little welcome package on your bed with everything you need for the night, except your toothbrush and toothpaste! It has a small face/hand cloth, liquid soap, hand cream, ear plugs, eye sleeping mask and pillow spray (my sister’s favorite).

Lights! There are several types of lights in the cabin. There’s a main light on the ceiling, a night light above the connecting door, a berth light (to read in bed) and you can dim the main light with a switch to turn it into a night light. So many options!

Sleeping on the Caledonian Sleeper

When I got into bed, I realized that it was pretty narrow, even though I am the smallest of the family. I fell asleep after the train left the station. The noise wasn’t very loud and I liked the rocking that the movement of the train made.

At night, everything was calm as everyone wanted to sleep.

The following morning, we were woken up pretty early with a knock on the door and (in first class), breakfast or (in second class), tea or juice.

You sleep on the train but sometimes it is hard to wake up.

The first time we took the train, we woke up even earlier because of works on the train tracks. I was so sleepy!

Passing through the Scottish Highlands

Another time, we took the train to Fort Williams in the Scottish Highlands to visit the Isle of Iona. The train left Euston station much earlier and arrived at Fort Williams much later, which meant we had a full night’s sleep on the train and were treated to this view by breakfast time.

And just minutes later, it was a gorgeous valley right out of a movie scene.

Isn’t it so gorgeous?