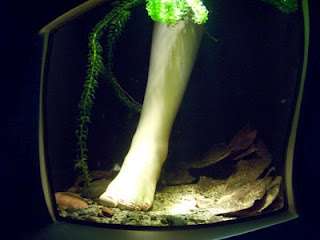 > California Academy of Sciences: The Green, The Odd and The Beautiful

California Academy of Sciences: The Green, The Odd and The Beautiful

Almost a month after it opened, the California Academy of Sciences continues to keep the buzz alive around the world. From Vanity Fair to Sunset Magazine, from BBC News to the New York Times, there aren’t enough words to praise the green example set 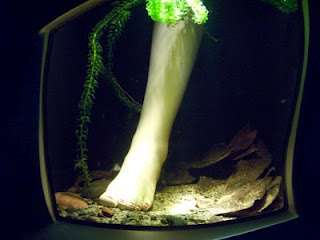 by the building and its designers.

Rarely has a venerable scientific institution been this much fun and worthy of travel articles. When I visited the building a month ago to research an article for SFKids.org, I discovered the aquarium in all its silver blue waves and musical glory.

Picture this: 2,000 fish, 350 species and coral reefs modelled after actual dive sites in the Philippines. The giant waves lining the walls with smaller tanks heightened the experience of aquatic life thriving within. Only the surrounding lounge music seemed slightly off, if somewhat distracting.

The small tank on the picture got my attention because human feet are not staples of aquariums but then this is a novel way to introduce the life of fungi underwater.

Climbing up three flights of stairs, the highlight of the building is its green living roof with seven hills, thousands of 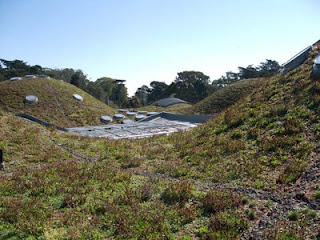 photovoltaic cells and coconut husk trays to root down native species, the latter aiming at capturing rainwater to irrigate the roof, the rest being drained outside for ground re-absorption.

This spectacular and organic design was created by the Italian architect Renzo Piano who got inspired by the view of Grand View Park in the distance.

However the contents of the exhibits beneath are equally fascinating. In true scientific tradition, they are mostly thought-provoking with public education in mind. Right under an 87-foot long blue whale skeleton, the exhibit on climate change in California is frightening at best, terrorizing for green eco-conscious minds like me.

As our presentator said, “What you chose for breakfast, lunch and dinner actually makes a difference [on climate change.]” Since then, I’ve actually reduced my meat 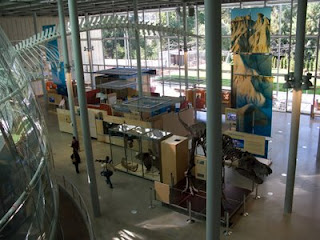 It’s a thorough multi-level analysis of climate change in the sierras and its ski resorts with impact studies on natural habitats and the fauna. For curious minds, the exhibit also clarifies the mystery of fog formation on the bay, something tourists couldn’t live without.

To brighten up spirits, the giant Amazonian bubble is next door thriving with lifeforms of all sizes both above and under water.

Chris Andrews, Chief of Programs at the Academy, led us through the exhibit explaining how the noise level inside the rainforest depends on the time of the day. Obviously we were at bird- 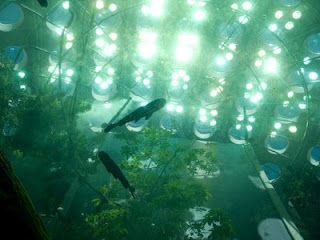 chirping max with 40 specimens of birds flying around.

The exit of the rainforest bubble includes a double-cubicle with heavy rubber curtains aimed at keeping Amazonian life indoors. “Don’t let butterflies fly out on your shoulders,” we were told.

At the opposite end of the hall, the Islands of Evolution panels nail down Darwinist revisionists’ theories with factual evidence around various animals and birds from the Galapagos Islands, and how some species have adapted to evolving habitats.

Towering above bird beaks of various shapes is the Planetarium, a hi-tech facilitity offering live space feed from NASA satellites.

The current show on the quest for life in space, narrated by Sigourney Weaver, is definitely more thrilling than Disney’s Soarin’ Over California ride.

As you sit comfortably in your plush seat, the screen shows you an uber-realistic view of the building around you through the walls. Then the camera takes off to fly above the Golden Gate Park, the Bay Area coast and then off to 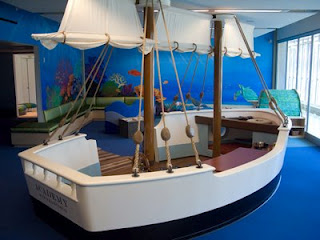 space.
For a few seconds I actually hung on to my seat. However as the step-by-step quest for life in close and more remote planets or systems unfolded, I entirely dove into the narrative. It’s better than science fiction.

Last stop in my tour was the kids space or Young Explorers Cove. It was closed that day but I got in thanks to a member of staff who had the key.

It’s a cute little space but slightly hidden from plain view and I don’t know how it fares with hundreds of kids mercilessly playing with the toys each day. I found the schooner miniature replica disapppointing as I envisioned an ambitious half-size boat like the one at Lookout Cove at the Bay Area Discovery Museum. But hey, it’s a good option for preschoolers nonetheless.

Can’t wait for Friday. This Friday, the California Academy of Sciences unveils Maya Lin’s “Where the Land Meets the Sea”, a monumental installation depicting the Bay Area below and above sea level.