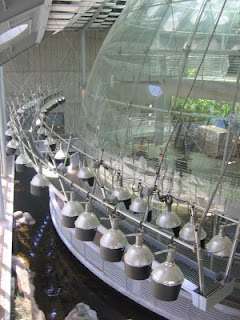 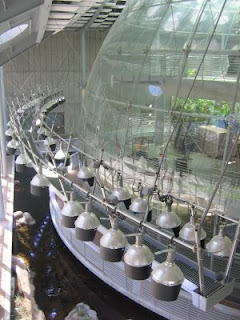 Hail to the Golden Gate Park and its revamped museum concourse! The man-made green lung of the city has been completely relooked in the past five years.

First the De Young museum, a major architectural feat, opened in 2005. Now the brand new California Academy of Sciences is set to open its doors in 101 days on September 27, 2008, after being closed four years on this site. Now all city officials need to do is remodel the Exploratorium, rush the San Francisco Museum, think about a tribute to the Coastal Indians and the city will have a brand new menu to offer tourists.

Back to the Cal Academy of Sciences. It’s a big project. Think a 212,000-gallon tank 25 feet deep with trained scuba-divers to tickle the Philippine Carol Reef. Think 63 gallons of paint to reproduce the 24 dioramas of the African Hall. Think two big installations by American artist Maya Lin, one being on climate change. Think Renzo Piano as chief architect, no less, designing the 2.5-acre living roof with seven hills of native plants coming from a 25-mile radius from the site. Think a planetarium tilted at a 30-degree angle with live space feed from the NASA. Think a tropical rainforest in a bubble with underground viewing of the flooded Amazon.

As I said, this is a big project. 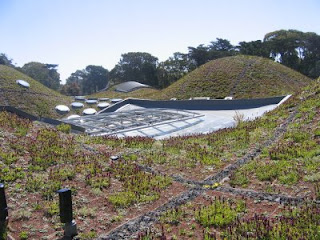 Despite the facts and impressive achievements, I couldn’t help regret that no part of the museum was dedicated to a North American eco-system. I asked Stephanie Stone of the academy’s press relations, why rebuild a tropical rainforest from the other side of the world when the Tongass National Forest in Alaska is a rainforest too and almost in our backyard? Olympic NP would be an even closer example. She replied that when the project was initiated several years ago, the directors faced a tricky blank slate with (too) many options to fill it.

They decided to focus the exhibits on:

So they ended up selecting Madagascar, Borneo, Costa Rica and the Amazon. That’s all very nice but since the Cal Academy of Sciences is a natural history museum, why not fill the crying gap in San Francisco’s museumscape?

Obviously it’s too late, but currently if you wanted to achieve something remotely close to the High Desert Museum experience in Bend, Oregon (an A-list natural history museum), you’d need to first take a hike to the Randall Museum in San Francisco, cross the Bay Bridge to the Oakland Museum of California to visit their aging natural sciences permanent exhibit, get on the freeway to visit the Lindsay Wildlife Museum in Walnut Creek, and for good measure finish at the Coyote Point Museum in San Mateo.

Is there ever going to be a simpler all-in-one venue in the city? For instance, who’s going to tell the story of the coastal indians who were decimated when pioneers and explorers settled in California? A Miwok hut in the cemetery of the Mission Dolores, another one at the Marin Headlands Visitor Center and a Miwok village at Point Reyes are no match in front of the enormity of what h 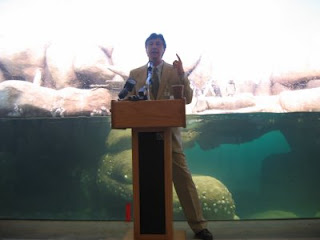 appened. Who is going to present coastal scrub, redwood groves and bristlecone pine desert forests in a sexy way to school students? Now, that would be a challenge.

I understand the point of the Cal Academy of Sciences, I do. It’s a noble mission and I’ll be the first one to bring my kids despite the $24.95 entry fee for adults. However, I would have preferred to see exhibits centered on our backyard too.

I’ll come and watch the 10.45am feedings of the African penguins just because I love Happy Feet and because penguins are cool animals. Also, Dr. Chris Andrews (on the picture in front of the penguins) was right. I didn’t know there were penguins in South Africa. I like surprises. Can’t wait to see the miniature replica of the turn-of-the-century two-mast schooner “The Academy” that sailed to the Galapagos Islands for scientific research purposes in 1905-1906. It’s going to be the centerpiece of the play area for young children, the Young Explorers Cove.