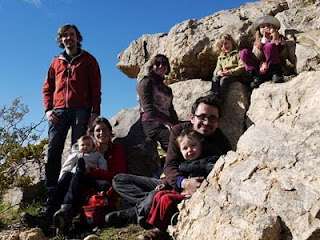 > Camping and hiking at Saddleback Butte State Park in the winter

Camping and hiking at Saddleback Butte State Park in the winter

When I take my family camping, I want the experience to be unforgettable – even if it means bloody 70mph winds in the desert, freezing temps, rainy nights and roadside campgrounds. Now my charming brother, who just visited with his wife and two toddlers, will argue that I didn’t know what I was doing; that I could have taken everybody nicely to the Yosemite in heated lodge rooms; that sunny beaches is what California is all about. But hey, where’s the fun in doing what everybody else is doing?

Just when we could have been cozy warm in national parks, I opted for a remote desert whose main claim to fame is a musical road designed for a Honda commercial. My husband was dying to go to the desert, the park website advertised “The desert experience – Like nothing else!” and Tom Stienstras’s camping book rated the campground an 8. So we went. When we pitched our tent at Saddleback Butte State Park in Lancaster in the dark hours of December 27th, 2010, I knew I had achieved “unforgettable” by the look in my brother’s eyes – and his “You really want us to camp in a parking lot?”

At first, Saddleback Butte was a tough sell. We had four kids with us, ranging from 10 months to 7 years and the weather forecast for the next day was “Rainy. Strong winds in the evening. High 20s at night.” Cars were zooming by on 170th Street East, 100 feet from us. The campground was desert apart from a lone trailer. In the dark at dinnertime, we pitched the tents anyway. A sand campsite is a double-edged sword though. Stakes go in like butter but at 3am when the fly is flapping madly against the tent, you have to get up (or send your other half) to check all stakes again and collect whatever kitchen equipment is playing kite.

The next morning, we lit a fire to brighten the spirits and warm up but it started drizzling so we had to take cover away from the fire. Too bad, so sad my girls said. Drizzle turned to rain and my brother climbed on top of the sun shelter to fix a tarp so we could have breakfast in dry surroundings. Crafty but not enough for one of the two benches. “Let’s go for a hike!” my husband and I then gleefully suggested. We’d driven 7 hours down I-5, easily the most boring highway in California, so we had better enjoy the park.

An hour later, we found the Saddleback Butte Peak Trail (there’s only one trail from the campground so no pain here) and off we were. Saddleback Butte is known as the closest Joshua Tree experience you’ll get out of Joshua Tree National Park proper. Indeed, Joshua trees were scattered in the campground (we’d noticed that the previous night) and were the only vegetation higher than us. It was cool and I loved their prickly pretzel shapes. However the peak ended up being the best feature in the park albeit a total wind magnet.

To give you an idea, Lancaster is located in Antelope Valley, west of the Mojave Desert. There’s a reason sun shelters in the campground double up as wind breakers. If not for the 3,651 feet Saddleback Butte sticking out, you’d be looking at a regular high desert: relatively flat, endless, and dry. Winds slam at you like they’re coming straight out from the ocean. Naturally, winds fight their way up the mountain and at the top, it’s like standing behind ten plane turbines at full power. But what a view! Kuddos to the California parks who were well-inspired to preserve Saddleback Butte back in the 1960s – and preserve a breathtaking bird’s eye view on the desert.

Barely 2-miles long, the way to the peak is easy on the sand and challenging on the rocks. That means we had a grand old lazy time for 1.5 miles and then broke out total quads power for the last 0.5 mile. Climbing was not the biggest concern though. The wind was. We had to hold hands with the little ones so they wouldn’t get toppled over by windy gusts on rocky patches. I even had to check my footing as I was carrying my 2-year old nephew and didn’t want to offer him a free roller-coaster ride.

I did some research since and wasn’t surprised to find that super wind farms are making their way to the Mojave Desert. It seems to be the biggest weather phenomenon in the area. I wonder how the pilots at the nearby Edwards Air Force Base deal with that. Oh yeah, I almost forgot to mention that. We heard the army planes all night. Yet another perk of staying at Saddleback Butte State Park: it’s aligned with the landing field  of Edwards AFB. It totally adds to the “I’m in a remote location” feel. These grey planes fly low and loud like big fat bumblebees.

Finally we summited. It’s a grand word for a short hike but it was still called a peak and I don’t summit every day so it feels good to say it. We used our hands to get through the last rocky stretch to the top, immortalized the rocks from up there, and moved away from the windy situation. Lunch time was dangerously close and we were carrying one backpack worth of food so we took the next logical step. We took cover from the wind on the other side of the peak and whipped up sandwiches with rye bread from that Moscow and Tbilisi bakery store at 20th and Geary and Ikea gravlax (please excuse extreme weakness at Ikea’s frozen food section). The result wasn’t bad. Only drawback: after my husband unwrapped the salmon, his hands smelled like fish all day. Views were grand, the wind didn’t blow in our face, and my brother didn’t mention the parking lot except to show my nephew that “it is really far, can you see it?” It did look really far.

On the way down, my nephew didn’t like the wind gusts at all so my brother and his wife jogged down the trail with the kids, their own way to experience slow living out in the desert. Once on the sand, spirits brightened up and we played around with tumbleweeds whenever possible. How could we not? They’re so big and light and they tumble so well. It’s terribly tempting.

Back at the campground, we did the unthinkable. We chickened out. We packed up to go sleep in a warm hotel room that night. True to my motto, it was unforgettable. It was the Fort Tejon Holiday Inn Express right on I-5. Grand old view on the highway, surrounded by two gas stations. Now it really felt like sleeping in a parking lot, except with central heating. Way to go for roadside lodging!

Don’t let that deter you from going to Saddleback Butte State Park. When the weather’s warmer, it’ll be great. Just know a few things before going so you’re not caught totally unaware:

Have fun, it will be unforgettable!