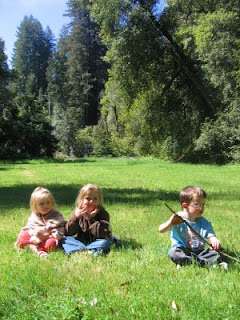 > Camping with Children: The Basics

Camping with Children: The Basics

With summer’s warm days and late twilights, it’s clearly time to think about going camping. Not only is camping it the cheapest vacation option (from $10 to $25/site/night de 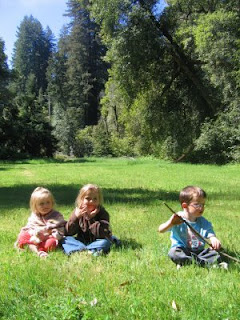 pending on facilities), but as Mindful Mama’s Karen Werner reminds us, camping is also eco-chic, meaning good for the planet.

I polled a group of Citymommy members to learn about their camping tips and avid campers responded with enthusiasm. Where to start? First, let’s dismiss a few misunderstandings.

What is car camping? Let’s face it, car camping and camping and nearly synonymous in the West. Hike-in, kayak-in, ride-in, bicycle-in, wheelbarrow-in camp sites are the exception. What that means is that you can pull up to your camp site with your car, unload a few yard 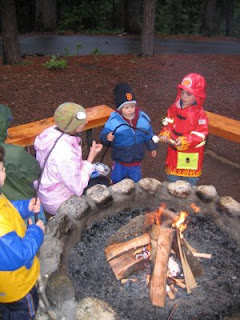 s away from where you will pitch your tent, and basically gravitate around your car as you go around your camping business. Car camping does not mean you get to overnight in your car – someone asked me. And if you are going backpacking, you might as well stop reading here. Car camping is just that: getting to your campsite in a car.

What’s the best age for children? I’ve read that children under two years of age were not such a good idea for camping. Why? I can’t be sure. According to my experience, there’s no such thing as a minimum age for camping. Camping will work great whenever you are ready. Children do fine in most circumstances – it’s parents who stress out. Our girls went camping as early as five weeks old. To get children excited about camping, get the animated movie called “Into the Great Outdoors.” It’s produced by Stephanie Rach-Wilson, a mother of two, and it’s great educational material to teach children the ropes of respecting and enjoying the outdoors.

What are the best sleeping arrangements? Breastfed infants can sleep with mom inside the sleeping bag, even if that means not 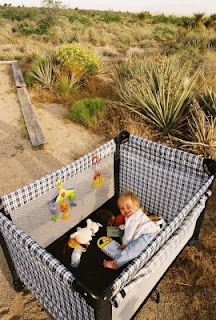 much of a good night’s sleep for mom (except if you can join two adult-size sleeping bags and get room to move around). When children are bigger but not ready for a child’s sleeping bag yet (say, up to age 2), they can sleep bundled up inside a pack’n play inside the tent. Yes, you read right. When with children, get a tent that your friends can call “the castle.” Turrets and moat optional. A big family tent, that is. Big enough that you can walk around in it and set up a pack’n play. Believe me when it’s cold outside or raining, you’ll appreciate the extra tent room. During the day, you can move the pack’n play underneath a tree for Junior’s nap or play time, or you can get some needed rest when you’re preparing meals. And then one day your children are big enough for their own sleeping bag and you can proudly take them buy their big kid sleeping bag. Now’s not the time to count your pennies. Nothing like a cold night to 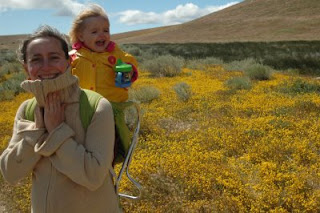 make someone crabby. Invest in a good quality sleeping bag that sustains +30 to +20 temperatures.

Should you go with friends? Yes, by all means. Camping is as much a community as a back-to-nature activity. As much as we can, we go camping with friends. Even if we don’t do the same activity during the day (say, if they don’t have children or diverging interests), we love spending the evening together around the campfire. My husband brings his guitar, children get to stay up until the first star s 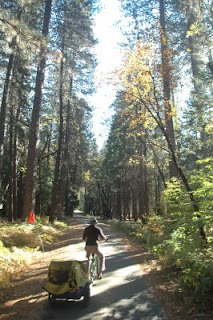 hows up in the night sky, and we get to spend a lot of time catching up on each other’s lives with a glass of wine. Plus, if your friends have children, theirs and yours can play together. I never worry when I know my kids are playing hide-and-seek in the campground close to us. It’s like that old neighborhood feeling, except in the great outdoors. Just watch out for poison oak if you are in coastal areas – long sleeved shirts and pants de rigueur.

What should you not forget? Well, aside from the obvious (your camping stove – it’s happened to us), there are a few items that make life a lot easier when camping.

– a plastic basin: to wash & rinse your dishes,

– a big bucket or plastic bin: if there are no showers around, you can fill a big bucket with cold water, boil two big pots full of water, and give a lukewarm “bath” to your children before bedtime. We usually set the tub on a tarp so that they don’t have to step out on the dirt to get into their pajamas.

– flashlights, lanterns and glow lights: crazy, I know, but kids don’t glow in the dark. So if you want to find yours when it gets pitch black, get them a cute flashlight at your local hardw 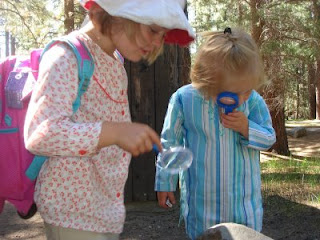 are store, or a lantern with a handle, attach it to a lanyard and let them walk around with their personal light. Glow tubes are sort of a not-so-great option because they don’t last more than one night before going to the landfill. Golden environmental sticker to hand-cranked flashlights and lanterns. No batteries, minimal effort and great results.

– a child carrier: if you’re going hiking, it’s always easier to pick up a child than to cut a hike short.

– a roll of paper towels: you never know when you might have to clean up a mess. Wipes can be used too but they’re usually loaded with chemicals so I don’t like to use them.

– tweezers: first, ticks do exist in California. Here is all you need to know about ticks and Lyme disease by Tom Stienstra from his book Moon Outdoors Northern California Camping. Also, picnic tables can shed 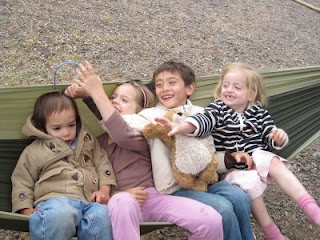 – the S’mores set: Graham crackers, marshmallows and chocolate bars. No need to explain why forgetting that part would be disastrous on the morale of the young troups.

– bug boxes: bug boxes are usually found at ranger stations or naturalist stores and allow children to admire smal living animals without hurting them, before releasing them into the wild.

– a portable potty: if you have children under 5 and you don’t look forward to a late-night dash to the cabin in the woods, bring a smallish potty and TP.

– bring plenty of layers: that goes for kids and adults. You experience whatever temperature is out there. No fan, no spa 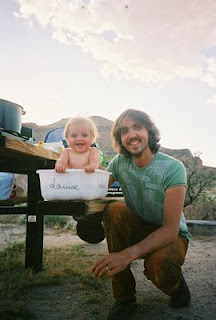 – a travel hammock: superlight and sturdy, these can be extremely useful … and relaxing.

Ranger programs? Ranger programs are the quintessential vacation treat. Says Debbie Abrams from Frisco Kids, “some parks have junior ranger programs where you can drop your kids off for an hour or two. Of course there are also evening programs – they work better for the older set (starting around 6). And national parks have workbooks for the kids where they can earn junior ranger badges or something like that, if they complete them.”

As a matter of fact, our girls became respectively Junior Ranger and Little Cub at the Yosemite National Park last year when they were only 3 and 5. Even if they were not quite old enough for this, the ranger was super nice and made a big deal out of it at the ranger station, announcing it to everybody and making my 5-year-old swear the junior ranger path, before awarding the coveted golden badge. Everybody clapped and cheered and my girls still talk about it.

Now enjoy the great outdoors and check back here soon for the best camping spots in Northern California.

6 thoughts on “Camping with Children: The Basics”