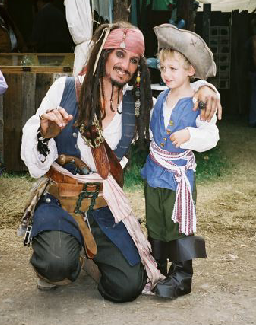 > Capt’n Jack Spareribs: Where is the Barbecue Sauce!?

Capt’n Jack Spareribs: Where is the Barbecue Sauce!?

Someone’s riding the Black Pearl wave pretty high and he’s the funniest pirate you’ve ever heard of: Capt’n Jack Spareribs a.k.a. Ace Miles just got nominated as the best in the Family Fun category of the San Francisco Chronicle’s BayList 2009 contest.

Remember how Captain Jack Sparrow keeps muttering “Where’s the rum gone?” Well, Capt’n Jack Spareribs will say: “Where is the barbecue sauce!?” Yes, Mr. Miles is not simply an impersonator of the sexiest man on earth. He’s a spoof of many talents who can deliver jokes with a fierce smile. In France, he would be part saltimbanque, part stand-up comic.

He’s a performer, an actor, a ventriloquist, a puppeteer, a juggler, a magician, and a self-described scallywag sort of fellow.

Want to see him perform this weekend? No problem. He’ll be at Pier 39 (look for Ace Miles) this Friday at 6.15 and 7.30pm, and at Bay Street in Emeryville on Saturday between 11am and 4pm (on the grass circle area). Aaarrrrrrrr….

If you want to see him some more, he has his own stage at the Northern California Pirate Festival, a festival (third year in the running) that attracted 35,000 people in 2008. This year’s edition takes place on Father’s Day weekend in June in Vallejo. Then of course, he will perform for family or company events. Why sure, a few of the world’s worst pirate jokes are sure to relax your clients.

I asked him his favorite joke over the phone. He goes: “Do you know how much a pirate pays to have his ears pierced?” Of course I don’t so I keep silent. “A buck an ear!!!” (say it out loud). Now the kid version: “What was the new pirate movie rated?” Answer: “Aaarrrrrr…..”

Yes, Capt’n Jack Spareribs is that sort of a rib-tickling guy. And why wouldn’t he be? The more I read about pirate sightings and haunts in the Bay Area, the more I am amazed by how many there aaarrrr……

After all, I wrote last year about the San Francisco pirate spirit and it is pretty high. Is it the proximity to Hollywood?

Ironic for a part of the world that never sa 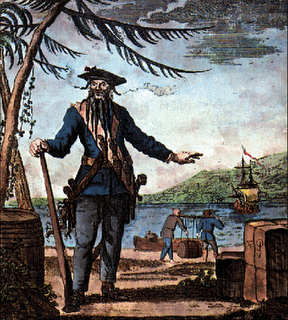 w even the shade of a single swashbuckling pirate for historical reasons. Hey, when the Yerba Buena fishermen’s village boomed in 1848 and 1849, the Golden Age of piracy was over. If you look up your classics, you’ll realize that it lasted from the mid 1600s to late 1700s. Take Edward Thatch ( c. 1680 – November 22, 1718, ) otherwise known as Blackbeard. He roamed the Caribbean Sea and the western Atlantic during the early 18th century. Way when North California was not even on the Spanish’s map.

So San Francisco, the last pirate frontier? Believe it or not, it’s easier to find eye-patched buccaneers than hat and cane walking Victorians in the City by the Bay. Honestly, the city should think about sponsoring a fake pirate fort on the Farallon Islands and charter boatloads of tourists at night in candlelit taverns once on shore. In the kid realm, what playground doesn’t have its pirate ship? Isn’t Talk Like a Pirate Day widely followed?

Mr. Miles strikes the right chord with the Bay Area audience. Long live Capt’n Jack Spareribs and his talking monkey. May he find his travelling companions before Whole Foods gets to them. Will Burger and Elizabeth Shank, that is. (Sorry, had to give it a beefy try.) Get out there and see Capt’n Jack Spareribs, you’ll have a whale of a time.

2 thoughts on “Capt’n Jack Spareribs: Where is the Barbecue Sauce!?”