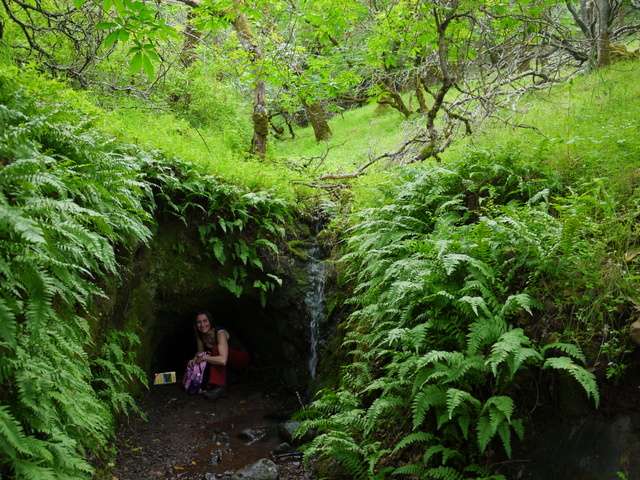 > A Gothic Cave and Fig Tree Hike in Napa

A Gothic Cave and Fig Tree Hike in Napa

Lets say the odds of finding a winery versus a wilderness area are 450  to 1 in the Napa Valley and you understand why Napa hiking takes dedication. It’s not like there are crazy “hike this trail” sign at every street corner with opening hours and phone number. Despite being outnumbered by wine tasting rooms, Napa trails have a unique charm and here’s a place where you can take the kids for a green escape during wine country trips. Right in the city of Napa, no less. On this discovery of Skyline Park Wilderness, kids will have a blast finding a couple caves  and an elusive – though  massive – century-old fig tree whose giant branch system is a tree house in itself.

Right in Napa on the eastern side of the Napa River, the Lake Marie Trail at Skyline Park Wilderness lead us to small surprises along canyons and hills that transformed an afternoon stroll into a mini-treasure hunt. For my girls, the highlight was the caves – no surprises there. For my husband and my dad, it was a welcome green escape in urban wine country. For me, it was a foray into the past of Napa’s infamous Gothic Asylum for the Insane.

Covering 850 acres of former Napa State Hospital land, Skyline Park Wilderness is run by volunteers and offers 17 miles of hiking trails open to the public, an archery range, a campground, disc golf and a horse arena. If it weren’t eclectic, it might be random. In 1875, the grounds featured a giant Kirkbride building called the Gothic Farmhouse. Built as a “sanctuary for the mentally ill”, it was said to be a mile in circumference, made of slate, marble and nine million bricks made on site, complete with spires, decorative gargoyles and crowned towers. How do you feel about that? Sanctuary indeed, the whole Addams Family works. Don’t salivate though, it was smashed to smithereens in 1949 – probably for the benefit of everybody’s sanity.

Before The Hike, Sun Exploration

When we showed up one Saturday afternoon at the parking lot of Skyline Park, a retired astronomy-buff/nuclear physicist (that’s the guy who studies atoms and particles, not a doctor) had set up his van and a giant scope on the adjoining lawn to show spots on the surface of the sun. Cliff de Lacy (that’s his name) operates The Star Guide and describes himself as a solar system ambassador. He asked my girls if they would like to see the sun up close but they were reluctant at first. They were scared they’d be blinded. The promise of a special scope with a filter got them to overcome their fear but they didn’t look too long – you just never know. As a reward, Cliff  handed my girls special sun-viewing glasses and NASA-sourced material on the solar system that they got very excited about. Told you the place was full of surprises.

From the parking lot we followed a narrow dirt path that turned right in front of the native plant garden and followed it past the campground to a wide fire road. We soon passed two muddy reservoirs grandly named Lake Louise and Lake Camille, whose only inhabitants were birds. At the next junction we turned left and followed the sign towards Lake Marie.

The first cave you will find on the side of the road at 0.5 mile. Built for water exploration, it’s shallow and easily accessible but you won’t go very far in it. As you continue your uphill ascent, look for a stone wall on the other side of the canyon after you reach a rocky and steep area. I call it Napa’s Hadrian Wall. If you trace an imaginary line from the wall to where you are, try to look up your side of the hill and find unusual rock clusters. It seems that the stone wall was built to mark property boundaries in the 19th century but to a European eye, it is reminiscent of the low stone walls used to contain cattle on your side of the fence.

On you go, now reaching the Bayleaf Trail junction. Stop there and have the kids look across the trail for an old gnarly tree. It’s not pretty, it’s not impressive, but they’ll find a trodden path and branch tunnel to go under it. This is a venerable Fig Tree who’s roughly a century old. Bend over and check out the inner branch system. It’s an incredible natural fort.

Keep going, past a picnic table (note to self: lunch or snack break) and an outhouse (a real one with a star and crescent moon design, how quaint). The path descends into a wooded area and around 1 mile, you will find a narrow path to a cave framed by lush ferns. Contrarily to the first cave, this cave is natural and goes back a couple dozen feet underground with water covering the bottom.

At this point we split in two groups as my husband wanted to go back to the car. He took the girls with him, I continued with my dad on the same road.  right above the creek that you might hear gushing. There’s a trail at creek-level for the water-lovers in us but I didn’t spend enough time to know how to reach it.

I followed the directions of Ken Stanton’s book Great Day Hikes in & around Napa Valley and was lured by the perspective of “weird ruins reminiscent of ancient Egypt, or Mayan temples moldering in tropical jungles.” Now Ken, either my dad and I didn’t go far enough – completely possible – or you’re the most creative guy I know. All we found was the three remaining concrete walls and the rusty chimney of the … hospital’s crematorium. Yes there’s great Gothic potential in an open air crematorium lurking on the side of the trail but it’s nowhere near the Macchu Picchu.

According to the unreliable Wikipedia, “from the early to mid-1920s through the early 1960s, patients no longer were buried on hospital grounds, and no bodies were ever exhumed from Napa State grounds. Because burial acreage was limited, an on-site crematorium was built at Napa State in the mid-1920s and was in use until sometime in the 1960s.”  Guess I’ll have to come back and do the hike all over again.

At this point we felt guilty for leaving the others and turned around, retracing our steps on the same road.