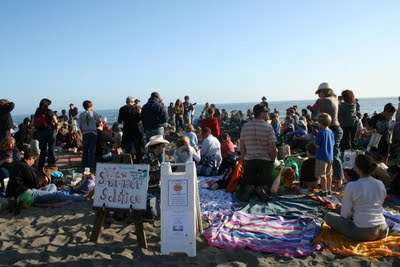 December 21st marks the winter solstice with a luminaria-lit redwood ceremony at Muir Woods National Monument. June 21st marks the summer solstice with a beach bonfire, stories and the sound of crashing waves on Muir Beach. They both have their particular charm but kids definitely prefer an evening at the beach where they can run and splash around before the ceremony starts.

In sharp contrast with the craze of Muir Woods, Muir Beach is a quiet beach with fine sand and trails that climb up the bluffs to lovely overlooks. When we arrived last year around 5pm, parking was easy. We gathered our beach toys and food, crossed the boardwalk on Redwood Creek and crossed the beach to reach the bonfire spot.

The rangers were busy like bees setting up their signs, blankets and boxes of props and music instruments. The bonfire was already on its way though its warmth was not needed yet. We were pretty much in the first dozen of participants and I feared – without reason as you will see – that we would be part of a very small crowd.

We lay our blanket on the sand facing north and broke the picnic dinner as our girls frolicked in the sand. Ironically we thought we were so sophisticated with our home-made sandwiches and fruit when in fact people bring full coolers of food, hot dogs to roast on sticks, wine and fancy stem glasses. All of a sudden we were apprentices in the world of beach bonfires!

Waiting for the evening to come, I walked up part of the trail and enjoyed the beach basking in the last golden rays of a sunny day. I could see myself waiting here a long time but advancing shadows told me I had better come down not to miss the show.

Mia Monroe, superintendant of Muir Woods National Monument, announced the official start of the ceremony. Our girls settled down next to us and converted their playful energy into storytime energy. They were about to learn about the sun and the moon and the longest day and shortest night of the year.

At the very beginning, we all took turns adding stems of wild mustard to the bonfire so they would burn later on. I forget the specs now but I think it’s because it’s an invasive plant and it was a symbol of native habitat restoration.

The first musical act consisted of the Marin band Orange Sherbet who led the crowd into hippie family songs. As I write this a year later, I wish I could find the song booklet they distributed to tell you which songs. All were familiar tunes and most people joined in the sing-along.

I was surprised to notice some in the audience had brought their own musical instruments – drums, guitar, ukulele. They even joined the Orange Sherbet lady duo on a few tunes. This was a community experience!

The evening unfolded with animal stories, a puppet show, nature songs accompanied on the guitar and poetry.

I talked with a couple behind us and the woman turned out to be a total francophile and a former French teacher in Latin America. Good for me! She was a friend of Ms Monroe and introduced me after the ceremony was over. I was thrilled.

As we were about to leave, a family behind us shared a coveted treasure with our girls which they could not refuse: marshmallows!

They each grabbed a handful, didn’t even bother about sticks and gobbled them up like they hadn’t eaten in a day. Guess the home-made sandwiches weren’t enough after all!

Knowing we still had an hour of driving to head home, we packed our belongings and bade goodbye to the people we had gotten to know around us. For a bonfire with total strangers, I was surprised at how friendly it turned out to be.

In the fading evening, the hills of Marin were still sunny but by the time we reached the city, dark was upon us.

On our girls too. They were sound asleep. Dreaming of celestial coyotes, sneaky raccoons and mighty moons.