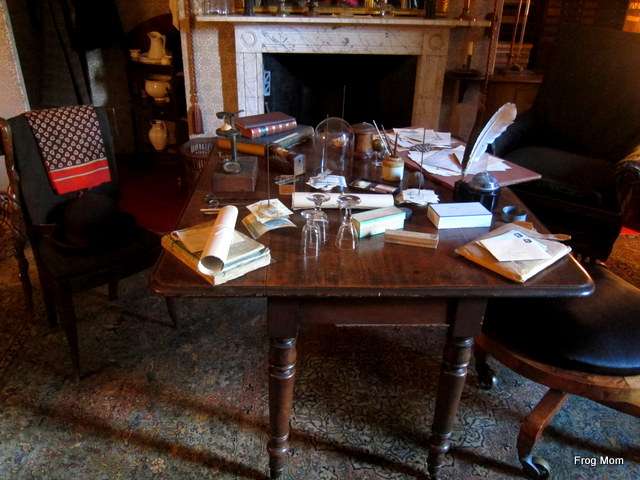 When visiting London, take a day trip to the countryside and visit Charles Darwin’s home in Kent, Down House. When Charles Darwin researched The Origin of Species after his five-year voyage on the Beagle, he settled in the rural village of Orpington in Kent at Down House.

Surrounded by a forest that we hiked through with my girls, the house looks down on a lush garden, an exotic plants Victorian greenhouse and an apple orchard. When I visited the house with my girls, we were happily surprised to find interactive fun or historical exhibits related to Darwin’s life, as well as natural sciences–in addition to the museum. It was a blast and getting our girls out of the kids’ playroom was the biggest challenge that day.

Walking to Down House

We started our afternoon by walking from the Baptist Church in Downe towards Down House on a circular route. We crossed several fields and woods, some of which probably served as living classroom for Darwin when he studied plant diversity and pollination.

Once we passed the gate of Down House’s outer wall, we were in an entirely different world. Not far from the mad greenhouse in Minority Report, Darwin’s greenhouse is still filled with rare plants, each displaying its individual handwritten name tag with scientific and common name. Darwin got a lot of these plants from a botanist, Joseph Hooker, as well as from a group of wealthy enthusiasts who cultivated and propagated rare plants as a hobby.

Carnivorous Plants at Down House

My girls were instantly fascinated by a row of carnivorous plants, asking each other if they should tickle the plant with their fingers and see if they got gobbled up. Major thrills were had in front of the flytraps but wisely, my cautious offspring decided to keep their fingers safe. A few feet from the greenhouse, a hole in a brick wall led to a manicured grassy glade. Oh the tumbles and rolls! My girls couldn’t resist and spent a long time laughing their heads off while tumbling on the grass. Eventually we thought we should get inside the house before it closed and so, pulled our crew into the shop to buy tickets.

An English Heritage membership later, we stepped inside the house. It felt eerily normal for the house of someone so big, someone whose mind has altered the thinking of humanity. On the landing of the second floor, an amazing curiosity cabinet displayed hundreds of stuffed birds of all colors and sizes on fake branches.

Family Fun at Down House

Right next to it, a single step led to the education room. That’s where schools stop during their visits and it’s easy to see why – giant chess game, dress up trunk, plastic dinosaurs and other animals, a globe, kid-size tables and chairs. If I were a child, I’d spend a lot of time in there and such a room is extraordinarily appropriate in a home whose walls echoed with the laughter and voices of so many children.

Charles Darwin was the doting father to 10 children and believed in the wonders of fostering unstructured play and fostering creativity. One of the other rooms on the same floor showcased a stair-slide, the sort of invention that made my 7-year old fantasize on what we could do at home. And it’s really wonderful: a wooden indoors slide that rests on the stairs of a house. Almost beats the banister…

Across the hall, Darwin’s life and the voyage of the Beagle took center stage in a series of cases featuring original notebooks and writing instruments, guns and binoculars, maps and Victorian biographies. The theatrical highlight of that floor was a reproduction of the Beagle’s deck where Darwin sketched and did his research, complete with a 3-D hologram Darwin writing at his desk. How fun! Two rooms remained on that floor. One followed in detailed panels the family life and choices Darwin made, the other one featured hands-on experiments for people to understand the evolutionary theory.

Down on the ground floor was the real museum, the home of Charles Darwin furnished and decorated as if the scientist himself still lived and was going to ask you to stay for dinner.

If there’s anything I took from that visit it’s how much of a family man Darwin was, how close he was to his children and how he involved them in his research. Stereotypically, I rarely think of great explorers as having a rich family life. I think of solitary souls with a rich intellectual life but poor social skills. That’s not Darwin’s case and that’s why visiting his house makes as much sense as learning about his works.

His family was important to him. His home too. He lived at Down House, walked in the woods around his home, studied rare plants in his greenhouse, watched his children grow, followed a life of scientific research and became one of the greatest minds of his time. To Charles Darwin, the explorer who said no to his dad when he wanted him to become a clergyman or a doctor, the explorer who followed his passion against all odds.