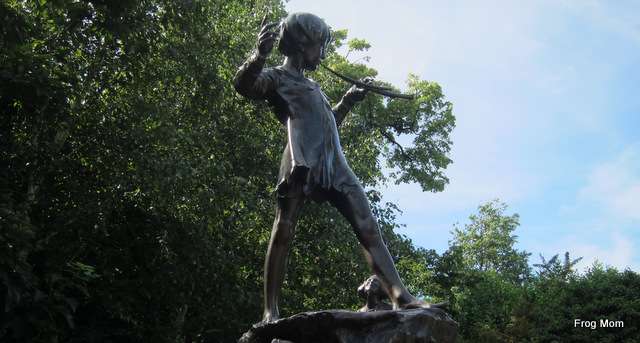 > Chasing the Ghost of Peter Pan in Kensington Gardens

Chasing the Ghost of Peter Pan in Kensington Gardens

If Peter Pan could fly, it’s because he was part bird part human, a Betwixt-and-Between person coming from Kensington Gardens in the heart of London. This comes from The Little White Bird, an early work of J. M. Barrie extended later into a book called Peter Pan in Kensington Gardens. You see, Peter Pan was born out of J. M. Barrie’s daily walks in Kensington Gardens and his playful encounters with the Llewelyn Davies boys accompanied by their nurse. Though the mermaids came from Black Lake island, they could have been born in the watery depths of the Serpentine, a stone’s throw from Peter Pan’s birthplace. Since I only know Kensington Gardens by day – which is pity because that’s when fairies are hiding, I decided to go for a walk and a swim, hoping to find the haunts of the boy who wouldn’t grow up.

When you look for a ghost, it doesn’t really matter where you start because obviously, ghosts are nowhere and everywhere at once. I like to start my chase of Peter Pan’s ghost at the gate behind Kensington Palace, the one that has a metal fence in front of it. I always note that people go around the fence on the left so I make a point to go in through the right for good balance. Just up the dirt trail I arrive at the large path that J. M. Barrie described as the Broad Walk in Peter Pan in Kensington Gardens. The Broad Walk was where you met all the people who are worth knowing, and there was usually a grown-up with them to prevent them going on the damp grass. I’d say people worth knowing are still attempting to go on the damp grass but with higher rates of success as grown-ups too like a good vantage spot to admire the swans and ducks on the Round Pond.

If the same people worth knowing wanted to get into Peter Pan’s head right there, they could find two small stone graves nearby. They’re hardly noticeable and look out on the Round Pond. Engraved with initials, they were attributed by Barrie to two children named Walter Stephen Matthews and Phoebe Phelps. Then he told the Llewelyn boys that at night, Peter Pan buried children who died of dark and cold in the gardens because they’d stayed after lock out to admire the twinkling fairy house. Bad fairies were not be trusted after lock out, apparently. However Walter Stephen Matthews and Phoebe Phelps would have been too young for the twinkling fairy house. They were barely toddlers and fell out of their nurse’s “perambulators” without anybody noticing. Peter Pan buried them side by side so they wouldn’t be lonely.

Reflecting on the dangers of staying after lock out or falling out of perambulators in Victorian days, I cut through the damp grass heading north-east. I needn’t worry about pedestrian lanes and continue until I reach the walk that parallels the Serpentine. There at the crossroads, so to speak, stands a big tree where tourists like to feed pigeons – silly them, isn’t that forbidden? – and where spoiled squirrels expect to be served full nutty meals by regulars. I know where I’m going and I turn left to find the statue of Peter Pan, looking directly over the Serpentine.

It’s J.M. Barrie himself who commissioned Sir George Frampton to build the statue in 1902. It took ten years to shape it and get it to that spot. If you get close enough – while children attempt to climb the bronze monument, you will see the squirrels, rabbits, mice and fairies climbing up to Peter. All of them live in Kensington Gardens, you know that. However you may wonder, as I did, why this particular spot where a singularly ugly duck likes to take up residence on a wooden pole in the water? In The Little White Bird, Peter flies out of his nursery and lands beside the Long Water. The statue is located on this exact spot.

Since I am looking at the Serpentine, I might as well start my Serpentine exploration because as all explorers well know, no overground exploration is complete until it goes underground or as in the case of the Serpentine, underwater. The water in front of the statue wouldn’t do, it’s off limits to swimmers. So I walk east, up and over the bridge, down the hill and past the reeds, up to the Serpentine Lido facing the cafe. Framed by ancient trees and Victorian buildings, the Serpentine is a birds’ paradise and Barrie described it as a lovely lake with, he wrote, a drowned forest at the bottom. He said that if you peer over the edge, you can see the trees all growing upside down and that at night there are also drowned stars in it.

Peering over the edge is not enough for the determined explorer. I change into my swimsuit, put on my swimming goggles and go in, looking for the spirit of the mermaids and the sunken forest. Where the ladder ends underwater at the end of the pier, I land on a pebbly or gravel-y area that steadies the swimmer’s feet without slippery or mossy interference. Much appreciated, I prefer rocky to slippery bottoms. The forest starts as the bottom gently slopes towards the lake’s middle. All right, that’s not quite how it happens.

Close your eyes and imagine a large pool of subdued colors under a pewter sky filled with menacing clouds. The perfect skies for a pirate ship to smuggle in captives tied to lone rocks before high tide. Now never mind the skies and swim out. Open your eyes. Closer to the edge that the moorhens call their kingdom, the bottom is covered with a green-tea moss that looks like puffy threads hanging below you. As you swim further out, the moss gives way to a luxuriant underwater forest that seems to sprout out of nowhere. It’s not the sort you imagine, with real trees rooted to the bed of the lake and branching out all over the place. It is a weed jungle that the South Seas Black Lagoon mermaids would have liked to hide in before coming out to scare Wendy. The thick of it – literally – grows untamed outside the cordoned-off swimmers area. Suddenly the underwater forest reaches all the way from the depths of the lake to the surface and you may feel like an intruder without fins or feathers.

If no mermaids are in sight, I swim until I need to get dry. My chase of Peter Pan’s ghost isn’t over yet. I need to find fairies, native Americans and pirates. Jumping on the wind, I go where dreams are born and time is never planned – the Diana Memorial Playground. Captain Hook’s huge wooden pirate ship is moored in a sea of sand and young landlubbers are invited to climb to the crow’s nest to look out for Peter Pan. From the top where birds fly, they see the tippees of the Native American village.

But the fairies? The real fairies I find them in the thousands of pieces of children’s laughter echoing through the park. I remember the story. When the first baby laughed for the first time, its laugh broke into a thousand pieces, and they all went skipping about, and that was the beginning of fairies.

And so I catch a furtive glimpse of the boy who wouldn’t grow up in all the people worth knowing for whom life is a big adventure. Next time you visit Kensington Gardens, remember pirates and mermaids, fairies and bird humans. They’re shy by day but present nonetheless.