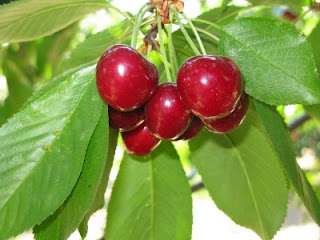 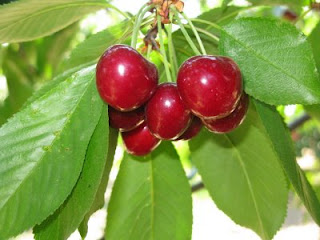 haven’t heard, the season for cherries is now. Bing cherries, Rainier cherries, Brooks cherries; there are more cherries than you ever dreamed of just 60 miles east of San Francisco. Hundreds of trees literally loaded with jewel-like shiny plump and juicy ruby fruits.

The Brentwood farmers are well organized and their great website references all the surrounding farms growing cherries (amongst 45 products) with description of the farm settings and “u-pick” options.

Based on recommendations, we took the 1.5 hour drive through golden hills already burned by the sun, fields of wind farms and silver ribbon of winding roads to get to Brentwood. Once there, it’s like an oasis in the desert. Somewhere you can’t help marveling a 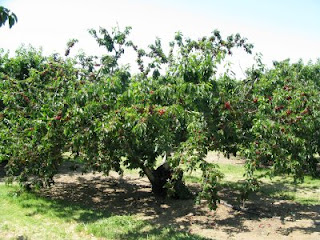 t the wonders of irrigation. Green orchards all around, and more “Cherries” signs on the roadside than anywhere else I’ve been.

I fancied Rainier cherries (the whitish variety) so we headed to Pomeroy Farm. Much in the fashion of Half Moon Bay’s pumpkin patches, Brentwoods orchards are close to one another and all grow the same fruit (more or less) so there’s a lot of choice for families.

At the entrance, we signed a paper promising not to let the kids climb on ladders and to pay for a mimimum of five lbs of cherries ($2/lb) when exiting. We picked a galvanized metal bucket (with handy hook to hang from your picking bra 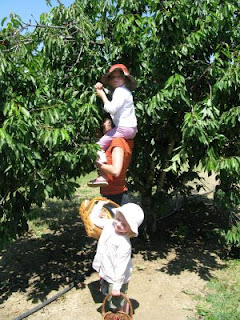 nch) but our girls preferred to drag along the wicker baskets we brought from home. I bet they felt like the little red riding cherry-picking hood.

Since there were so many cars parked outside, I thought we would need to walk miles before finding a half-eaten fruit on the trees but lo and behold, we found some right in the second row. Sweet. The nice part, for people like us with little (read “short”) children, is that most of the trees have low-hanging branches that make for scandalously easy picking at junior level.

Part of the fun is also getting to the highest branches for the “right” cherries and for this, we proceeded with a little imagination and a great team effort. We said kids wouldn’t climb on ladders – yes – but we didn’t countersign that they wouldn’t climb on their parents’ shoulders! One on my shoulders, the other one holding the basket, they thought it was great.

Before we brought our girls to the cherry farm, it’s fair to say they were not cherry enthusiasts. They wouldn’t try one if we bought a pound at our local market. However when in the orchard, I encouraged them to taste one cherry from each tree to find just the right flav 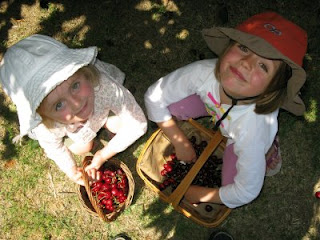 or. That was genius, man. They got totally hooked and soon were reviewing sweetness, acidity and texture of the different fruits tasted, hurrying from one tree to the next and offering us better halves.

In less than an hour, we gathered 8 lbs of cherries. Ironically, the Rainier cherries, the very reason I chose Pomeroy Farm, were not quite ready yet. So we ended up bringing back home only red cherries. Plus, the Pomeroy Farm is a former walnut orchard and they still sell walnuts grown on the farm. They were simply delicious and I’m glad we brought back two bags.

Now. What do you do with 8 lbs of cherries? As my fat 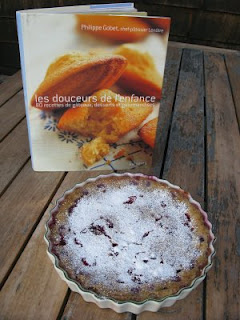 her always poetically says, eating too many cherries will have quick effects on your digestive tract. Thanks Papa for the reminder, but let’s not forget cherries are loaded with all sorts of antioxydants.

I won’t post a link to the two cherry clafoutis recipes on epicurian.com because one offers to eat it with vanilla ice cream and the other one includes cinnamon in the recipe, which are both borderline criminal.

I took my recipe from Les Douceurs de l’Enfance, a lip-smacking book with artistic photos of French childhood favorites. However since not everybody reads French, the next best recipe was this one (with metric weight measures) or this one as a strawberry variation that Clotilde Dusoulier from the Chocolate & Zucchini food blog wrote for NPR’s Kitchen Window. Enjoy!

As for me, I know I’ll be driving on the same road this summer to pick some nectarines, apricots and peaches. Can’t wait, apricots were already starting to blush!

3 thoughts on “Cherry Picking In Brentwood”