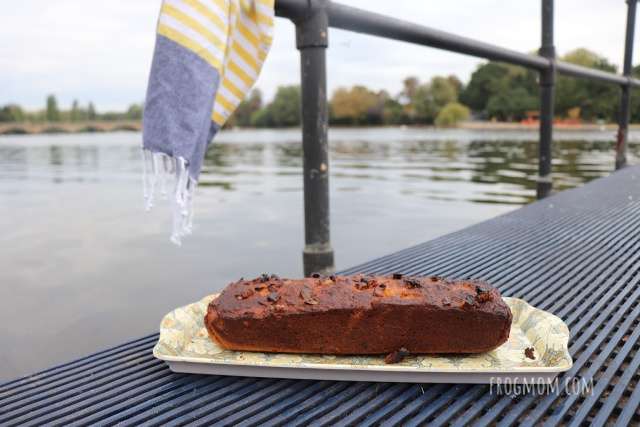 First week of October 2019 in the changing room of the Serpentine Swimming Club, my dear friend Graham greets me. “It’s October!” he says, talking about leaves falling off trees and night temps in the single digits. He then breaks into a wide grin. “That can only mean one thing – it’s the season for your chestnut honey cake!”

This honey chestnut cake is an absolute riot and the reason this recipe is so great is that it’s one of the few chestnut cake recipes that uses fresh chestnuts as opposed to chestnut flour. Now, don’t get me wrong. I love chestnut flour and it’s great in waffles and pancakes but fresh chestnuts have a certain je ne sais quoi that makes them the epitome of autumn. Until you’ve pricked your fingers trying to pry open a sweet chestnut and realized that squashing it with the sole of your shoe is a lot less violent, you don’t really appreciate chestnut picking.

If you have sweet chestnut trees where you live and if you are brave enough to harvest, roast and peel them, then you’re ready to make this delicious cake and be friends with Graham – and many more people.

It uses only 5 ingredients and if you are lucky to have sweet chestnut trees in your greater backyard, it’s also an opportunity to go out and forage wild edibles. Once you’ve foraged (or bought) sweet chestnuts, you’ll need to roast them and peel them to start this recipe. An open fire comes to mind, as well as any permissible means to peel sweet chestnuts (while keeping a skin layer on your fingers). Failing an open fire, any of these should work:

You get the idea.

First, you need to roast chestnuts in a dry pan until golden. Takes about 5 minutes. 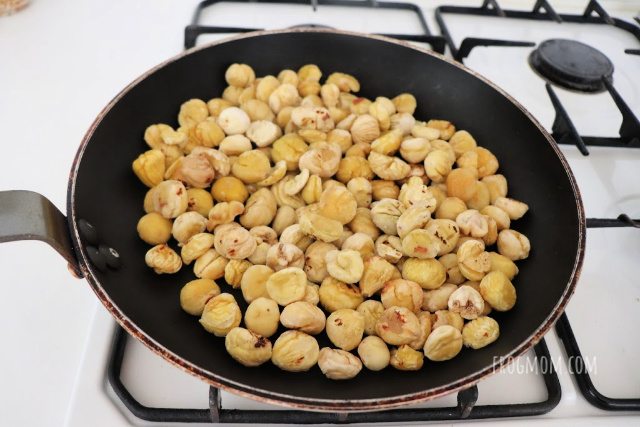 Once roasted, I blend them in the food mixer until coarse to tiny. That’s before. 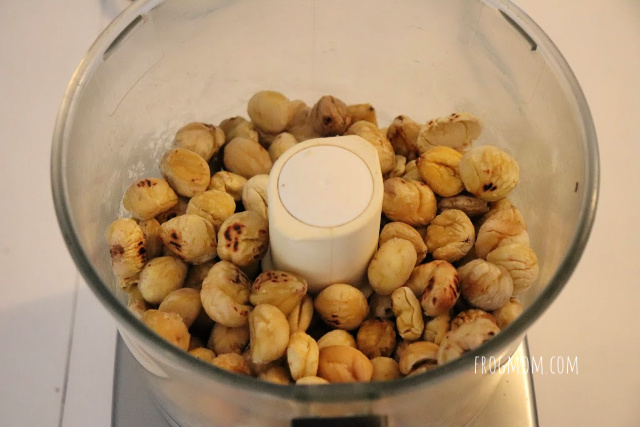 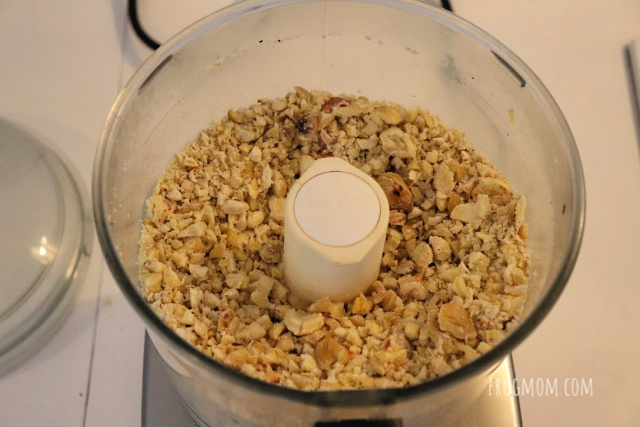 To be fair, that was slightly too coarse and I had to blend again to reduce it to a more floury texture a bit later. Remember that this cake is gluten-free and uses no wheat flour, hence the importance of reaching a mealy consistency for the chestnuts. 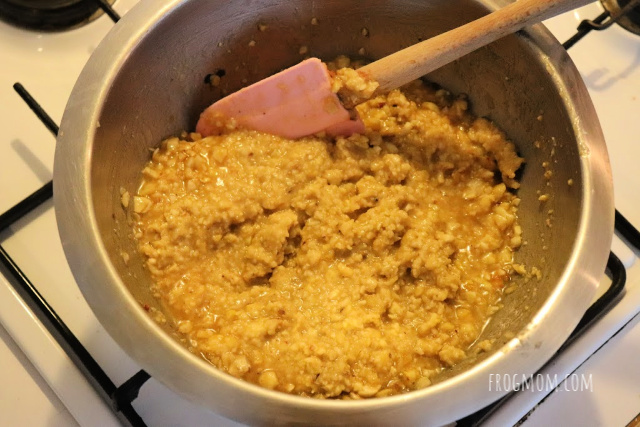 At this stage, use a large mixing bowl to stir all the ingredients except the egg whites together into a thick batter. In a separate bowl, beat the egg whites into stiff peaks. 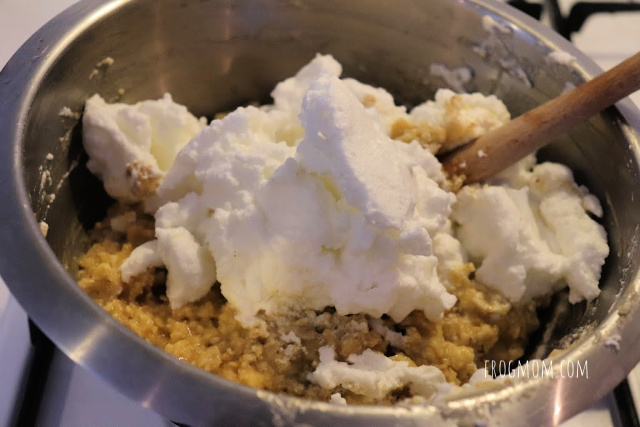 Fold the egg whites gently into the batter and… 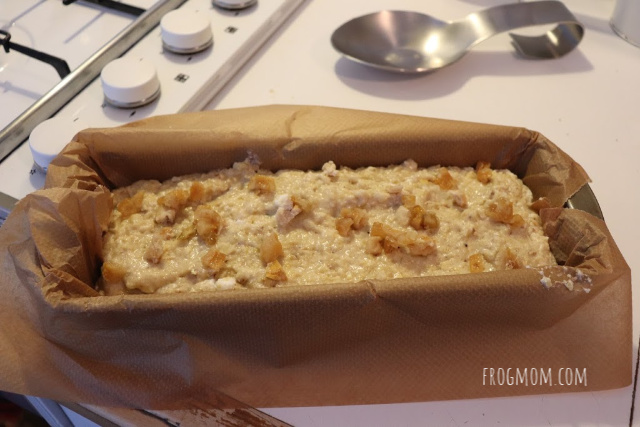 … pour into a baking paper lined cake pan. I prefer to use baking paper as it makes unmolding easy but you could also butter and flour a non-stick cake pan to the same results. At that stage, I remembered that I candied some citron from my father’s garden and never used it so I sprinkled a few on the top. Now it was time to bake the cake in the oven, 180C/375F, until golden and a toothpick came out dry — about 35-40 minutes. 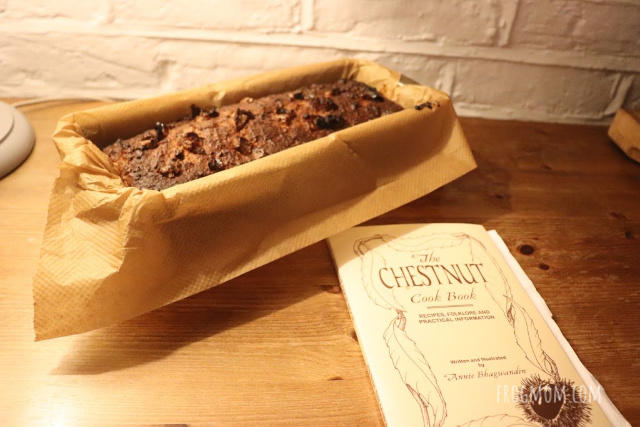 Tada! I even strategically placed it next to my favorite (as in, my only) chestnut cookbook bought in the Santa Cruz mountains 15 years ago and used religiously ever since. The following morning, I packed up the chestnut honey cake into my bicycle paniers and rode to the Serpentime for the Saturday morning swim races. Swim + cake is sort of a tradition so I son as I was dry, I whipped up the cake but before passing it around, I took a picture in situ.

Admire the glory of the Serpentine with a cake! It looks a bit funny but that’s ok. No smooth edges on this type of chestnut cake. 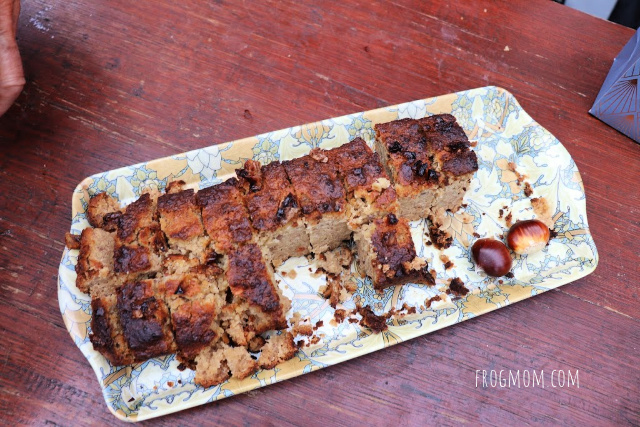 The trickiest part was probably photographing the cake before it was gone. Can you spot the hungry finger in the top left corner? Our friend Nicola judiciously placed two fresh chestnuts picked up in Hyde Park on the cake tray for the wow chestnut factor.

It was delicious and crumbly, as you would expect a gluten-free cake. Perfect with a hot cup of breakfast tea and a dash of milk.

Enjoy it while chestnut season lasts! Or cheat and use frozen ones but don’t tell anyone.