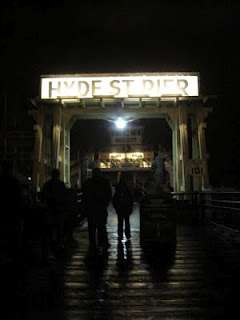 > Christmas at Sea at the San Francisco Maritime Historical Park

Christmas at Sea at the San Francisco Maritime Historical Park 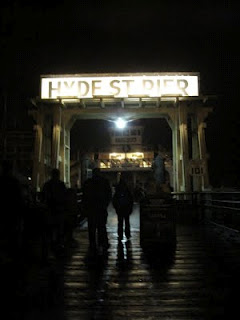 Christmas at Sea is a yearly event organized at the Hyde Street Pier historic ships with sailors and their families dressed as in 1901. Why 1901? David Hirzel, head of the program, sea poet and author, gave me the answer: although the ships in the park operated at different times, the one year in which they all could conceivably have moored at a single pier in San Francisco is 1901. So from 6 to 9pm on December 12, 2009 or 1901, Sam the nightwatch took 14 visitors on a round of all the ships by lamplight. The program featured musicians, sailors, toy makers, the captain and his wife, and a puppet pantomime. Like all living history events at Hyde Street Pier, it was a great reminder of a fact long forgotten: San Francisco was built to be a port.

On Saturday in the afternoon, I went over to the visitor center and reserved a time slot. There wre a few cancellations so I got in easily. At 7.20 pm I showed up promptly at the gate. The uneven pavement was still wet from the day’s downpour. Cablecars decked up with strings of colorful lights honked at the corner of Hyde and Polk, transporting their loud lot of revelers. The ranger on duty circled the number next to my name on the list of 14 signed up on the 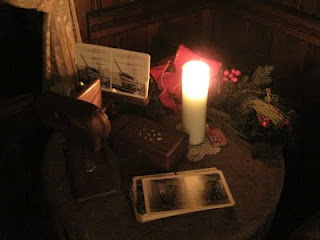 tour. A few minutes late and fresh off the previous tour, Sam the watchman arrived. Beret on the head, lamp in hand, and talking of 1901 as if it were yesterday.

We first stopped at the boathouse on the pier. Sam introduced our group as his relatives and we were ushered in by two elegant ladies, a mother and her daughter. Inside against the wall, an upright piano held a center place next to the tree, and all around the room, low couches, chairs and tea tables.

Our hostess sighed that their real home was up on the hill but this year they were down at the boathouse. Why? An electrician showed up that morning and spent the day wiring up a tree with little glass bulbs so the house would have an electric Christmas tree, just like the one that made its appearance in the White House in 1895.

An electric Christmas tree in 1901 – that must 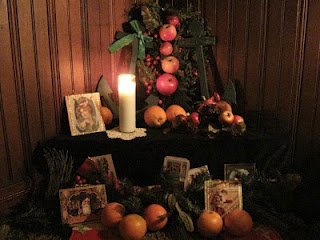 have caused quite a stir in the community even if by then San Francisco was by and large electrified.

There were four boys in the audience and to reinforce her point, our hostess showed them how trees were lit before electricity. At the tip of her fingers, she held candle holders on clips and tiny tapers. Then she showed us oranges she brought to decorate the house. I thought of clove orange pomanders the way I used to make as a kid. The tiny boat house felt wonderfully cozy and I wished we would have stayed there by a fire. 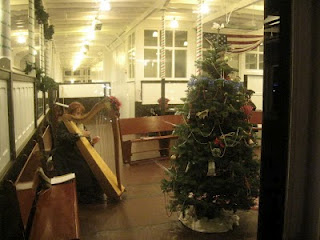 Since there were so many of us, Gene the daughter offered to rehearse the puppet pantomime she was to perform that night. It was “The Blue Bird” a fairy tale part of the “Sleeping Beauty” ballet, whose music had been composed by a young Russian man, Pyotr Tchaikovski. Now, I regretted I didn’t have my girls with me. I had no idea it was going to be so much fun. Alas the next group was already on the house’s steps and we followed Sam out, to the Eureka ferryboat.

It was pitch dark and we walked in a few puddles all right. “Hold on to the hand rail!” warmed Sam as we walked up the stairs to the second floor where a surprise was awaiting us. Through the windows, we could make a few people in elegant attire as well as a 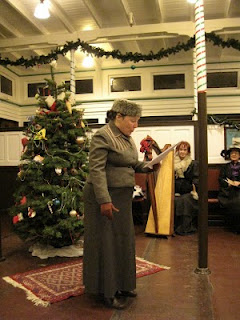 harpist playing on a bench. A Christmas party for us! They were indeed waiting for us to sit on the benches and join in their celebration. The children were asked to find an ornament to put on the tree. We each got a booklet with lyrics to Christmas carols and I have to say, it’s that singing moment that got me into the Christmas spirit for the first time this year. Accompanied by the harpist, “Deck the Hall” and “Jingle Bells” felt very sincere.

Just as I thought we were going to move on, a woman stood up and started reading a story. It was a Victorian Christmas story “that just came out” in the Ladies Home Journal about a little girl in the mines of Colorado. Because of a blizzard, her mining community suffered many shortages. The girl longed for a real doll and worried that Santa Claus wouldn’t be able to go down the chimney because of the fire. After several attempts at directing Santa to their house not through the chimney, the girl’s father removed a windowpane and a miner wrote with charcoal on a plank on the snow “Go through the window.” 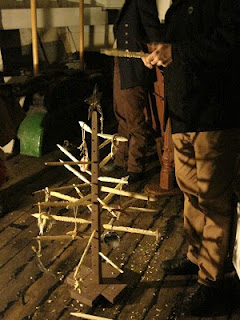 The next morning, the little girl woke up to find the most beautiful doll in her stocking. It was made out of white potatoes, flour sacks and salt bags. All the 16 miners had agreed to not eat the potatoes and carve them instead so the little girl would have a real Christmas. Wasn’t that sweet? I love it even more when I know it was a true story. We said goodbye and under a steady drizzle, headed towards the three-masted Balclutha.

A carpenter (or toy maker) greeted us on the deck and showed us tops he had been making when bored of being docked. They were wooden tops with a string to launch them on a surface. Clever simple tops. The boys were delighted when they each got to take one home. In the forecastle (the foc’sle), three sailors told us the story of their daily life aboard the ship. Twenty eight sailors slept in the non-heated bunk beds and the only mattresses they had were filled with hay at the beginning of each trip. Of course they had spent all their money in San Francisco and had no money left for a Christmas tree so they made one. Indeed, blade in hand, two of them were chipping away on bits of wood to complete the tree. Up on the bare wood branches hung star fish, lids of cans pierced with designs and ornaments made out of a ship’s biscuit.

Made with flour, water and salt, the ship’s biscuit is not exactly your San Francisco foodie biscuit. It’s hard as rock and needs to be pounded to be used as thickener in meals. The three sailors had borrowed money and bought powdered jam, mixed it with pounded ship’s biscuit and convinced the cook to bake it for them. Et voila, cracker hash! We all had a taste and I cannot say that I went for seconds. It’s probably great if it’s the only sweet thing you can have, but otherwise it’s sticky, chewy and sweet. Our next stop was the captain’s cabin so we went outside to get to it. I noticed the lighthouse blinking on Alcatraz across the bay. That night was not a night to swim. Now the rain replaced the drizzle and we all made for the cabin pretty fast. This was to be our last stop as I had to leave before the culminating chantey sing and hot cocoa. The captain’s wife had been shopping at the City of Paris and Bloomingdale’s and brought back bottles of liquor and wine in shoe boxes. In Victorian days, a woman getting out of a store with liquor was not proper so stores provided shoe boxes as a subterfuge. We heard about plum duff, a sailing ship boiled cake, about the carpenter who made a tree out of wood shavings and painted it green, about the captain reading the good book to his crew. It was delightful.

I had to leave but I promised myself I would find it if there were more of these programs. As it turns out, they occur on the second Saturday of almost each month between March and December so keep your eyes peeled for the Living History Players events in 2010. They will be: